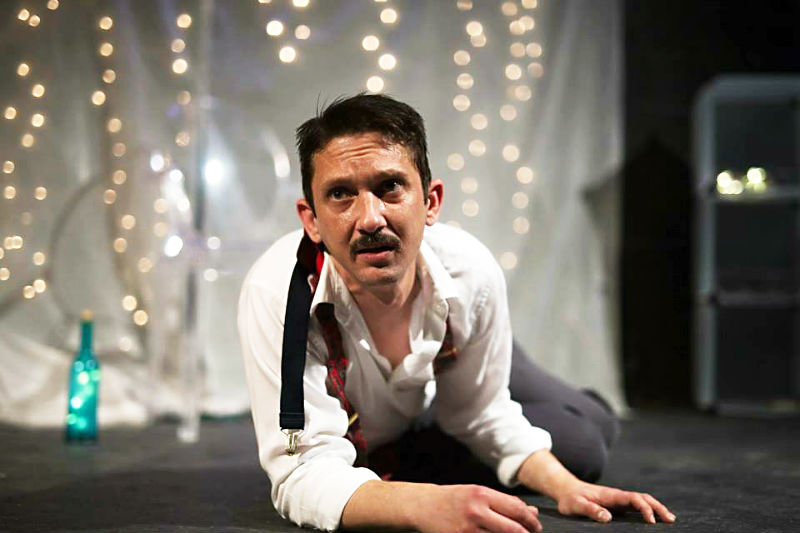 Maxim Vinogradov’s A Night of Stars with Tennessee Williams is a series of snapshots featuring Williams’ encounters with celebrities, aspiring artists, and those closest to him -- memories, most of all, of the impact he had on them, for better or worse. Ferndale’s Slipstream Theatre Initiative has brought A Night of Stars to Ann Arbor for an August run at The Yellow Barn, with Bailey Boudreau playing Williams.

The play's scenes are sometimes funny, sometimes serious, and always well-written. Williams remembers, can’t remember, and hates remembering key moments from his past, which he has probably distorted anyway. We watch Williams cajole some actors into taking roles they don’t really want and bypass others. We see him with friends, family, and his most significant other. There are few surprise revelations to those familiar with Williams’ biography, though some of it is not remembered accurately enough to ring a bell. The fun is in the dialogue and in watching these figures come to life in brief scenes.

A memory play, of course, evokes the Williams classic The Glass Menagerie. Here, we don’t get “truth in the pleasant disguise of illusion” as in Williams' play; instead, we see snippets of what seems like reality, overlaid with Williams’ self-doubt and guilt as he tries to recall incidents from his past.

This is the work of a young playwright, still a student at the University of Michigan, where he won the prestigious Hopwood Award and the Dennis McIntyre Prize for Distinction in Undergraduate Playwriting, both cash awards, for this work in 2017. The Hopwoods can be predictive: Arthur Miller (Death of a Salesman) and Lawrence Kasdan (Star Wars) were winners years back. This is a chance to check out Vinogradov’s early work.

And, oh, that acting company.

Boudreau, who is also Slipstream’s artistic director, creates a complex portrait of Williams with fine support from those who appear in his memories as Elizabeth Taylor, Marlon Brando, Truman Capote, Katherine Hepburn, Andy Warhol, a Barrymore you probably never heard of, his lover, and his mother, among others. 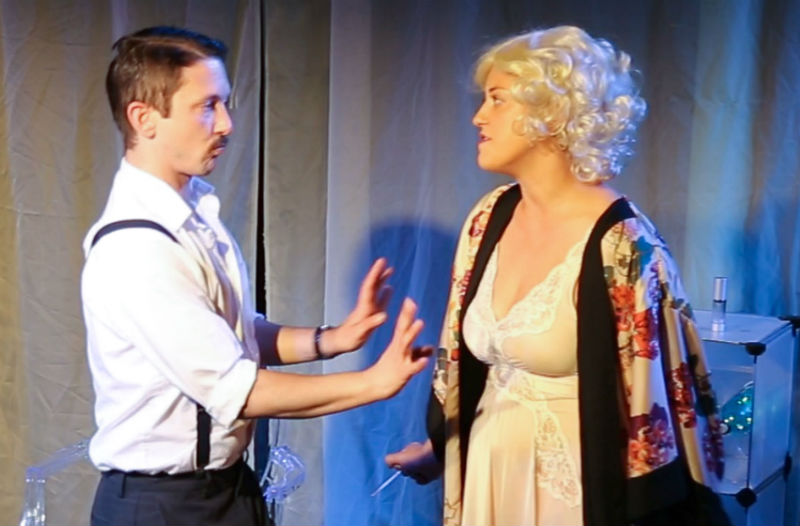 Luna Alexander, co-founder associate director of the Slipstream, transforms completely into the role of Bette Davis -- mean and blond and glamorous -- bringing her strong stage presence and theatrical range to the small role. Alexander becomes Davis so deeply that she may be unrecognizable for those who once saw her in Ann Arbor theaters that have since shuttered, such as The New Theatre Project, The Blackbird, and Brendalinda.

Alexander is an Ann Arbor native, the daughter of a couple who met at the Ann Arbor Civic Theatre; she studied theater at Eastern. Here, she had some help becoming Davis from Boudreau, who doubled as costume designer and is responsible for the production’s clothes.

Others in the fine ensemble are Jackson Abohasira, Steve Xander Carson, Jan Cartwright, Grace Jolliffe, Richard Payton, Jake Rydell, Sarah B. Stevens, and Jeannine Thompson. The production is directed by Mandy Logsdon, with technical support from Ryan Ernst. Slipstream partnered with Ann Arbor’s Theatre Nova for this residency, a remount of the show Slipstream did last year in Ferndale.

Although this is a new play, the ensemble is perhaps best known for revisiting classics in bold and imaginative ways. Alexander appeared as Hamlet when Slipstream set the play in a women’s prison and presented it with an all-women cast; A Midsummer Night’s Dream was set in a gay bar. Although Slipstream has developed a star-studded story this time, there are no stars this adventurous troupe. They work together well, without apparent ego, a rare and authentic acting company that is always worth a look.

Ann Arbor is fortunate to have them here.

Davi Napoleon is an Ann Arbor-based freelance writer. Her book is Chelsea on the Edge: The Adventures of an American Theatre.

The Slipstream production of "A Night of Stars," presented in association with Theatre Nova, runs through August 26 at The Yellow Barn, 410 W. Huron St. Performances are on Saturdays at 8 pm, and Sundays at 2 pm and 7 pm. Tickets are $20. For more information, visit slipstreamti.com.