Road of Life: Laura Bernstein-Machlay will discuss her essay collection, "Travelers," at Literati 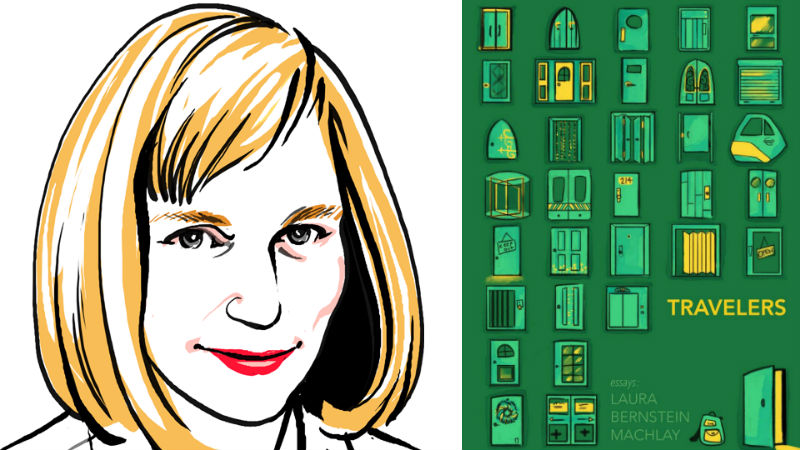 There’s a moment near the end of Laura Bernstein-Machlay’s new book of essays, Travelers, in the middle of the author’s conversation with a friend on page 163, when she makes the comment, “I’m a liar … I’ve lied to everyone I know. I lie to myself every damn day.”

Out of context this excerpt might seem to cast the speaker in an uncharitable light -- an appearance that is ameliorated by having come to know the narrator as a genuine and warm person over the course of the previous 15 essays -- but it’s worth mentioning because it speaks to the heart of one of the challenges inherent in the genre Bernstein-Machlay has thrown herself into with this book. When taking oneself as a subject, how can you ever be sure that the truth is what you think it is? How can you weed out the false from the real in the stories we tell about ourselves, reinforced through repeated use?

“I had to be as honest with myself as I possibly could,” Bernstein-Machlay said in an interview. “And that meant moving past the lies I was so easily telling the world. So much that I was telling them to myself. And they weren’t big lies, they were just the stories about yourself that get you through the day.”

In order to move past the lies, Bernstein-Machlay had to “delve pretty deep and look at myself as the lucky human being that I was … who took a lot of dumb chances and was given a lot of gifts.”

Bernstein-Machlay, who is primarily a poet, came out the other end of this process with 17 essays dealing with an assortment of the author’s experiences. Written as a series of what could perhaps be best described as micro-memoirs, Travelers covers a range of non-chronological periods of Bernstein-Machlay’s life, from her secular-Jewish childhood growing up in “already-crumbling Detroit,” to her years of self-exploratory adolescence, to her roaming 20s, and her life after graduate school, when she settled down back in her hometown, got married, and had a daughter. This multiplicity of place, and the journey between places, is central to the collection as a whole.

“It took me a long time to settle on the title Travelers -- for the longest time this collection was Clutter, which is the name of the second essay … [and] where the whole idea is being stuck and trapped under stuff,” Bernstein-Machlay said. “And I ultimately realized, ‘Oh, it’s not about that at all.’ It’s really about the movement … it’s about that movement between being free-floating and unmoored and being stuck, and where there’s a kind of medium between them.”

But the stories are as notable for the characters woven throughout the narrative as they are for their sense of place. Over the course of the collection, the reader slowly comes to know the author, learning about her family, her travels, and her friends. Gradually, recurring figures begin to take on vivid personalities and become recognizable as the real-life people that they were. From the author’s musical grandfather and her somewhat agoraphobic grandmother to her sometimes-absent mother, Bernstein-Machlay describes the people in her life with a detail that raises them from the page. In a way, this acquits the author of the problem of creating life-like characters: characters taken literally from life have no real need to be compellingly invented. But dealing so closely with the people in one’s life as subject matter comes with problems of its own.

“The challenges were in not harming anyone around me because I really didn’t want to do that,” Bernstein-Machlay said. In this regard and in contrast to some prior practitioners of the memoir genre, she seems to have been fortunate in her source material.

“My family and friends have been loving and generous and kind, and I tried to be that way in response [while writing this book],” the author said. Regardless, when writing honestly about real people some friction is unavoidable.

“I know I made a couple people uncomfortable, and that made me uncomfortable,” Bernstein-Machlay said. “And I changed things just a little. I certainly changed names.”

But only some much can be changed, and Bernstein-Machlay described the process of being honest with herself, particularly about herself, as being somewhat challenging.

“There are things that are hard to write, and having the guts to do it is tough,” the author said. “I found that sometimes when I was writing I would cut a little corner, so it didn’t seem quite so bad, or I didn’t look quite so stupid, and in rewrites I would have to go back and try again, and try to delve into my memory and tell a little bit more of what was the truth. And then truth is slippery, too. You try to get ahold of the truth and it shifts on you.”

Regardless of how successful Bernstein-Machlay may have been in her effort to write honestly about herself, Travellers comes across as a narrative that rings true. It’s full of episodes that harken to a life that is remarkably vibrant and also one that is appealingly ordinary. It speaks of experiences -- about growing up, learning to live, raising children -- that are both unique and make our own memories vibrate with sympathetic resonance. It’s a remarkable and compelling first foray into the memoir genre.

Laura Bernstein-Machlay will be at Literati Bookstore to talk about “Travellers” at 7 pm on August 20.