Out of Many, One Voice: Community Sing with Matt Watroba at The Ark 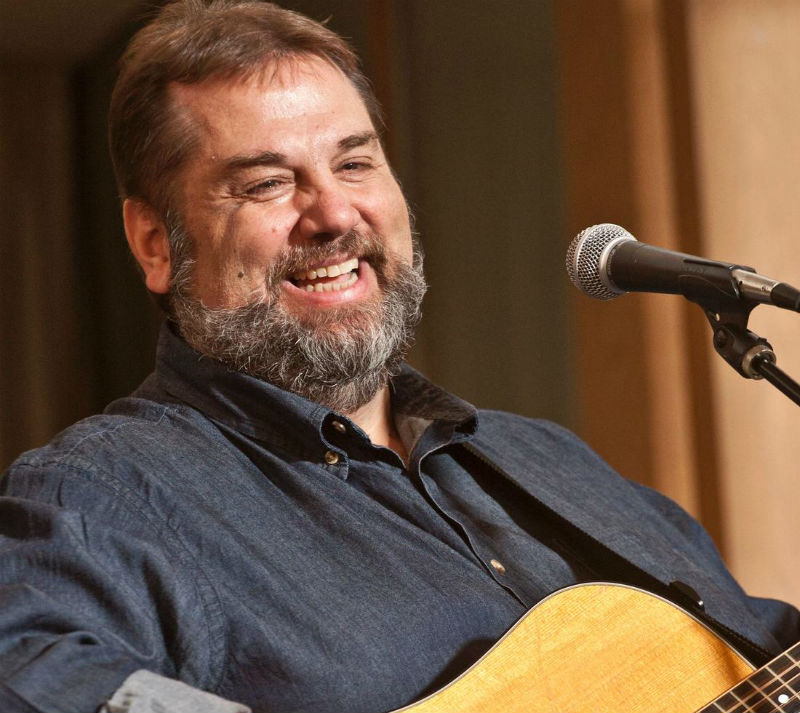 The crowd for the third annual Community Sing with Matt Watroba at The Ark on August 16 was not large -- maybe 50, 60 people -- which was perfect. It allowed Watroba to invite us all to bring our chairs to the flat area in front of the stage and form a large circle. It also allowed him to ignore the microphone that had been set up on the stage and instead move around inside that circle, and lead us in singing without using any amplification.

He didn’t need it.

Watroba has a big speaking and singing voice, very clear enunciation and diction, and is obviously quite comfortable in front of an audience, whether he’s on a stage or not. He should be. His resume includes teaching high school English for more than a decade, hosting his very popular folk music shows at several Michigan NPR stations for several decades, and performing and teaching folk music at varied venues and festivals for even longer than that.

For the past few years, in addition to playing concerts and continuing his work as a radio host (now at East Lansing’s WKAR), Watroba has been leading Community Sings throughout Michigan and nationally. (Locally, he hosts a monthly Sing at the Burns Park Senior Center, on the first Tuesday of every month.) He gratefully acknowledges fabled folk musician and community builder, Pete Seeger, as the inspiration for doing this work, and uses many of the techniques Seeger used to lead similar sings in his concerts and in many other settings.

Watroba began the evening by laying out the rules of the road. Actually, the way he put it was, “There’s not a lot of rules. I don’t care if you’re a good singer, whatever that even means. That’s not a word we use in community sings. You’re a willing singer, or you wouldn’t be here.” Then he added in a flippant aside, “Or you were dragged here by a girlfriend or boyfriend or a husband or a wife.” After we stopped laughing he continued, “You’re here because you love to sing.”

Then Watroba gave us three pointers. Encouraging us to adopt a good posture so we could breathe freely, he suggested we keep an eye on him so we could catch cues for tempo, volume, endings, etc. Finally, he urged us to listen to ourselves and to the group, so we could more effectively and appropriately blend our voices with our neighbors.

He led our warmup by having us hum a note, layered on harmonies, varied the volume, and then we sang "Amazing Grace," Pete Seeger style, elongating and holding some notes, really relishing the words, tones, and harmonies. We sang the African American spiritual “Jacob’s Ladder,” went on to the 1960’s Mary Hopkin hit “Those Were the Days,” with all of enthusiastically belting out the la, la, las of the chorus. In the course of the evening we sang old chestnuts such as “The Happy Wanderer” ("Val-deri, Val-dera, Val-deri, Val-dera ha, ha, ha, ha…"), “Michael Row the Boat Ashore,” and others that are, as Watroba said, “A part of our musical DNA.” But he also introduced us to ones we’d never heard, such as the Civil War era “Run Come and Look Out,” interspersing the songs with commentary about their origins or historical context, showing how they have served, and are continuing to serve, whether as the soundtrack to the Civil Rights movement or as the simple, joyful backdrop of family get-togethers.

Watroba is an expert both at creating an inviting and encouraging atmosphere as well as teaching and leading songs -- choosing easy to follow call and response tunes, or calling out the next lines in the spaces between phrases -- that we all could smoothly join in on every song, even ones that were new to us. We even successfully sang a fairly difficult three-part round, managing to properly negotiate the big range, tricky phrasing, and intricate melody of “By the Waters of Babylon.”

Throughout the night, the sound of the crowd was unified, strong and uplifting, our faces by turns relaxed and smiling, or somber and thoughtful. We applauded after most songs, pleased with ourselves as much as with Watroba. After some of the quiet songs, clapping seemed unnecessary and even intrusive; instead, our silence served as another powerful gesture of appreciation for the beautiful sounds we’d all created together.

At one point, partway through the evening, Watroba asked if any of us felt better than we had when we’d first arrived. Every hand in the room went up.
The intimate atmosphere was totally satisfying and no one, Watroba included, seemed the least bit disappointed by the size of the crowd. There was the sense that his ability to spontaneously, improvise, adapt, and respond to this room and this crowd would just as easily enable him to create a similar atmosphere anywhere, whether he was singing with a handful or a hall full of people.

Early in the evening, Watroba laid out his vision for the purpose of these Community Sings. In the resonant silence that followed the fading last notes of "Amazing Grace," he said appreciatively, “Isn’t that something? What that does is remind us is that at that level of harmony we are not different from each other. It doesn’t matter who we voted for. That is the larger picture of the community sings; it’s to remind us that this is one of those things that brings us together.”