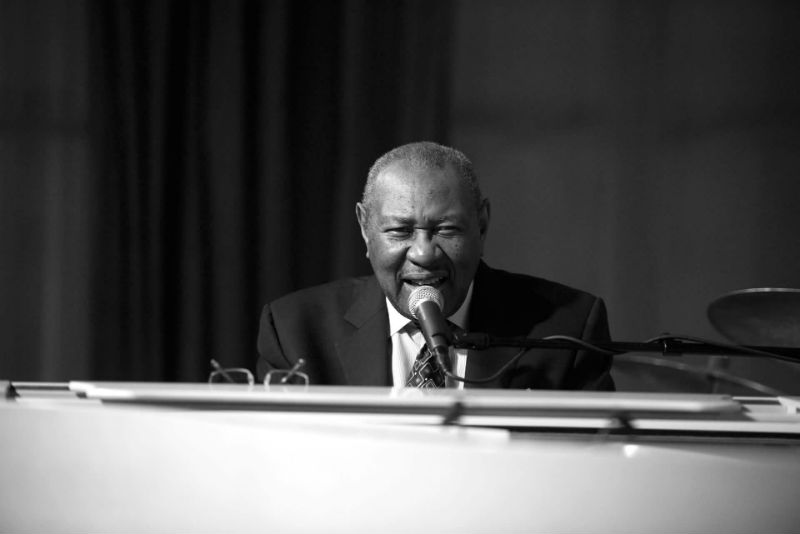 There’s an interesting look that Freddy Cole sometimes gets when he’s playing. It’s not a faraway look, exactly, but it’s as if he’s not fully present, not completely in the moment. Sitting behind the keyboard, he stares off into the audience, looking at them but not really seeing them. His hands move across the piano keys seemingly with a mind of their own, coaxing out chords and picking out melodies. It’s like he’s somewhere else.

At least that’s the impression I got last Thursday at Kerrytown Concert House, where the Freddy Cole Quartet gave a pair of evening performances. Made up by Cole on piano and vocals, Randy Napoleon on guitar, Elias Bailey on bass, and Jay Sawyer on drums, the quartet offered a refreshing and skillful taste of straight-ahead classic jazz.

Over the course of the performance, the group played through a set of some dozen or so tunes, ranging in character and mood from melancholic to playful, but always presented with complete control over the spirit of the music. The band played through its set with only brief pauses between numbers, beginning each new tune even before the applause from the last had died away. In this way, the flow of the performance was never stemmed, which produced an altogether pleasant listening experience. Despite this, at times I found myself wishing they would take a moment to announce the names of particular songs, many of which were absolutely lovely and some of which were naggingly familiar, classics from the long history of jazz.

Freddy Cole himself has strong ties to this storied history. At the age of 86, the musician has been performing for some 65 years. Aside from that, he is the younger brother of legendary jazz musician Nat King Cole, which binds Freddy to the development of the genre both by practice and by blood.

Thursday, for instance, one of the more memorable moments of the performance came with a lively rendition of “Little Girl,” a tune made popular by Freddy’s elder brother, which practically danced in comparison to the mellower music that characterized much of the night.

Throughout the show, Cole displayed the confidence and absolute control over his music that characterizes a master performer. Despite a certain degree of balance issues stemming from the under-micing of his voice, by all appearances the musician still possesses complete assurance onstage, and his laid-back persona carried the set forward in an unhurried manner.

Cole wasn’t the only star of the evening, however, and something must be said for Napoleon, whose clean guitar tone was featured in a large number of solos throughout the set. In contrast to Cole’s skillful but restrained playing, Napoleon’s improvisations were often full of athleticism and dazzle. While in the wrong contexts this could come across as garish, on Thursday night it served to add a refreshing splash of color to the sound palette. This paired with the charming joy that Napoleon seemed to emit while playing endeared him to his listeners. He and bassist Elias Bailey would often exchange looks that seemed to convey a shared pleasure with the moment, a mutual acknowledgment that something cool was going on.

Cole addressed the audience for the first time at the end of the night. With the band settling into a Latin groove, the pianist spoke into the microphone while the group riffed behind him. Thanking the audience members for the warm reception the musicians had received, he seemed to close out with the words, “We’re going to take a pause for the cause, now.” Only a moment later, however, he was getting back on stage. “I’ve been told I know another song,” he said, before he began to sing, with nothing but the pure electric guitar sound behind him.

“How do you say auf wiedersehen / to things you’ll never see again?” he serenaded. It was the perfect question to end a night of wonderful music.