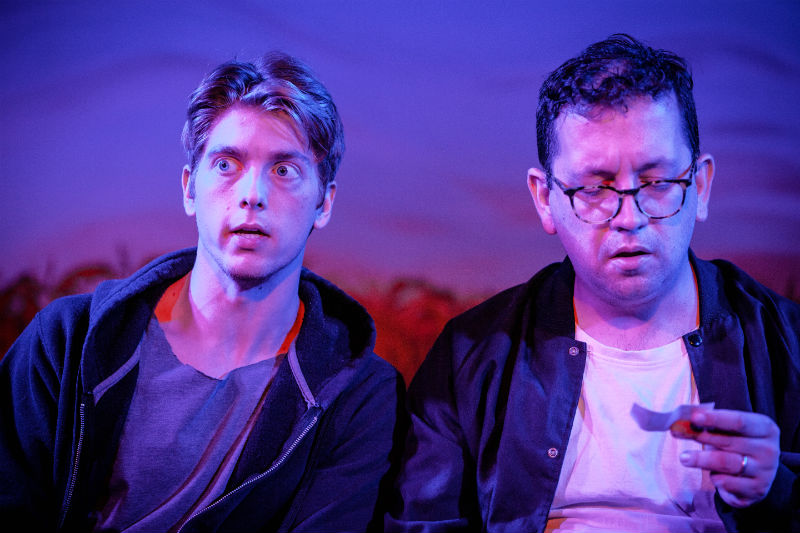 Connor Forrester as Ben (left) and Joe Zarrow as Jeffrey in The Totalitarians by Peter Sinn Nachtrieb at Theatre Nova. Photography by Golden Record Media Company.

Theatre Nova’s September offering, The Totalitarians, centers on a campaign manager trying to help her candidate win an election in Nebraska. The candidate, Penelope Easter, is an earthy, compulsive woman whose tenuous relationship to facts seems, well, familiar. Peter Sinn Nachtrieb’s dark, witty comedy touches on politics, revolutions, and the twists, turns, and perils that come with both.

Q: How did you decide to produce The Totalitarians at Theatre Nova?
Hill: Carla Milarch went to a reading of this show years back, and she and David Wolber [Nova’s producing artistic director] had considered it for the Performance Network. So, when we were looking for shows for our next season, Carla sent it to me, and I thought it was absolutely hilarious. We realized that the September slot was a perfect time to put up a political election farce. I don't think I have ever laughed so hard at a read-through of a script as I did this time.

Q: This show seems to be startlingly relevant. What is it like to prepare for a show like this, one that maybe hits close to home for people on both sides of the aisle?
Milarch: It is startlingly relevant, and the thing I think is interesting is that it was written well before the 2016 elections. I'm often struck at the little, and big, details the playwright has thrown in that capture recent political candidates so well. I think Peter Sinn Nachtrieb's muse was a little clairvoyant. Ultimately though, the play is not about our current administration or current candidates or even any political party in particular, so much as it is about the workings of political power -- how it's given, how it's taken, who bears the responsibility, and the absurdity of it all; emphasis on the absurdity of it all. 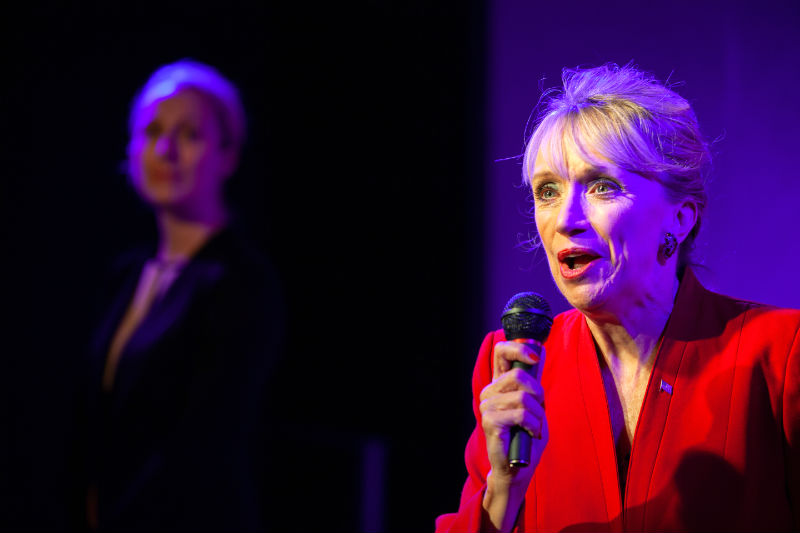 Sayre Fox as Francine (left) and Diane Hill as Penny in The Totalitarians by Peter Sinn Nachtrieb at Theatre Nova. Photography by Golden Record Media Company.

Q: What are the challenges, and the fun aspects, of playing a character like Penelope Easter?
Hill: The challenges and fun of playing a character like Penelope Easter for me is that she is not very smart -- or is she? She has impulse control issues and has no boundaries -- or at least doesn't let them constrain her. She also used to be a roller derby champion, so she's very physical. The closest I've ever been to a contact sport is salsa dancing. And of course, there's that similarity to Sarah Palin, who gained such popularity but wasn't necessarily qualified for higher office. Enough said.

Q: All your shows in this season, and many of your shows over the years, have been either Michigan premieres or world premieres. What is most exciting to you about working on plays that Michigan audiences presumably haven’t experienced before?
Milarch: For me, it's about watching audiences react to a new play they've never heard of before and seeing their excitement about it. I love the notion that when we do a great version of a play no one knows, it helps other new plays gain credibility just a little bit. I think in Ann Arbor, more than in many other places, we have very savvy theater-goers. They are well-educated, have seen theatre all their lives, know and have seen much of what's on Broadway. So, it's really thrilling to find a play like this, that is absolutely brilliantly written, but, because of its edginess, hasn't made it through the New York pipeline. I just love it when we can surprise even our savviest theater-goers and push their envelopes just a bit.

Q: What do you hope audiences get from The Totalitarians?
Milarch: This play is wacky as all get out. It's an absurdist comedy that lampoons political candidates, parties, operatives, everyday citizens and even conspiracy theorists. The play doesn't set out to get a political message across or accurately portray political campaigns. If anything, it's the opposite. It's an all-out, down and dirty romp meant to entertain and provoke, more than anything else. The best and maybe most useful thing audiences will get from the play is an escape into fantasy where they can laugh their butts off. Sometimes, that's just what the doctor ordered.

I think it's worth noting that this play is edgy. There's a lot of strong language, f-bombs, and off-the-wall stuff. We definitely recommend it for adults only. But, if you don't mind a little potty language, you might just pee your pants laughing. Totally appropriate for a night out without the kids.