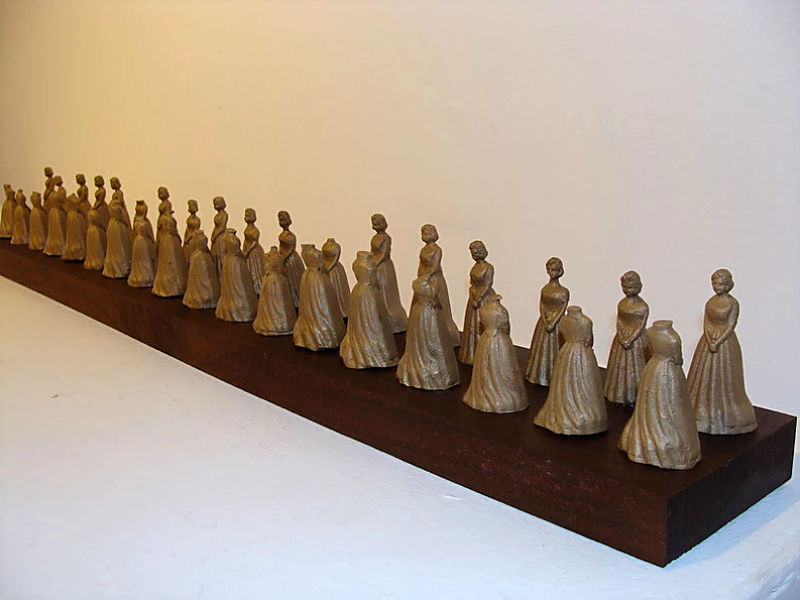 The Ann Arbor Art Center’s most recent juried exhibition asks: “When does action transcend habit to become something more meaningful? RINSE/REPEAT explores concepts of ritual or routine in creative practice, where the experience is intentional, sacred -- not solely focused on the product or outcome, but on the set of actions.”

The Art Center frequently hosts exhibitions curated by guest jurors, and like many of its recent exhibits, the show continues to bring a variety of multi-media works by contemporary artists, both local and non-local. The exhibition as a whole has a strong emphasis on fiber arts and less traditional “fine art” media.

Juror Marlee Grace conceptualized RINSE/REPEAT, which addresses artists’ processes, and has selected a group of pieces that, in different ways, address the often intense, repeated processes behind the finalized works. Grace is most known for her Instagram account “Personal Practice,” where she posts videos of herself exploring movement, and many works in the show comment on movement and motion, approaching the subject of repetition literally.

This is evident in the photograph Streak by Summar Alsemeiry, which represents a car in motion, its subjects almost unrecognizable in a blur of color and line. Alsemeiry’s artist statement comments on the intent of the work, which is “about tracing the shape of routine.” The subject of Alsemeiry’s broader photographic series is driving, a seemingly mundane task. Alsemeiry’s focus is shifting his subject from a quotidian space to “a radical everyday practice that shifts our perspective of time and landscape.”

In an obvious example of engagement with the theme of repetition, the bronze casts of Jan Bogart portray the same female figure in 18 pairs. The 36 figures are the same bride cake topper, though each is slightly different from the next, and many are headless. Bronze casting is an involved process, one that the artist shares in her statement: “Bronze casting requires the repetition of a specific process for each piece: original, mold, wax casting, spruing, investing, burn out, bronze pour, break out, finishing, and preparing for display.” Bogart repeats this step for each replicated piece but notes that, despite their similarities, the mold leaves inconsistencies and unique properties for each cast. Bogart also explains that some of the figures are headless, having been altered specifically to comment on the politics of Prop 8 in California.

Kate Garman (Philadelphia, Penn.)
Blankets
Kate Garman’s work, in keeping with the theme of the show, engages with repetition throughout her three entries in the show. Though only one, her panel-piece Blankets, received best in show, Garman’s visual strategies are coherent throughout. In her statement, she explains her process by saying: “I rely on repetition of shapes and movements to ground me. … The repetitive use of geometric shapes and patterns has allowed me to develop a language similar to that of quilts.” Garman has a background in carpet design, which is evident in both her visual queues and the materials she chooses to work with. The three panels on display from Blankets are from a much larger series.

Madison May (Grand Rapids, Mich.)
Limerence: Missingness
May’s large-scale installation (above left) consists of a pile of handcrafted, oversized pillows. May discusses her process in her artist statement, illuminating what has become, for her, an obsessive, though loving re-creation of consumer objects:

Obsession, infatuation, and the construction of comfort. My work explores the push and pull between euphoria and despair produced by the intense need for reciprocation of affection. … I make absurd replicas of objects that aim to comfort, a giant pile of larger than life pillows, or an enormously wide and heavy quilt. … I obsessively sew patch after patch, or create pillow after pillow, in an attempt to construct my own comfort. … I utilize materials that have history -- collected and used sheets that have been slept in by people I will never know. The history of their presence marks them -- their hair is woven into the fibers of the fabric, wear and tears exist from their use, and stains mark the spots where their bodies once lay.

In May’s installation, not only does each pillow appear larger-than-life, she piles them toward the ceiling, taking up a large amount of space. The pillows appear welcoming, but the pile is off-limits for lounging.

Beth Billups (Ann Arbor, Mich.)
And Then She Took Flight
Beth Billups is a Michigan native who had previously moved to an urban setting and later returned to a rural area. In her statement, she cites this return to Michigan as a source of inspiration for her process-based paintings: “The lack of visual noise here allows me to drink in the quiet beauty of this place and has taught me to see in new ways. … My work is an intuitive reaction to my surroundings and an exercise in abstracting the familiar.” Her works are done in oil paint and cold wax, and they are produced with many layers, colors, lines, and patterns. Billups has three works in the gallery, of which the third place winner, And Then She Took Flight (above right), appears the most abstract. The other two works, When Memory Speaks and Look-See, like their counter-part, represent abstracted landscapes. Unlike the other two works, And Then She Took Flight suggests an aerial view with its large plans of color and patchwork forms.

Calvin Rye (Ann Arbor, Mich.)
104 Maps
Rye’s 104 individual prints are combined on a wall to make up the collective 104 Maps. These “maps” are actually improvised drawings “created with a tool made specifically for this set of drawings.” The installation is inspired by Sol Lewitt’s “concept of ‘The Idea is the Machine,’ that generates the art (or design).” Repetition is evident not only in the quantity of the individual smaller works but also in each drawing, with a variety of singular line work.

Jennifer Meade (Grand Rapids, Mich.)
Cosmic Landscapes
Meade is an artist concerned with ritual. “Even through the process of creating installations, I carry intentions to bring a sacred nature forward. The process is just as important as the end result when creating.” Her work consists of white rope arranged on the wall. Meade's works are multi-disciplinarily, concerned with issues of identity, and she executes her art through murals, installations, and music-making.