Through Molly’s Eyes: The Kickshaw Theatre Takes us to "Milvotchkee, Visconsin" 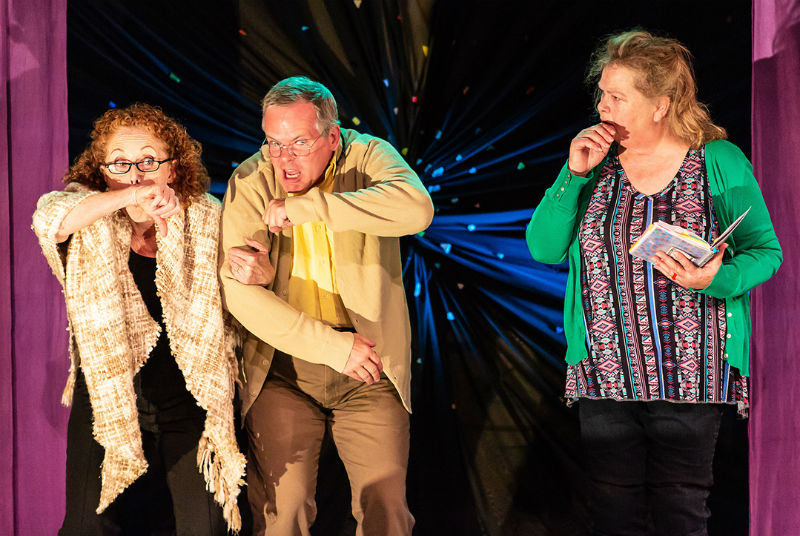 Molly has a hole in her head. Memories are escaping through it. Her doctor thinks that’s entirely possible. At least, that’s the way Molly hears what he says.

Fred Smith, who built a statue park in Milvotchkee, Visconsin--Molly gave tours of the park for many years -- was struck by lightning. He lived for 12 years after that. What happened during those years? Molly is obsessed with this story, which may or may not have some relationship to reality.

The Kickshaw Theatre’s current offering, Laura Jacqmin’s Milvotchkee, Visconsin, is set in various locations in Milvotchkee, a place you won’t find on any map, and in Molly’s mind as she descends into dementia. Molly encounters a variety of people in places that include a hospital, a movie theater, and her distorted memory.

Most stories about people with dementia or mental illness -- anything involving a distortion of reality -- are told from an objective or third person viewpoint. We might sympathize with the victim of disease and those who suffer the loss of the person as they once knew her. Caretakers are either objectively uncaring, or they do their very best and are sometimes misunderstood. Children may be helping their parents or taking advantage of them, and we have a good idea what’s what. Not so here. The story is told entirely from Molly’s perspective, and we can no better evaluate reality than Molly can.

Some characters appear as real people and others as cartoon characters -- that’s how Molly experiences them -- requiring a mix of realistic and stylized acting, something this company approaches gamely and well. Everyone in the six-person cast but Molly (Nancy Elizabeth Kammer) and her late husband (Michael Hays), presented as an idealized memory, plays at least three roles, some realistic, some not. (Dave Davies, Aral Gribble, Brenda Lane, and Sonja Marquis are the others.)

Director Lynn Lammers also effectively blends styles. We see Molly imagine an attempt to guide a tour as she must have done many times. We see her use Post-Its to remind her to do this and that, and when she throws them up in the air -- she can’t make use of them anymore -- the stage, flooded with many Post-Its than Molly could possibly have used, signals her frustration. Lammers is nicely supported by scenic designer Gabriella S. Csapo, lighting designer Alex Gay, sound designer Will Myers, costume designer Camille Charara, props designer Rebecca MacCreery, and production stage manager Paige Conway.

Telling Molly’s story entirely through her eyes is a bold choice for Jacqmin, and a problematic one.  For starters, Molly’s perspective isn’t all that interesting. She has lost her ability to remember and to process current experiences, so there is a sameness to much of what she experiences. The play draws spectators in for a time, then lags. From the get-go, we see Molly in a state of dementia, and since she has no capacity for growth, her character has no place to go. Still, the play packs an emotional punch, and it is sometimes painful to watch.

The adventurous Kickshaw Theatre always does works you won’t see anywhere else in Michigan and rarely anywhere else outside of Michigan either. Lynn Lammers, the theater’s co-founder and its artistic director, searches for the unique and exposes Ann Arbor audiences to different kinds of theatrical experiences. When a theater goes out on a limb, sometimes it will uncover gems -- The Electric Baby, staged by Lammers, and Or, directed by Suzi Regan were brilliant productions of plays worth discovering. Sometimes, the work will be flawed. But it’s generally worth checking what the risk-takers at Kickshaw attempt.