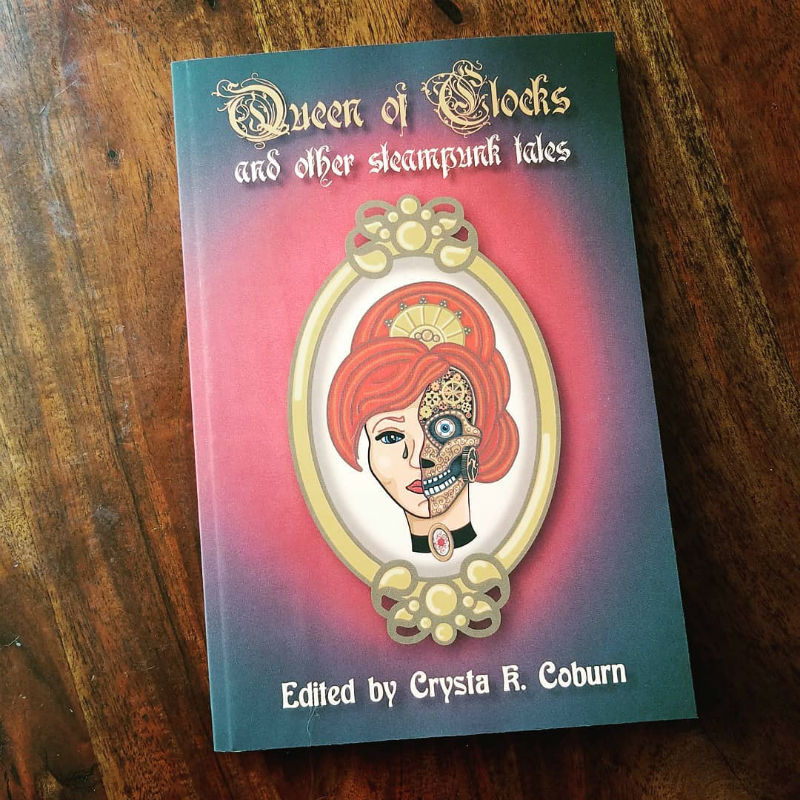 Artists, whether of visual, performance, musical, or writing persuasions, are highly imaginative and generally motivated individuals. The trouble with surrounding yourself with creative people is that you want to create. You throw ideas out there, bounce them around; sometimes they land, sometimes they float away into the ether. It’s most fun when they land, but that can also mean a lot of hard work for these ideas to claw their way to fruition.

For example, a year of pummeling away at stubborn obstacles, wrangling six other people, recruiting still more people to help in the fight, battling back and forth with a totally uncooperative corporate entity whose official help policy is “we don’t help.” It’s frustrating, it’s time-consuming, and it’s so worth it. Seeing your name on the printed page provokes a singular, feeling of satisfaction and accomplishment. Before long, you’ve forgotten all the pain and miserable moments, and you can only think about doing it again.

My journey with the recently released The Queen of Clocks and Other Steampunk Tales, which I edited, contributed a story to, and self-published through IngramSpark, began in the summer of 2017. My husband (who ended up writing the title story under the name Thomas Gregory) and I were attending the second year of the Motor City Steam Convention, where we both served as guest authors and panelists. The steampunk community is a wonderful wealth of creativity, and I love to see the plethora of ideas people manifest and swap stories with them.

A lot of steampunk is fantastical, and just about anything you can imagine is out there. I have seen steampunk submarines, sea creatures, flying machines, flying creatures, pirates, fairies, witches. A common place to draw from for steampunk is our shared histories of folk and fairy tales. I have long been a lover of fairy tales and how the basic plots transcend cultures and evolve over time and place. Wouldn’t it be fun and interesting, I asked my fellow steampunk writers at the con, if we were to make a book of steampunk fairytales? They each answered with a resounding, “Yes!”

Well, I thought, I’m a writer and an editor, and I was a book-buyer for five years, so I knew a little about producing content and how to get it into stores. Enough writer friends had self-published their own varied works that I felt confident I could follow in their footsteps. I announced that I would publish an anthology.

Unfortunately, a few months after the con, when I was still in the honeymoon phase with this project and very little was written (mine was the last story to be completed, as it turned out), I changed career paths, leaving a nearly full-time hourly job for a part-time one. This would ultimately mean more time for freelance but also learning an entirely new position, which takes up a fair amount of brain space. About that same time, my first author, Aaron Isett, submitted his rough draft, a steampunk version of the sirens story from Homer’s Odyssey, and it hit me: “This is real. It’s happening. I better get working!”

I knew early on that I wanted to publish with IngramSpark because I was already used to working with the Ingram Content Group, possibly the nation’s largest book distributor to independent bookstores and with print-on-demand services in Australia, Europe, and the UK. Unlike many independently published authors, I was adamant my book would be available to bookstores and not Amazon-only.

After the Amazon acquired and began dismantling the popular self-publisher CreateSpace, I watched irate authors flee like rats from a sinking ship. CreateSpace books were always a problem for me as a book-buyer because not all CreateSpace published books were available through Ingram, and if they were, the discounts were not enticing (often 10% as opposed to Ingram’s usual 40%) and the book was never returnable. Amazon-only books were right out since Amazon is not a wholesale distributor to indie bookstores. And I got several earfuls from indie published authors who were angry when I rejected carrying their book in the store for these reasons.

So, to me, with this background, I decided Ingram was the best choice for what I wanted to do. They offer two ISBNs for a single price (one for ebook and one for print edition), and with some simple currency conversions on my part, they would put my book in the inventories of Amazon the world over, Barnes & Noble online, Book Depository, Indigo (Canada’s leading bookseller), and more, as well as the independent bookstores and library markets that I wanted.

It turns out there was just one hitch: Ingram is notoriously picky! And their live help service is less than helpful, bless their hearts. I went back and forth for months with my cover artist, Bess Goden, who also contributed the Hans Christian Andersen tale that opens the anthology. Ingram said we needed to change some details in order for the image to be acceptable for their printers. I would upload the image to Ingram, wait a few days to hear back on what needed to be fixed, report back to Bess, upload the new fixed image, wait for Ingram to tell me what else needed to be changed, and on and on until I finally decided to ignore Ingram’s neverending warning about color choices and finalized the cover. (The cover looks fine. The colors don’t perfectly match the ebook cover’s image, and I’m OK with that.)

I went back and forth in a similar fashion with an author in the U.K., Paul Hiscock, over formatting the ebook. Paul is far more experienced than I with the coding required of an ebook, and he was a saint to dive into that for me, ferreting out the problems until Ingram accepted that, too.

Working with my fellow writers was not difficult, although, sometimes time zones slowed the process: Phoebe Darqueling (contributor of a steampunk “Pinocchio”) is now based in Germany, and Victoria L. Szulc (who reimagined “Sleeping Beauty”) is in St. Louis, Missouri. Working with six writers allowed me to be more flexible with the submission deadline when I really believed in a story, such as with K. Gray’s take on “The Little Mermaid.” (Gray also volunteered as a proofreader.) While finalizing the edits on a story with one writer, I could also be doing my first read-through of another story, like an assembly line. Everyone really believed in the project and has helped with promotion as well as the creation of the book. For some, it was their first time in print, and I am thrilled to be able to share that special joy with them!

For anyone considering self-publishing, I suggest looking at all the options. There are multiple formats to consider, ebook or print or both, and several presses online and in your own community eager to publish. From my experience, I find it easier to sit down with someone in person to discuss the details of a work rather than playing tag with someone via email or wading through help forums.

The Ann Arbor area is home to several presses available to self-publishers, such as Fifth Avenue Press, Thomson-Shore, and McNaughton & Gunn each offering different options and levels of aid. The Ann Arbor District Library hosts the Emerging Writers Workshop, a resource that I have often tapped. And, of course, the writing community the world over is full of brilliant minds that are more often not willing to lend a helping hand because we all know that delight of having our names in print, and we are eager to share.

"The Queen of Clocks and Other Steampunk Tales" is available at Bookbound and Crazy Wisdom in Ann Arbor, Think Outside the Books in Ypsilanti, and Kobo, Amazon, Barnes and Noble.