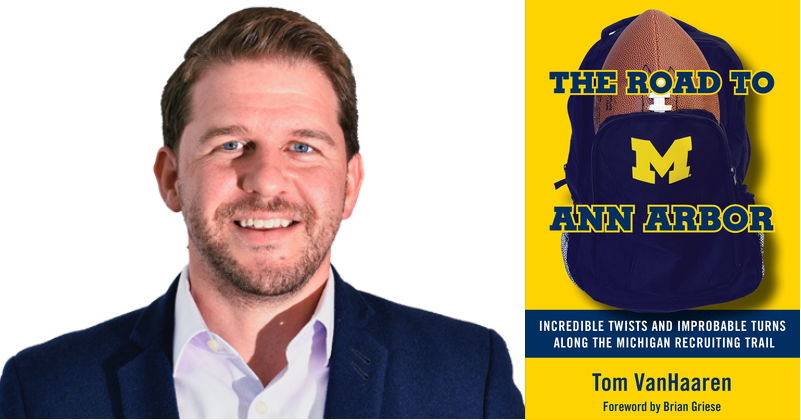 There are as many stories of how to make it to the Big House as there are players: a 1968 recruitment by a memorable assistant coach, the near misses of some of the biggest names, and all those stories about Bo.

ESPN journalist and Michigan native Tom VanHaaren tells all these tales and more in his new book, The Road to Ann Arbor. VanHaaren has reported on college football and recruitment since 2011, starting his career covering Michigan football.

The catalyst for this book came from an interview with Bobby Morrison, a former recruiting coordinator. VanHaaren says, “[Morrison] still follows recruiting pretty closely and after we finished talking about the story I was working on, he told me that he had some great recruiting stories from his time at Michigan.”

The first story Morrison told VanHaaren was how Tom Brady came very close to ending up in another program.

“This sparked an idea that there were very likely more stories like that one that haven’t been told, stories that predate the internet and are about the recruitment of some of the great players that have come through Michigan,” the author says. “I reached out to some bigger names ... and found that there were a lot of great stories out that there that players were eager to tell.”

The first story wound up being the opening chapter in the book, about offensive lineman Reggie McKenzie. The former player, recruited in 1968, remembered every detail. “It was incredible,” VanHaaren says. “He told me about the assistant coach who recruited him and that he would be a good addition to the story.” This led to the author contacting that coach, a man in his 80s by the name of George Mans. When VanHaaren finally got Mans on the phone, the former coach "remembered every single detail of Reggie’s recruitment. He said there were certain football players that made an impact on him and Reggie was one of those guys. … [Mans] thought so highly of him that the story always stuck with him.”

Van Haaren’s engaging writing style and attention to detail make the book accessible to both hardcore fans and those who haven’t followed the sport as closely. “Whether you’re a fan of recruiting or not," he says, "I think this book is still for you because it takes you through the decades of Michigan football in such a unique way. It starts in 1968, through the '70s, '80s, '90s and through the 2000s and provides some great anecdotes of how Michigan’s history was formed.”

To ensure the reader gets the whole story, VanHaaren talked to “the player or a family member, a Michigan coach, an opposing coach, a high school coach, high school teammates, whoever I could get to talk that knew the story.”

And yes, plenty of stories in the book detail players’ recruitment by Bo Schembechler. “Everyone recruited by Bo has a story and they always tell it in their Bo impersonation. Hearing these stories and how much they cared for their coach was a big thing that I took away from writing this book.”

As VanHaaren explains it, the stories in this book show a different side of Michigan history that hasn’t been told before, such as how Desmond Howard almost didn’t get an offer and Chad Henne almost got kept away by an opposing team. “That coupled with why they ultimately chose Michigan," VanHaaren says, "and what made them fall in love with the program, I think, makes for another piece of the puzzle to Michigan’s history.”

VanHaaren reads from "The Road to Ann Arbor" at Nicola’s on Wednesday, October 3 at 7 pm.