Open Book: Hip-hop MC and singer Dessa reveals her life and loves in "My Own Devices" 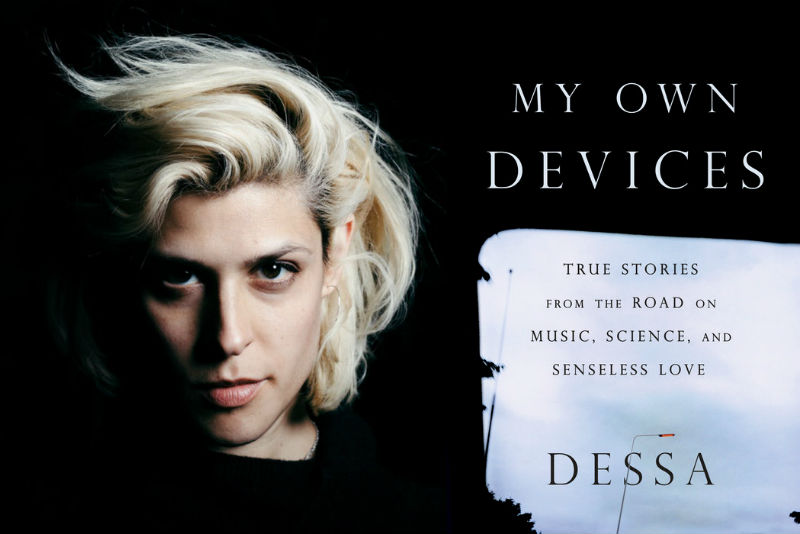 I'm out here, arms wide
Hiding nothing
I've done it all in broad daylight
And I left the cameras running

That’s an apt characterization of her new autobiography, My Own Devices: True Stories From the Road on Music, Science, and Senseless Love, too, where he chronicles her 15-year career with the fiercely independent Minneapolis hip-hop collective Doomtree. The book is an honest, clever, humorous appraisal of her family, career, and P.O.S., the Doomtree rapper with the highest profile and the longtime love of Dessa’s life. He’s referred to as X throughout the book because that’s what he is -- her ex-boyfriend. He’s still a member of Doomtree, and for years Dessa and P.O.S. have done the delicate dance to keep their group together and their solo careers growing even as their romantic relationship swung wildly between emotional hills and valleys as they rode coast to coast in a tour van.

“The task was to try to hide that, to try to not look like we weren’t getting along, and I’m sure we failed miserably at that and the tension was obvious,” Dessa said by phone between flights. “But a lot of times, I think we were able to keep the tension out of the van, to keep it to ourselves, keep it in the back with our luggage. That meant being nice, being cordial, making sure nobody had to worry about us.”

But their troubles weren’t exactly a secret, either. If you listen to Dessa’s music -- whether her solo albums or her features on Doomtree-associated songs -- you hear how the multifaceted MC and singer has chronicled, in detail, heartbreak and love throughout her career.

“As a songwriter, my primary interest is in true stories,” she said. “So almost anything that sounds like it could have happened in a song is literally true -- with some exceptions where I’ll take creative license or where I’ll craft a really surreal metaphor that is quite obviously a departure from literal fact. But even most of the dialog in my songs is verbatim.”

Dessa’s dextrous way with words for hip-hop rhymes serves her well in My Own Devices, where she frequently turns out sentences that could have easily been turned into lyrics.

“I think I’m just a sucker for language at the sentence level anywhere I encounter it,” she said. “So if there’s an opportunity to turn a phrase in an interesting way in an email or a conversation or a script, I love when people take that opportunity. I find it delightful. I think a lot of whatever voice I’ve built as an author probably works at that granular language level. And I just love hearing language used in unusual, funny, or creative ways and I love using it in novel ways myself.”

Hamilton creator Lin-Manuel Miranda was so impressed by Dessa’s word skills -- not to mention her commanding delivery as an MC and soulful presence as a vocalist -- that he asked her to do a song for The Hamilton Mixtape (2016). It raised her profile some, but for the most part, Dessa is still a scrappy, DIY artist who’s hustling to explore every avenue of creative expression that comes her way, from penning an opera to scripting a podcast, and continuing to write long-form prose and create music.

“Having an interdisciplinary career is enormously satisfying to me,” she said. “I think it might also be a little off-putting to prospective [business] partners sometimes because it doesn’t lend itself to an elevator pitch easily. That said, I have had the opportunity to chart. No. 3 on the alternative charts and both my most recent records have been on the Top 200 Billboard, which is awesome because we’re a group of friends who met in our late teens and early 20s and we’ve been doing it by ourselves for the most part.”

P.O.S. was one of those folks she met way back then and he was also the person who brought her into Doomtree. Their connection is so deep and long, from artistic to romantic, its no wonder they’ve had a hard time moving on from each other. As detailed in the book, Dessa has had such a hard time shaking P.O.S. that she went through a neuroscience project that attempted to basically remove that love for him from her brain. But she’s also evenhanded when writing about her ex, taking great troubles to tell her story without stepping on his.

“I hope it doesn’t feel like I’m airing dirty laundry,” Dessa said. “It’s really important to me not to have written an exposé. I have no interest in throwing anybody under the bus, and I don’t think secrets are interesting in their own right. But I have led a candid life, I think, in the interest in trying to make good art, and there’s something powerful in that. That said, there’s things that I don’t write. There are secrets that are mine to keep. But I think I’ve got fewer of them than the average pedestrian you’d encounter on any street. It’s harder to corner me because I’ve already spent all the ammunition that an enemy might try to use against me. I feel like it’s very [Eminem in] 8 Mile: “I already battled myself!”

Dessa has nothing to hide.

Dessa reads and signs her book "My Own Devices: True Stories From the Road on Music, Science, and Senseless Love" at the Ann Arbor District Library’s downtown branch on Friday, October 12 at 7 pm. The event is free and books will be on sale.