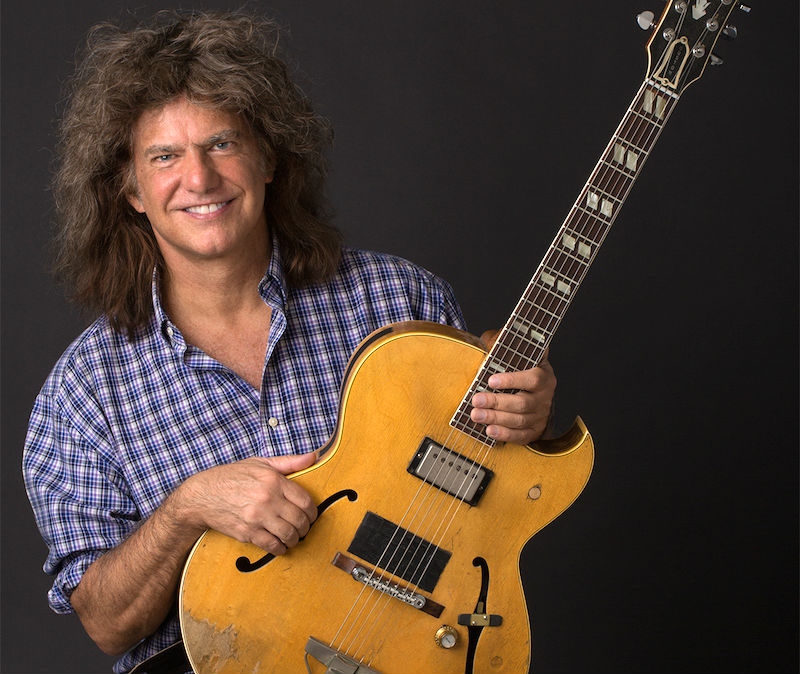 World-renowned guitarist and composer Pat Metheny has written a lot of music over a 40-plus-year career, and with his current tour he is taking the time to dig deeper into some of the older material. Rather than release an album and tour new tunes, he decided to put a small group of consummate musicians together who are capable of playing a wide variety of his music from across the decades. But don’t call this a retrospective. Instead, it’s more like research. The players are digging into the old tunes and finding new pathways to navigate. Metheny has clearly chosen his bandmates to be able to find fresh ways to improvise over his material.

Metheny’s UMS-sponsored performance on October 10 at Ann Arbor’s Hill Auditorium felt surprisingly intimate considering there were 4,000 people in attendance. The stage was set up almost like a rehearsal space, with the supporting musicians arranged in a tight circle around Metheny. The band played loose, keeping arrangements minimal and playing off of each other throughout the set. Metheny came out first, performing a beautiful solo piece on the 42-string Pikasso guitar, built for him by luthier Linda Manzer. The guitar itself is a work of art with a huge range, and Metheny used the whole instrument, fretting deep bass notes with his left hand while improvising beautiful harp-like melodies on the drone strings. Following that first piece, the rest of the band took the stage, and the energy kicked up and stayed up for the rest of the night.

While drummer Antonio Sanchez has been playing with Metheny for nearly 20 years, bassist Linda May Han Oh and pianist Gwilym Simcock are newer collaborators. The first set was long -- 12 songs with no talking between tunes -- but time flew by as the band moved from mellow Latin and surf-inspired tunes to highly energetic interpretations of songs from Metheny's early records and on to sparse, super-melodic pieces from #Secret Story# and other more spacious records.

Metheny’s on-stage energy was intense and joyous. Each piece seemed to feature a different combination of instruments. Of particular note was a long drum solo during “James.” The song has a formal structure of 10 bars, 10 bars, 8 bars, 10 bars, and Sanchez would play alone over the 10 bar sections and then Metheny and Oh would join him on the 8 bar bridge. They kept the form of the tune for about four choruses while the drums became more and more intense. It was an unexpected but creative choice for a piece that is quite mellow on the original recording. Overall, it was obvious that the musicians were enjoying each other’s playing and, of course, the crowd loved every minute of the set.

After playing for over an hour, Metheny went to the mic, introduced the band, and chatted with the audience for a few minutes. The second set was shorter but had some of the high points of the entire evening. At one point the drummer and pianist exited the stage, leaving Metheny and Oh to play a duet that strongly featured the bass. Metheny spent most of that tune playing rhythmic counterpoint to Oh’s beautiful and consistently creative improvised lines. Following that performance, Oh left the stage and Simcock joined Metheny for a second duet. There was some beautiful melodic interplay and lots of very organic trading back and forth between guitar and piano. Next came Sanchez for a duet between drums and synth guitar. This is the point in the show where Metheny got most creative, playing everything from pretty melodic lines to screaming noise and string scratches. Sanchez coaxed unusual sounds from the cymbals and drums that made it hard at times to figure out who was playing what. In each of these duets, it was easy to see how much respect and admiration Metheny has for his bandmates. Even from the back where I was sitting the positive energy was obvious.

Metheny has a huge catalog of music and it would be impossible to cover everything in one show, but it was very cool to get the opportunity to hear work from across his career all in one night. The instruments he plays are also worth noting. Aside from his Gibson ES-175, which he played for most of the evening, he used the guitar synth and the Pikasso, and an incredible sounding archtop guitar with nylon strings. Daniel Slaman made this guitar and Metheny used it on some of the more mellow tunes. It had a clear tone that somehow managed to feel both mellow and present simultaneously.

A good live show should have incredible energy, a variety of musical moods, an appreciative crowd, and a band that looks and sounds like they are having fun on stage. Pat Metheny and his band brought all those elements together for an incredible evening of music this past Wednesday, and those of us lucky enough to be in attendance were the beneficiaries of the band members’ dedication to their craft.