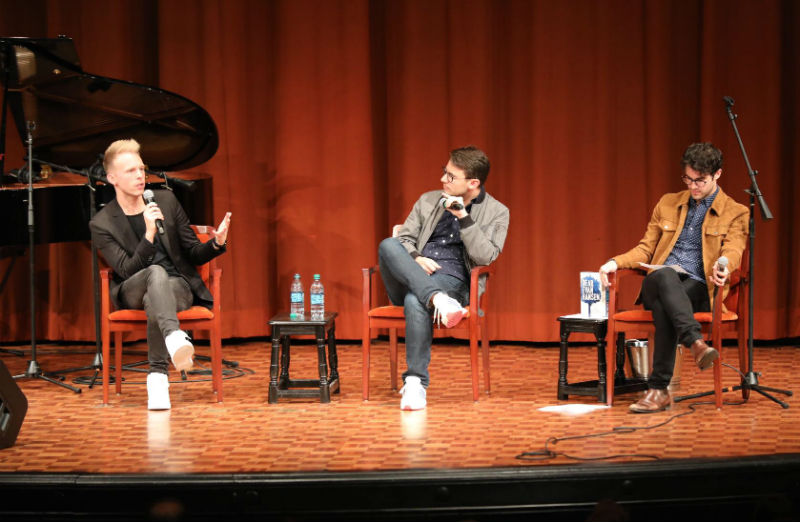 At one point during Thursday night’s sold out, joyous on-stage conversation with Grammy, Tony, and Oscar award-winning songwriting team Benj Pasek and Justin Paul -- who met and started writing songs together when they were U-M musical theater students (’06) -- surprise guest moderator Darren Criss (Glee) stated what many of us were thinking: “Collectively, we’re a Michigan EGOT.”

Yes, Criss (’09) arrived in Ann Arbor fresh off his Emmy win for The Assassination of Gianni Versace: American Crime Story, while Pasek and Paul came to promote a newly released novelization of their hit Broadway show, Dear Evan Hansen.

But the nearly two-hour event, presented by Literati Bookstore at U-M’s Rackham Auditorium, mostly felt like a chance to crash a reunion of really talented, witty friends who’d also, along the way, perform a few songs and a short reading.

There were occasional wireless microphone problems, thanks to the presence of ESPN's College GameDay on campus, but even this just provided more opportunity for the three artists to play off each other. For instance, after struggling repeatedly with his mic, Paul accepted a second and talked into both, and Pasek quipped, “This is our relationship in a nutshell.”

In truth, though, this applied to everyone on stage. Pasek and Paul began by talking about how, as U-M freshmen, they’d bonded over being the worst dancers in their ballet class. Paul mentioned that the instructor often asked the students to perform, one by one, a sequence across the Power Center rehearsal room.

“It’s very unnerving if you’re terrible,” said Paul. “We figured out that we could go out the side fire exit, run around the building -- ”

“-- enter back in the other side, then strike a pose,” finished Pasek.

Not shining as brightly as others in one of the most esteemed musical theater programs in the country was, ironically, what put the two on the path to meteoric success. Pasek explained that he’d written some pop songs in high school, and after noticing that what Paul lacked in dance ability he more than made up for at the piano, Pasek asked Paul for feedback. They ended up writing four original songs together during their freshman year.

“Then sophomore year rolls around and we’re like, ‘OK, we’re bad dancers, but we’re definitely going to finally be cast in City of Angels, this is our moment,’” said Pasek. “And Justin gets cast as a Coroner-slash-Backup Dancer, and I was cast as the Man With Camera-slash-Flapper Boy. … I remember [U-M professor] Mark Madama on the first day of rehearsal trying to be super-inclusive. He’s going, ‘Everybody in the show matters. … Everybody is so vital.’ And then he looks directly at me and he goes, ‘Even Man with Camera.’ … [Paul and I] were like, 'You know what, if we’re not going to get cast in City of Angels, we’re going to write our own show. We’re going to show them.'”

Criss, who also played small roles in U-M theater and drama productions -- and thus went on to co-write and star in the viral cult hit A Very Potter Musical while still a student -- cheekily responded, “I did the same damn thing, man. It worked out just fine,” then high-fived Pasek.

Dear Evan Hansen, which premiered on Broadway in 2016, tells the story of a teen with social anxiety who, following the suicide of a classmate, tells a lie that ends up drawing him into the circle of the classmate’s family.

“In my high school, there was a kid who passed away, and I remember coming back from summer break,” said Pasek. “People who weren’t really close to him when he was alive became his best friend after he died. And I was guilty of it, too. I was coming up with memories. … I was inventing this place for myself in this kid’s life. Like, it was technically true, but definitely I was embellishing because I’d wanted to be part of this tragedy that I had no real right to be a part of.”

Pasek originally had a conversation about this with Paul when the two were in a musical theater history class at U-M’s Bell Tower, and from that, they talked about similar responses to 9/11 and celebrity deaths.

“Whenever someone famous passed away, people started posting -- and we were noticing that they were really posting about themselves,” said Paul.

“There was this desperation to publicly mourn, for other people to notice you, and that was really striking to us,” said Pasek.

The team’s first attempts at telling a story related to this idea were “an intense and dark condemnation of our generation and our society,” said Paul. But once Pasek and Paul began collaborating with the show’s book writer, Steven Levenson, “we started to pivot toward telling the story from a different point of view,” Paul explained. "We could say, ‘What it is it about you and me, all of us -- how are we so disconnected … that the opportunity to be part of something, whether it’s posting about a celebrity death, or 9/11, or a kid in your high school dies -- there’s this need that we have to become part of that story. What makes us feel so lonely that we would be in that place where a small lie, a little embellishment, would suddenly grant us this community we don’t have?’”

Broadway musicals don’t usually spawn novels -- if anything, it works the other way around. But Pasek talked about how the overwhelming response he and Paul have received from Dear Evan Hansen fans was part of what made a book (written by Val Emmich, with Levenson, Pasek, and Paul) a logical next step.

“A little ways into it, we thought, we don’t want this to just be a story you can only access if you pay a Broadway ticket price in one city in the world,” said Pasek. “We want to democratize it a little bit and put it out there in the world.”

“I think we felt like, even writing the show, there was so much material, so much backstory with these characters, that in the necessary economy of a Broadway show -- which, you’re going to spend two and half hours at the theater, max -- there was so much that we didn’t explore. So many characters that we barely got to know. … We wanted [the book] to feel like oh, this could be its own piece. It can stand on its own. Our dream would be that in five to 10 years, people are like, ‘Oh, the musical that’s based on the book.’ That would be fine with us because the book is basically the expanded, deepened, enriched sort of version of the story you see on stage.”

Criss pointed out how Dear Evan Hansen has a good bit of humor and asked whether balancing that with the tragedy at its center presented a challenge. Pasek and Paul responded that they’d been most nervous about a raucous, comedic number in the show (“Sincerely, Me”) that follows a scene where Evan meets his deceased classmate’s family.

“I remember the first preview of the show in D.C.,” said Paul. “We were holding our breath because people were going to think this is disgusting, or it’s really funny and go along with it, and if they go along with that, then we’ve got them for the show.”

“As soon as laughter started happening, and rippled throughout the house, [Paul] came up to me and Steven, our collaborator, and he was just shaking his head in a sort of manic way and said, ‘Americans!’” said Pasek.

During the evening’s talk, Criss performed a dramatic reading of the book’s prologue; Criss and Pasek performed “Waving Through a Window”; U-M faculty member (and Pasek and Paul’s former classmate, with Broadway credits of her own) Chelsea Packard provided the evening’s most moving moment via “So Big, So Small,” in addition to performing “Only Us” with her husband (and Broadway veteran) Geoff Packard; and Pasek, Paul, and Chelsea Packard ended the evening with a powerful rendition of “You Will Be Found,” which features the mantra-like refrain, “You are not alone.”

“I think we just want to play one small piece in that conversation where, if you feel alone, or you feel like you’re not a part of the world, or you have been in a dark, dark place, that you will realize that that feeling is temporary, and you will realize that the loneliness that you think is unique to yourself is so universal, and there are so many people who are struggling,” said Pasek. “And hopefully, this book is a conversation starter, and something that can break down the fear that people have about raising their hand and saying, hey, I feel this way too, and I can talk about it. Because you see it in these characters, and you see other people relating to it, and you see other people identifying with these themes. So for me and Justin alike, it’s really important to us that people feel empowered to shine a light on the dark places that they think they’re alone in and hiding, and realizing that there are so many other people who are huddled there, too. If we just admit it and talk about it, then we can rescue ourselves from staying in that dark place.”