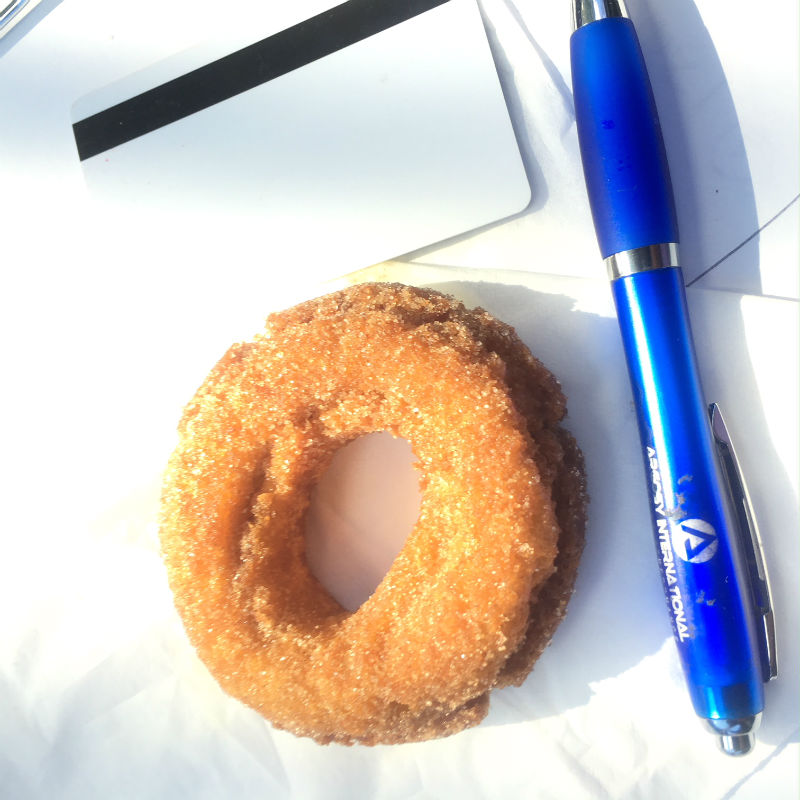 I was in Houghton Lake a few weeks ago with my guy when I turned to him and said, “We should do an apple cider crawl.” And then I trailed off.

I’m used to taking on weird projects alone or dragging along my son who depends on me for food and shelter and has little leverage to say no. I don’t usually involve other adults in my shenanigans. I wasn’t shut down immediately, so I continued, “We could visit the cider mills in Washtenaw County.”

He responded, “That would be more like a marathon.”

The following weekend, we decided to embrace fall by chasing apple cider.

When you put two middle managers together, there is little that unfolds without a plan, so we identified our targets: Dexter Cider Mill; Wiard’s Orchard, Cider Mill, and Pumpkin Farm; Wasem Fruit Farm; Jenny’s Farm Stand and Cider Mill; and Alber Orchard and Cider Mill. We wanted to end our trek close to where we’d land for the evening -- in this case, Ypsilanti -- so we plotted out our route in advance. We wanted our travels orderly.

Friday afternoon we picked my son up from school, planning to hit the road from there. He takes one look at us, “Did you plan that?” He’s looking at our clothes. Realizing that he is the only one not wearing a plaid shirt. He teases us, “Can we stop home so that I can change?” We don’t stop home. We head straight to I-94. 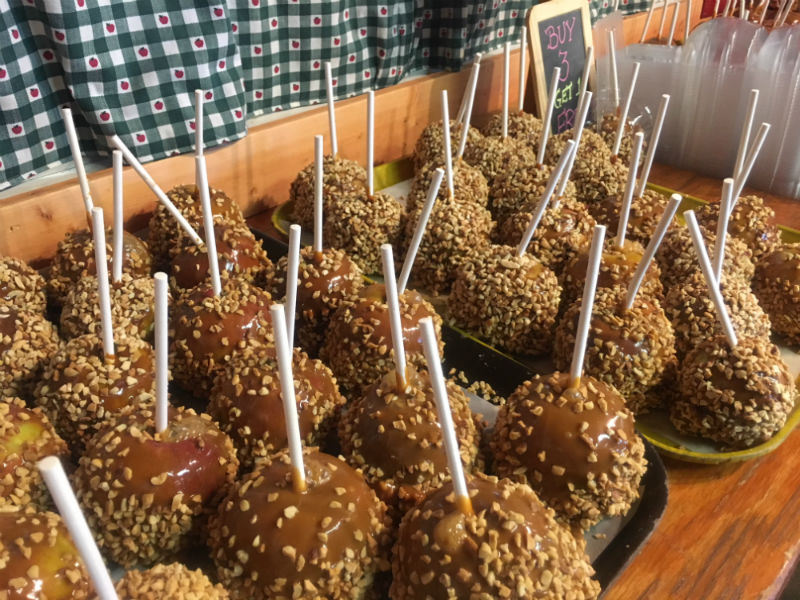 We arrived pretty close to closing time. There were plenty of cars in the parking lot, yet finding a parking spot posed no dilemma. As we approached the doors, I was reminded of something that I conveniently had forgotten: Where there are apples, there are going to be bees -- or are they yellow jackets? I’m never sure about these sorts of things.

Inside there were all sorts of apple-related sweets, old-timey candies, and things like honey and maple syrup -- the kinds of items a food stylist would put in the background of a fall baking recipe photo. We purchased a half-gallon of apple cider, two hard ciders for later, and a half dozen cinnamon sugar donuts. The business was set up in a way that helped the line move quickly, which is to be appreciated in a place that surely experiences rushes.

We made our way to a nearby picnic table to try our treats when we quickly discovered that we were interrupting a party among flying insects. When we saw such an idyllic, nearby table empty, we should have known something was up. We were too faint of heart to dine with these flying friends, so we went to plan B: the hatchback of my car. The cider was delicious and the donuts were great. And I impressed my companions by finishing my cup of cider despite the fact that a yellow jacket had flown into it after it decided the interior of my cup was a happening spot. The yellow jacket seemed quite unbothered.

My boyfriend and I arrived in Dexter in the early afternoon and Jenny’s Farm Stand was poppin’. Parking was hard to come by. As my boyfriend pulled my car into a tight spot, I was probably only 30 seconds away from whispering words of comfort to it: “Hey, car, sweetie, everything’s going to be OK.”

Jenny’s Farm Stand really packs it in. There were hay bales to play on, pumpkins to purchase, and animals to pet. There was a good amount of activity for a relatively modest footprint. To get to the donuts, you walked past fresh produce and lots of preserves. There was a line, but nothing you shouldn’t expect on a warm early autumn day. We decided that we were going to share a hot cider and order a half dozen pumpkin orders. We waited.

Nearby, a woman stepped up to the counter to pick up an order for eight dozen donuts. They’re for a wedding. Suddenly, we heard a distressed, “Oh my God. Oh my God.” I looked up. “These are so small. They’re not normal-sized donuts.” The woman stood at the counter staring down into one of the donut bags as everyone else seemed to wonder what was going to happen next. The line began to grow and you could hear people start to ask each other what was going on. She let a few more “Oh my God”s escape, and then finally purchased her donuts.

When we took possession of our own donut bag, I peeked inside wondering whether I was going to see donut holes. But, alas, they were regular cider donuts. I couldn’t pick up the pumpkin flavor, but in baked goods I seldom do. As we headed to the next stop, my boyfriend said, “I was wondering if these were going to be donut holes.” 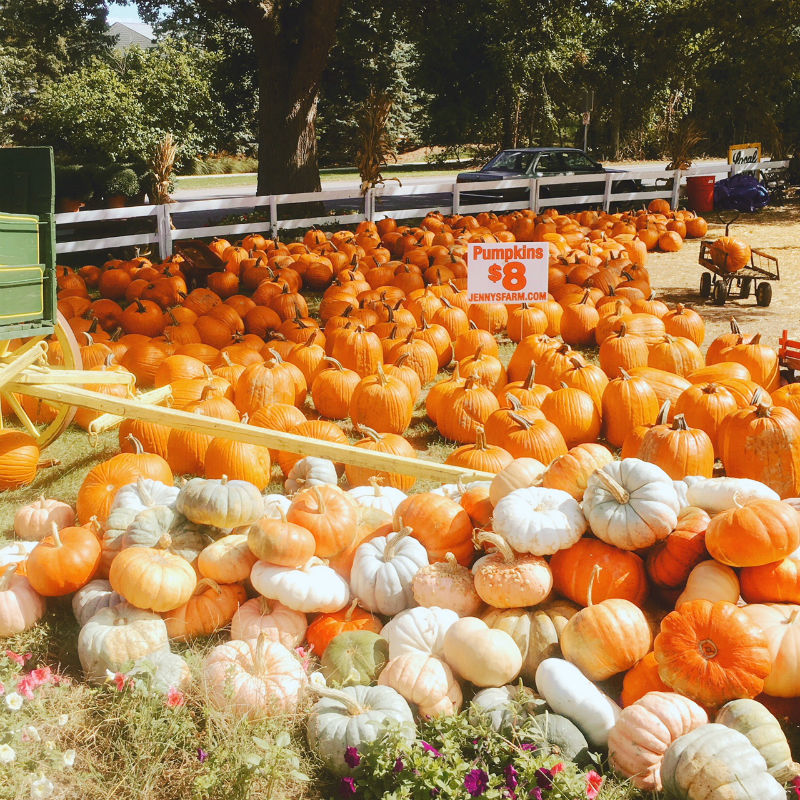 It was a fabulous day to drive to Manchester: rolling hills, pretty trees, and all that. Alber Orchard and Cider Mill was a lovely place to visit. This is the first place where we saw numerous apple trees as we pulled into a parking space. When we got out of the car, I couldn’t miss the mom spit-washing her small child’s face before snapping a photo of him in front of an apple tree. The building where the cider was sold was inviting. It smelled like fall. There was a station where one could taste the different variety of apples available from the orchard. As we walked in, we were offered samples of the cider: “This was pressed a few hours ago.”

They also offered a variety of activities such as hayrides, a play area for kids, and a corn maze. But despite this, it is totally possible to get in and get out of Alber Orchard without having these other possibilities thrown at you. Highlighting my inclination to visit historical sites and museums wherever I go, the vintage cider press seduced me. I looked at it, slick with apple juices, through a window and read all of the historical information about it.

Here, we went for an apple spice donut and left with a half gallon of cider. That’s right -- this cider was so delicious that with yesterday’s half gallon in the fridge, today’s cider in our bellies, and a couple more stops to go, we left with another half gallon.

Wiard’s Orchard is the type of place that you could make a day of.  After being guided to a parking space by attendants and then walking to the entrance, it took a few minutes to make sense of what they offer. There’s the Country Fair, which includes a variety of activities from giant slide to mini golf. At night they offer a “Chills & Thrills Park.” For people like us, we could walk past it all and visit the Cider Mill/Country store. That store had all sorts of things: pies, caramel apples, toys. I imagine that many wallets come out of there feeling used and abused.

We went for the apple cider slush. I was pleasantly surprised. I expected it to be OK, but it was quite good, refreshing even. We enjoyed our slush at one of the picnic tables and tried their donuts. Full disclosure, at this point in the day, I was losing my donut discernment.

“Now this place looks interesting.” --Him

We pulled up to Wasem Fruit Stand about an hour from their 6 pm closing time. There was a line out the door and around the corner.  It was a line for brave warriors. My interest was piqued, and if I decided to get myself together enough to dedicate a day to making applesauce and apple butter, maybe a dehydrated apple ring or two, this is the place I think that I’d come for the apples.

I overheard a man telling his daughters, “We should have come first thing in the morning.” They appeared to leave empty handed just as we would about five minutes later.

It was a little disappointing not to complete try their cider. It felt a bit like walking to the end of a half marathon when you had a good pace at the beginning of the race. Much like a road race, though, we tried and we didn’t get injured along the way. We’ll call that a win.

very nicely written. I wou ld love to do this, but my wheelchair confines me. However, I do remember going to some of the places you mentioned, especially at Dexter and the flying insects. We use to finally give in and eat donuts in the car while we watched other people -- and keep our windows shut so the bees wouldn't decide to attack us. Thanks for the good memories. Always wanted to visit Wasem's and Wiard's, but we never got there. Now, I feel like I've partially been there.

Please disregard my earlier comment. It was posted in error. I hope Jenny's is reformed and doing great. Their donuts really are amazing, and the place is so affordable! My kids have had great times there. I was just a little concerned about past safety issues. Hope they are in good shape now. Thanks :)

I want to head to Alber now…

I want to head to Alber now to taste cider and see the press! I spent Sunday at Blake's in Armada, and while apple picking was super fun, I was hoping to see how the cider was made. Thanks for the reviews.