Acts of Amore: "Love Has a Thousand Shapes" at A2 Art Center 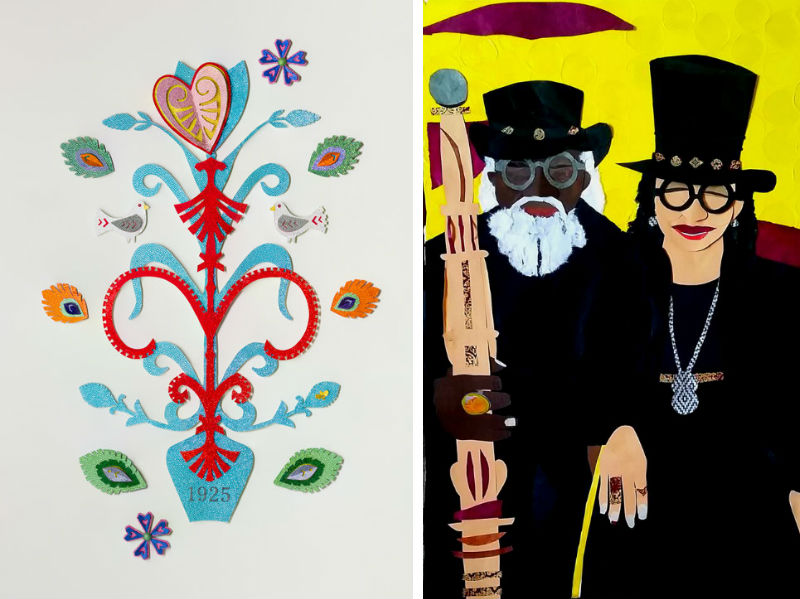 Left: J'aime Qui M'aime (I Love Who Loves Me) by Patrick Burton
Right: American Gothic: On the Black Hand Side by Judy Bowman

Love Has a Thousand Shapes is an intimate look at the works of five artists, curated by Andrew Thompson. In the exhibition announcement, the exhibition’s inspiration is cited as having come from Virginia Woolf’s character Lily Briscoe in To the Lighthouse. The name of the exhibition draws from the text itself, in which the phrase described her art-making was an act of love itself. The exhibition, a partnership between Literati Bookstore and the Ann Arbor Art Center, draws inspiration from literary allegories, the announcement also referencing Kurt Vonnegut’s Bluebeard in which a character creates “his final painting, a masterwork of love.” The work in the exhibit explores love “between lovers, friends, family, and with pets, places, and the past. The act of making artwork can be considered an act of love in and of itself.”

With the selection of only five artists, viewers are allowed a more in-depth look at a single artists’ work.

Patrick Burton’s paintings recall kitsch in their inclusion of glitter, sparkles, and embellishments. His works range in scale but employ decorative elements and abstract compositions. Almost all of the works have words or phrases near the bottom of the paintings. One small work, however, hangs above the door between the two gallery spaces, a pink heart with smaller, darker hearts in the center, titled Heart #3. This and another collage of smaller decorative pieces above the other doorway are devoid of text. Many of the works are created with the process of papier-mâché on wood. Perhaps the most ornate, yet subtle of his works included in the gallery is Toujours à Vous à Tout Jamais (Yours, Forever and Ever). The painting is made from acrylic paint, Swarovski crystals, papier-mache on wood. The piece is framed in a simple silver frame. Unlike many of his works, the piece is contained within borders. Other pieces, such as the small heart and his large collage J'aime Qui M'aime (I Love Who Loves Me), appear almost as decals attached to the wall rather than traditional paintings. Burton’s works may be the most eye-catching in the gallery, and his inclusion of Swarovski crystals seem to comment on the commodification of love.

Judy Bowman, a current participant in Art Prize, lives and works in Romulus. She was born in Detroit in 1952 and lived in the city for much of her life. Bowman’s pieces in the show illustrate her skill in creating mixed media collages. American Gothic: On the Black Hand Side, a portrait of two figures based on the iconic painting by Grant Wood, includes her signature layering of textures and patterns. Love Song, another intimate portrait and domestic scene, shows a couple sitting on a chair together. The woman’s gauzy dress protrudes from the surface, casting a shadow. The chair’s texture resembles leather, the lampshade casts shadows. This piece illustrates Bowman’s ability to integrate collage and “mixed media style” into her representations seamlessly. Adrienne Lesperance, a mixed media artist living and working in Detroit, has contributed a series of small paintings to the show. The works include an atmospheric underpainting or backdrop. In the foregrounds, black, heavy line work represents a human figure, and text accompanies the image. In Brother, for example, a line drawing in black paint represents a bearded man. Text painted over the figure in the bottom of the frame reads “brother I’m so glad you’re here, you’re you, and you’re mine.” Another painting represents a more detailed portrait. Titled Being Seen, in this work the subject’s skin tones are suggested more fully than in the previous work, the underpainting shifting into a green and black striped shirt. In this painting, the text is divided between the top and bottom of the right frame, and reads “thank you for seeing me/so clearly.” Lesperance’s painterly style combined with dynamic line work creates a unique series commenting on love and recognition by others. 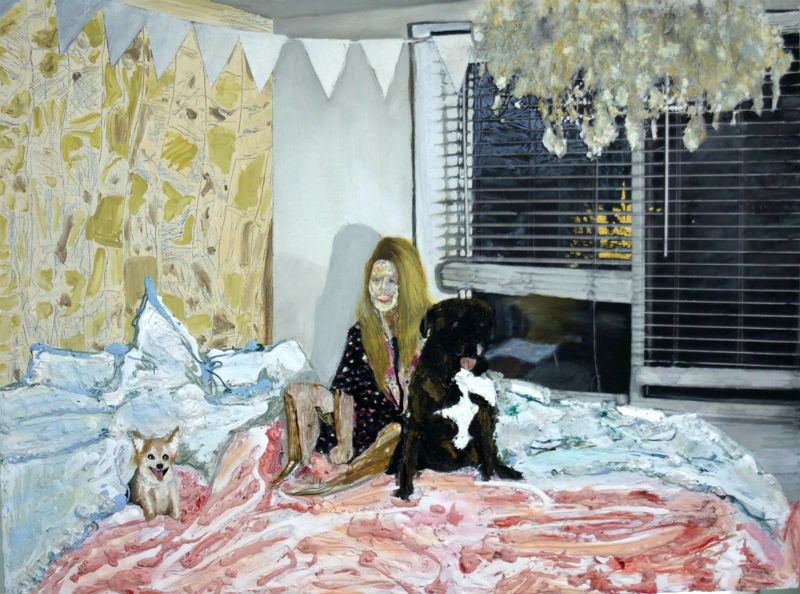 Nicollett and Rex and Lilli by Justin Marshall

Justin Marshall is an artist living and working in Detroit. Marshall’s large-scale canvases included in the show represent everyday scenes in domestic settings. His subjects are humans posed with their pets. In Nicollett and Rex and Lilli, the subject is a young woman on a messy bed, her two dogs sitting on either side of her. The paintings have impasto relief throughout the image, used in various places throughout the frame to increase the illusion of texture in the scene. Upon further inspection, the woman’s features are eerie and unclear. In another work, Jeff and Delorian, Marshall employs the impasto technique to a greater degree, creating stark contrasts and shadows in the indoor scene. In another work, Janine and Herman, the female figure, dressed in all black, stands with her black Labrador retriever. The texture in this work is implied through shape and pattern rather than the impasto technique evident in many of his other canvases. Scott Northrup has two works in the show. First, his video titled Hämeenkyrö Redux, a video in which the narrator reveals a love letter to Hämeenkyrö after his experiences there. The video is almost abstract in its inclusion of pop-culture clips paired with the narrator’s reading of the letter of longing. The video reflects his research interests, as revealed on the faculty profile where he works at College of Creative Studies: “modes of communication and new languages; storytelling, personal aesthetics, performance, and social practice in relation to identity formation; dead technologies and their connection to a digital world; the ephemeral/physical nature of experiencing longing, loss, and desire.” His other work, Alone, is a series of text in which the lines were clipped from an old book. Each line is a combination of words from various sources. The creation is published as a paper zine, which can be purchased in the gallery shop.

With the inclusion of such a variety of stylistic approaches and homages to love in different forms, this exhibition truly celebrates the intent behind the title Love Has a Thousand Shapes.

"Love Has a Thousand Shapes" is at A2 Art Center through October 27.