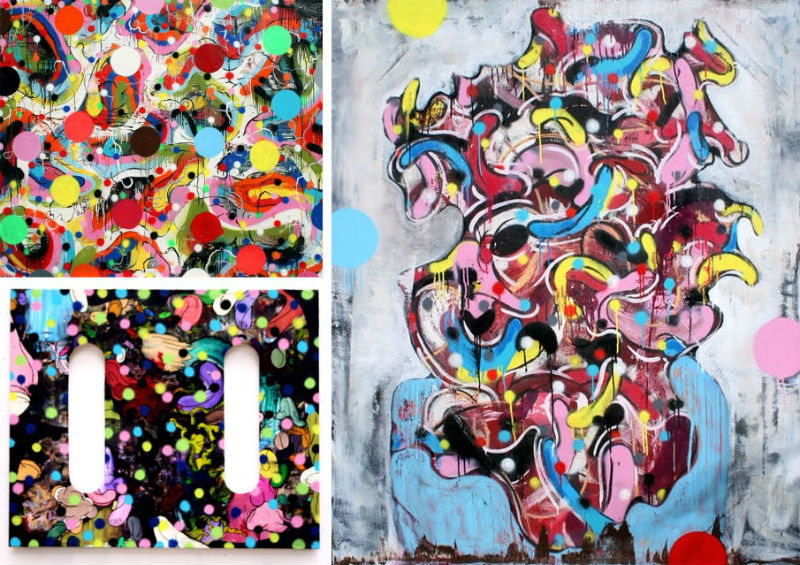 Dennis Jones’ Candyland at the University of Michigan North Campus Research Complex Rotunda is for those who like to have a little contact high to go along with their art.

A 2014-2018 14 masterwork concoction crafted by this adjunct faculty at Detroit’s College for Creative Studies, Candyland is a full-throttled exploration of post-painterly art whose graffiti-inspired abstraction is more than enough to push your glucose level beyond its prescribed limit.

It’s rare to find art as infectious as Candyland -- and even rarer to find the artist whose subjects work to such an insightful metacritique. For as Jones says of his work, “We’re incessantly bombarded with images and like some intoxicating sweet candy, they tempt, tease, distract, fill us up and pacify, if only for a moment.”

And he’s right. Candyland is vital in its infectious imagery and it’s sufficiently tempting, teasing, and distracting to pacify the most critical of viewers. But there’s also a subtle consistency of expertise that holds us in its thrall.

Jones holds his compositional scheme through a clever visual sleight-of-hand. Building increasing dense internal visual planes upon visual planes, Jones creates the illusion of depth solely through chromaticity and geometry. His visual signature is to overlay his pigments with such painterly density as to make his palette, well, yummy.

As Chewy Swirls shows us, there’s nothing left amiss and nothing accidental in his oversized, overwhelming, hyper-driven abstract painting. The 72”x84” acrylic, latex, spray paint, paint marker, and paint fragments on canvas work is the mark of a talented artist who's able to juggle his composition artlessly. For on a first approximation, the work might seem haphazard -- but this is only because it presents such a complexity to the eye and in this instance, seeing is definitely deceiving.

There’s a loose fluidity to Jones’ artificial pigments that bend his facture to maximum advantage. It’s as though the very artificiality of his materials is as much a commentary on his intent as the composition itself. While of the composition itself: There’s an internal push and pull to these pigments that effortlessly weave visual planes in and out of perspective until the work reflects a visual roller-coaster whose dynamic is all-encompassing.

Chewy Swirls is just what its title claims: Visually scrumptious eddies and twirls whose thicken impasto invites a conceptual consumption. As such, there’s no hidden agenda here -- this is seemingly Jones’ point. Rather, like the best of abstraction expression -- and what you get in Jones’ Candyland series is nothing less than enticing.

Super sweet! Thanks much,…

Super sweet! Thanks much, John.
D