Working Magic: "Beyond Words" A Celebration of Book Arts in 2018" at WSG Gallery 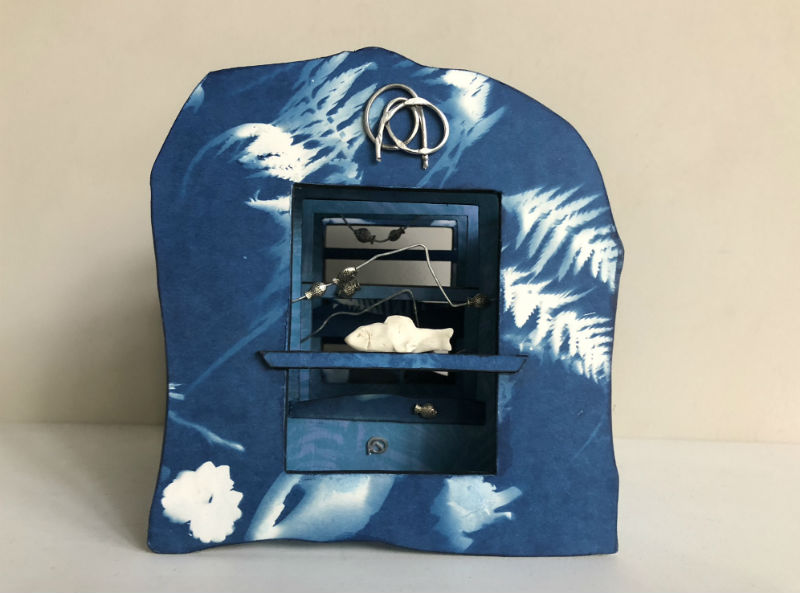 The cosmologist Carl Sagan once said, “A book is proof that humans are capable of working magic.” His comment admirably describes the lively spirit that animates Beyond Words: A Celebration of Book Arts in 2018 at WSG Gallery through November 24. The exhibit, curated by Ann Arbor artist Barbara Brown, continues an ongoing series -- this is its eighth iteration -- devoted to the art and craft of book-making by artists in the Great Lakes region.

Beyond Words is a noisy little show. The gallery’s atmosphere brings to mind a lively coffee shop filled with convivial patrons rather than the dusky silence of a library. These books have a lot to say, they are saying it out loud and no one is saying, “Shhhh!” There are tunnel books, books with video components, boxed scrolls, tiny suitcase books, books set to music. There’s even a book of poetry made of old tires. Brown says, “I feel like I’ve created an impromptu happening because the works have sound and light and movement.” 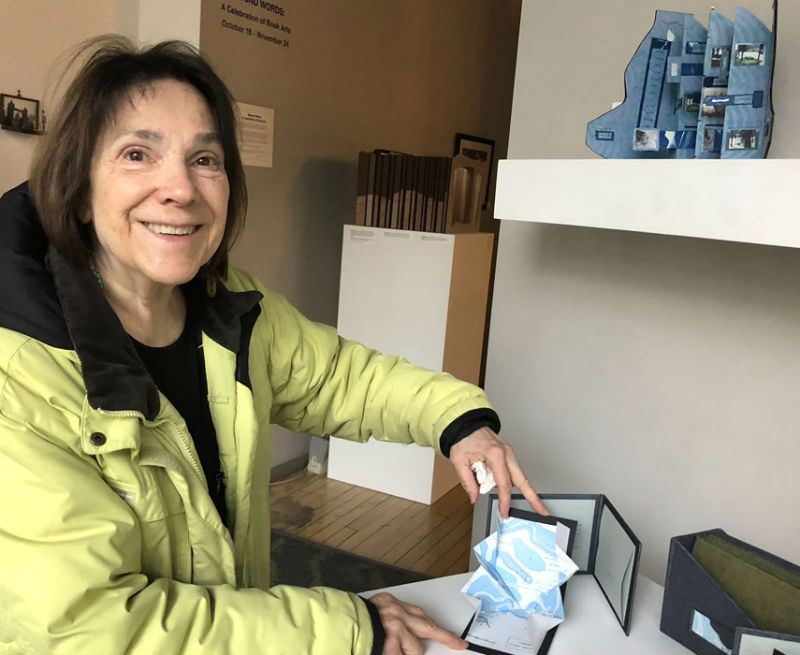 Field Notes From an Expedition, a collaborative artwork by Barbara Brown, Howard White, and anthropologist Maria Phillips, stands guard at the gallery entrance. This tunnel book is configured as a theatrical proscenium, and as you watch, a video tour of an archeological dig in Sudan unfolds within the frame. You descend the steps of the excavated crypt to find elaborate paintings of Egypt’s black pharaohs.

Travel is a recurring theme throughout Beyond Words. Next to the virtual tour of the Egyptian tomb lies a different journey: My Trip to London, a toy-like travelogue by prankster bookmaker Alvey Jones. A miniature suitcase hangs on the gallery wall, opened to reveal a small cutout figure of the artist himself, along with small movable representations of London’s buildings and landmarks.

Norma Penchansky-Glazer, already well known for her accomplished bronze figurative sculpture, has recently discovered an interest in book art. For this exhibit, she has created a number of intimately scaled and meticulously realized books in various formats that recall the natural beauty she encountered while traveling in Idaho.

Karen Klein’s small books offer a different kind of intimate travel: exploration of the natural world in her backyard. Carefully observed and lovingly rendered birds, insects, and leaves find their way into her mini-installation, Owl Anthology. 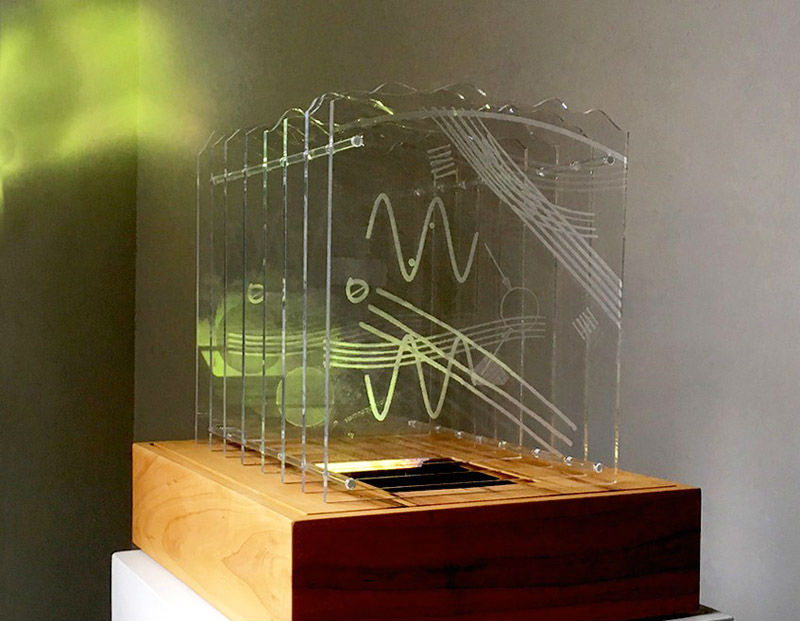 Humor abounds in Beyond Words. Sam and Ben Bertin’s “Viewer-Doodad” by Seesum™ creates puzzlement as it playfully invites questions about its origin, meaning, and purpose. The mysterious marks on its accordion-like pull-out acetate surface hint at, but ultimately withhold, a definitive answer to the mystery of its existence. Or as the brothers say in their statement, “Side effects include sweaty palms, mild puzzlement, unsatisfactory answers, swelling of the question glands …” Alvey Jones’ Betteagean Sea Scrolls is another visual inside joke -- the boxed scrolls are cut up crossword puzzle books that belonged to the mother of Ann Arbor writer Mary Morgan. Her name, Betty Jean, provides the humorous title of the piece. Equally hermetic and mysterious, though more serious in tone, are Ruth Bardenstein’s small suite of eight books that claim to map “psychological effects and perceptions.”

You hear 1+1=1 before you see it. Like several of the books in Beyond Words, it represents a collaboration between artists from different disciplines. Meghan Forbes, a scholar of Polish literature, has altered an old technical manual on transistor technology, adding paper and thread to each of the pages. Her partner in art, composer Ian McLellan Davis, has created a score that intuitively makes music inspired by Forbes’ notations in the book. The music plays softly on an old-fashioned cassette recorder, another form of obsolete machinery. The timelessness of music and art are contrasted here with the obsolescence of technology. 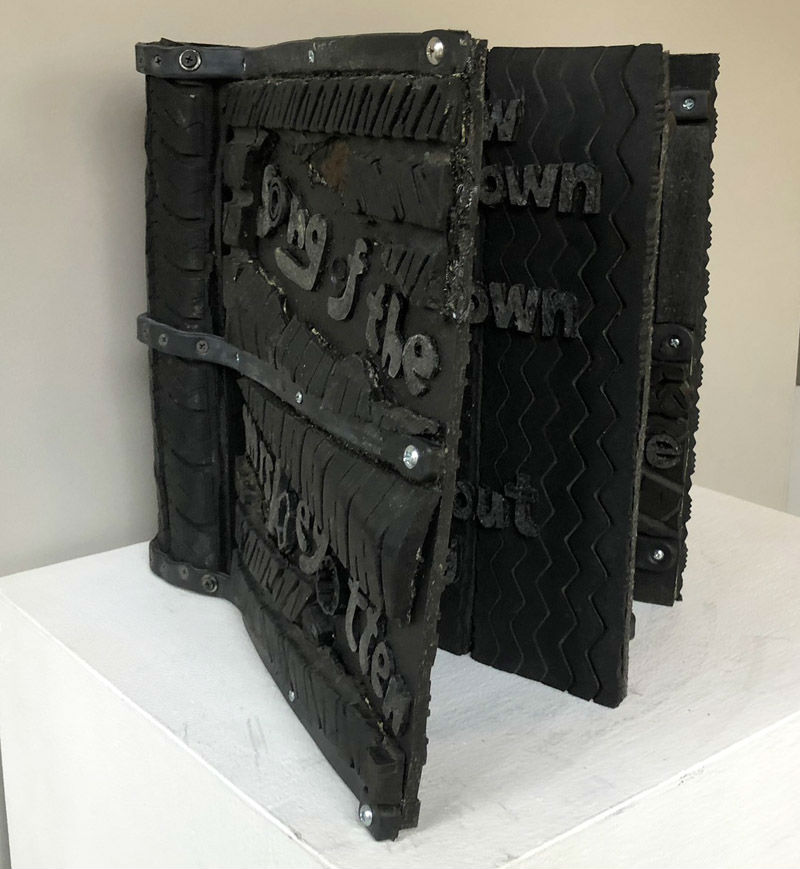 My personal favorite book in the exhibit is Song of the Misbegotten. Its creator, self-taught Detroit book artist Dick Cruger, is a poetic humorist with a serious streak.  His intentionally clunky book made of old tires amplifies the meaning of the poem written on its rubber pages.  It’s the perfect intersection of meaning and message:

Took the highway to hell
Landed in dullsville
It’s a cowtown
A jerk town
A town without pity
Think I’ll split this joint
take a michigan left
Look for a dead man’s curve
With my name on it.
Driving the wrong way down one-way streets
Lonely souls burned up jalopies and junk yards
I’ll find some blacktop 2 call my own
Name it spit street

Ann Arbor is a town of book lovers and this exhibit is destined to appeal to those who appreciate the mystery, humor, and knowledge contained in books in all their forms. Beyond Words demonstrates their continuing cultural relevance, both as physical objects and as carriers of meaning.

"Beyond Words: A Celebration of Book Arts in 2018," curated by Barbara Brown, is at WSG Gallery, 306 S. Main St., Ann Arbor. The exhibition runs through November 24. Visit wsg-art.com for more info.