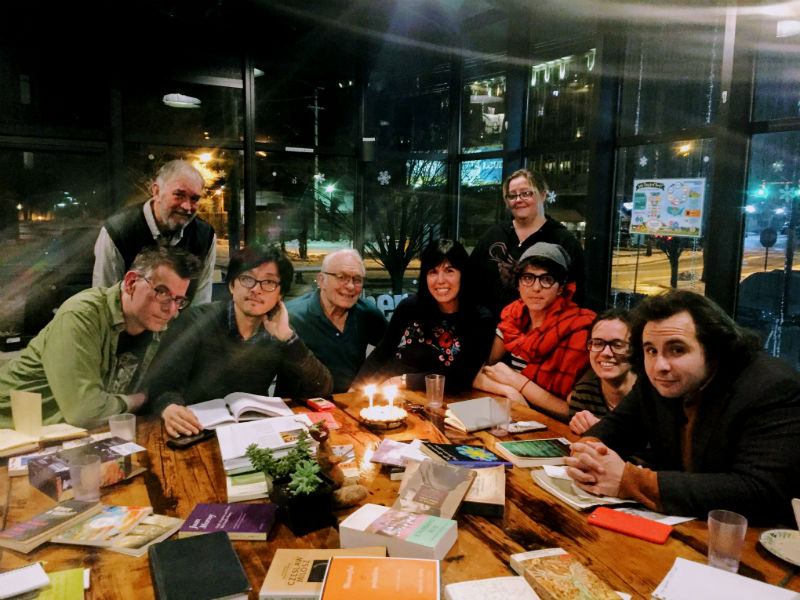 When attending the One Pause Poetry Salon, it struck me that its atmosphere is hard to come by. Part discussion, part reading, and part classroom, people attend to experience a community around poetry and to have an outlet in which to read and converse about poetry, a space that motivates and inspires.

The events, which are weekly from 8-10 pm on Wednesdays through December at Argus Farm Stop on Liberty, start with a free write for 12 minutes because, according to Mike Zhai who runs the Salon, 10 minutes seems too short and 15, too long. While classical music swells and night surrounds the market’s greenhouse, attendees diligently compose lines in their notebooks. A time to read and respond to the results of that writing session follows. Each person has the option to share or not and to chime into the conversation or not. This environment brings low stakes and high returns for people at any point in their journey with poetry.

“It’s fine for people to come and share their own poems or read their favorite poetry by others or just come and listen,” said Zhai. “It’s pretty informal in that way. I want to create this nexus between appreciation and creation.”

Some weeks, the evening includes a packet of themed poetry that the group reads together, ranging from Rainer Maria Rilke to the topic of spring. The Salon includes poetry from around the world, a variety of poets, and all traditions, genres, and forms.

“A lot of people are weirdly intimidated by poetry,” said Zhai. “I don’t understand it because I grew up loving poetry. … But it’s very vulnerable for people because poetry involves a lot of deep feelings.”

A writing game fills the second half of the Salon. Zhai plans an exercise, such as collaborative poem writing like Exquisite Corpse. During the Salon that I attended, the exercise consisted of composing poems using words and definitions on pages from language dictionaries. After engaging with the activity, the writers again received a chance to share their creations.

Zhai, winner of the 2017 Green House Poetry Prize, holds a degree in literature from the University of California, Berkeley and MFA from Mills College. His experience with a poetry salon that he participated in while living in Barcelona informs his leadership of the One Pause Poetry Salon. In Barcelona, he said, people from all walks of life attended the salon, shared this interest in poetry, and came at it from all angles. Three years ago, Zhai came to Ann Arbor to work on White Lotus Farms for a few months and stayed. He has worked at the University of Michigan, volunteers at White Lotus, and works at Argus Farm Stop.

The Salon kicked off in September 2016, several years after the start of the organization, One Pause Poetry in 2010. In conversations between Zhai and One Pause Poetry director Sarah Messer, the idea for the Salon sprung.

Outside of settings like university courses, readings, or open mike nights, the Salon’s structure and engagement with poetry feels relatively rare. In fact, the One Pause Poetry’s aim is to make poetry accessible to all.

“The mission is to break down barriers between different poetry camps or aesthetics,” Messer said.

While poetry appears at venues around town and the university, poetry can be hard for the community to access, noted Messer. The nonprofit organization One Pause Poetry launched around the time when some bookstores were closing in the Ann Arbor area.

One Pause Poetry launched as part of the arts collective Copper Colored Mountain Arts, which was modeled after Black Mountain College and Bauhaus and then became its own organization in 2012. The name stems from the Japanese poet Ikkyu, whose name means “once paused.” In addition to paying homage to a venerated Zen master, this name for the organization invokes the idea of stopping for a moment to listen, said Messer.

Messer has been interested in poetry since high school, and when pursuing ballet in college, had an influential teacher who helped her find the path to poetry, which she studied at Middlebury College. She earned her MFA in poetry at the University of Michigan and has received numerous poetry fellowships. She has written four books, Red House, Having Once Paused: Poems of Zen Master Ikkyu, Bandit Letters, and Dress Made of Mice. Prior to moving to Michigan to make cheese at White Lotus Farms, she taught at the University of North Carolina Wilmington for 15 years. Messer now teaches poetry at the Residential College and continues making cheese at the farm.

The Salon forms one of many offerings of One Pause Poetry, which is funded by grants and donations. One Pause hosts two poetry readings a year, both in September. Poets have included Gary Snyder and Ross Gay giving readings at White Lotus Farms. Readings have featured Latina voices and eco-poetry. Such readings help achieve the mission of making poetry available to the public.

“It brings a different crowd who comes for the farm and farmers market, and who wouldn’t normally go to a poetry event, but come because they love the farm,” said Messer.

A high school poetry contest and online audio archive are also among the One Pause Poetry events and resources.

About the Salon, Messer said, “I love that the Salon is a constant, and people can just come. You can just show up and don’t have to pay money.”

And writers often leave with good poems that they’ve written, said both Zhai and Messer.

The One Pause Poetry Salon is weekly from 8-10 pm on Wednesdays through December at 325 W. Liberty St., Ann Arbor. For more information, visit onepausepoetry.org or on Facebook.