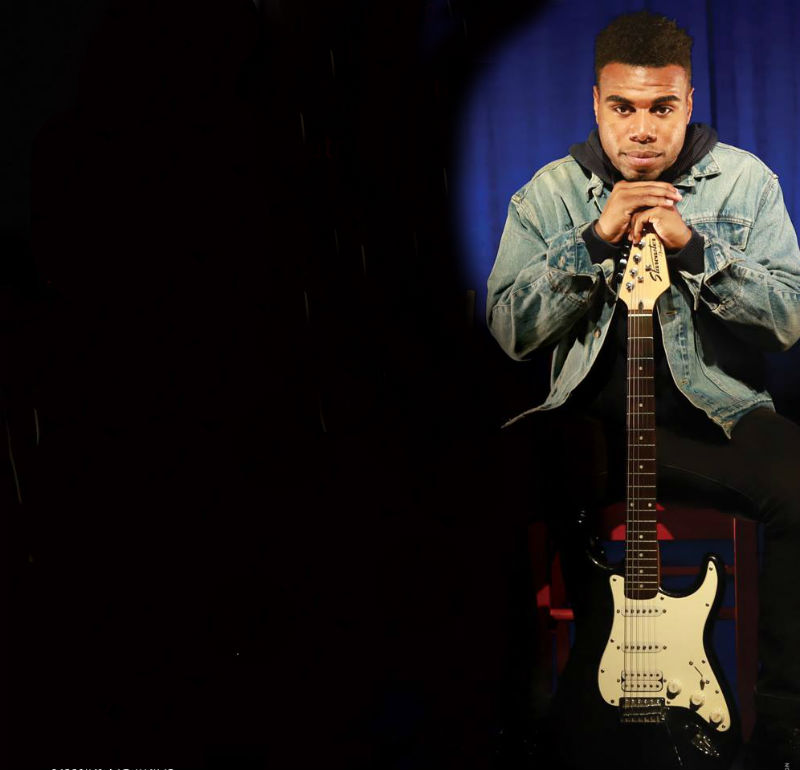 Justin Showell stars as the Narrator in U-M's take on the 2008 Tony Award-winning Passing Strange.

In the late 1970s, a young African-American with musical ambitions left his strict religious home in Los Angeles to set out on a journey to discover who he was, what he believed and where he belonged.

Years later, the rock songwriter and musician known as Stew turned his story of self-discovery into the unusual and critically acclaimed musical Passing Strange. The musical, with book and lyrics by Stew, and music by Stew and a former bandmate, Heidi Rodewald, received seven 2008 Tony Award nominations and Stew won the award for best book. Passing Strange also won the Drama Desk Award for outstanding musical.

His story resonated with those who lived during those years and it resonates still with young audiences, which makes it a perfect vehicle for young actors. The University of Michigan Department of Musical Theatre will present Passing Strange Nov. 15-18 at the Arthur Miller Theatre.

“This is a real important piece because of the story that Stew tells of being an African-American growing up in Southern California in the late '70s and I think the story is a relevant one that speaks to the diversity of our student population and our theater students,” said Jason DeBord, the production’s musical director. “And on top of that, it has the most slamming rock 'n' roll score in the last 20 years. It is a constant kick.”

The story is set in three distinct places. A young man, called Youth, discovers his love of music in his mother’s church, but he also finds the community and home atmosphere oppressive. He travels to swinging Amsterdam and revolutionary Berlin, which both challenge his worldviews.

Director Tiffany Rachelle Stewart said the challenge for directing the play “is the mass and magnitude of the three locations that the youth travels to on his journey.”

The Narrator -- originally played by Stew, who is now an older version of Youth looking back on those days -- tells the story, along with the cast, through acting, dance, and the vibrant rock score.

Stewart is a professional actress, director, and choreographer in New York City and an adjunct professor of Movement and Acting at New York University’s Tisch New Studio on Broadway. Directing and teaching come together in her work with the U-M cast.

She said the church community was a “rich, vibrant environment” and Youth learned to love the music but felt constrained by the church and his mother’s home.

“We did everything we could with the 17 actors and creatively to capture L.A. and his environment,” Stewart said. “What was inside of them. That was the challenge for me and the company to get at that, the molecules in the air, the feeling on the skin when we land in the middle of this church in L.A. that felt very judgmental, felt like it was telling him to be a certain person. It was a representation of the kind of home life that he felt he couldn’t live with.”

In Amsterdam, the Youth finds a very different world.

“When he finally puts his bag on his shoulders and says ‘I’m out of here,’ what does it mean to land where for the first time you experience a radical chance at freedom,” Stewart said.

But freedom leaves the Youth with “not enough form, not enough resistance, there is nothing for him to push against and as an artist. He realizes, 'Oh god, I don’t want to go there either.' He wanted paradise and then what does it mean to be a survivor in paradise,” Stewart said.

“When he gets to Amsterdam, it’s messy,” she said.

In Berlin, revolution is in the air.

Stewart challenged students to get inside the ideas and feelings of that politically charged time in creating their characters.

“I wanted them to have a really radical experience of being inside the creative process,” she said. “So I wasn’t interested in coming in with a slate of ideas that are very firm and saying here’s the choreography, here’s the characters, I didn’t want to do that.”

In the Berlin scene, actors are challenged to understand the political drives that lead to rioting on May Day.

“What do you know about the movement that is happening right now that would make you stand firm and hold your voice and hold your body and shout to the rooftops this has got to change,” Stewart said.

Stewart said she worked with the students through “vigorous exercises” to create the emotional worlds of their characters.

Characters are also defined by music. The music in Passing Strange encompasses a large range of sounds and styles.

“The music as presented almost sounds like Burt Bacharach filtered through David Bowie and the Sex Pistols,” said Jason DeBord. “It’s incredibly complex. It’s rock 'n' roll, but it’s a lot more than that. It goes into minimalism; at points, there’s a lot of repeated rhythm patterns and melodic patterns that repeat over and over and over again.”

“There’s one section that I call the psalm because it is chanted like a psalm. It goes between that and straight-up rock,” DeBord said. “What it does not do is sound like commercial theater music except in one very funny moment where it kind of winks at it. Otherwise, it is Stew’s and Heidi Rodewald’s unique take on American pop.”

DeBord will be leading a rock band on stage. DeBord and student Isabel Stein will play keyboards, student Eliza Salem will be on drums, Ann Arbor professional musicians Alex Anest and Tim Flood will round out the band on electric guitar and electric bass.

Justin Showell plays the Narrator, originally played by Stew off and on Broadway.

“He’s marvelous,” said Stewart. ”It’s a very large role. The role is essentially someone who is far along the journey pausing to look back and the look back in the play, so there is a real nuance of moments.”

The cast recreates the moments that trouble the Narrator’s memories of his struggles at home, in freewheeling Amsterdam and in politically charged Berlin.

DeBord said he takes away something different every time he hears the music. He said he wants the audience to experience the same depth of emotion he’s experienced. He said the play deals with the importance of human relationships and making a connection.

“That’s the number one central message of the show and it hits me like a freight train every time,” he said.

Stewart said she hopes the show also brings out the wonderful and magical of live theater.

“That live theater gives us a chance to be a little messier, a little braver, to take more risks, to have more complicated conversations,” she said.

In her director’s note, Stewart writes of the restlessness that all people feel.

“The feeling that creeps up inside of you when you want something different than what you have or where you are. It’s an inner scratching that begins in many of us during our upbringing when we first start to be curious about our own identity. In this moment we often look around at some aspect of our family, our town, or the ideas painted on us by others, and begin to hear an intrinsic voice calling for something more. Something else. Something that feels more you.”

Passing Strange is about that journey to something else.