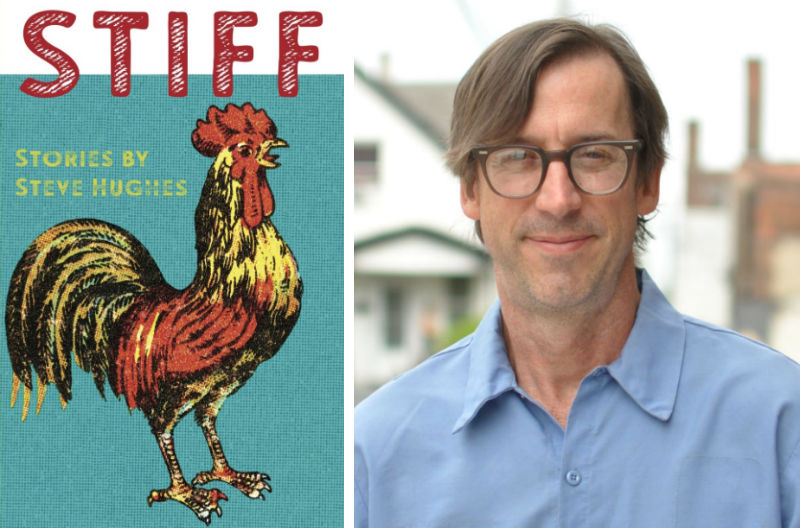 Longtime Hamtramck resident Steve Hughes is a force of nature in his hometown. For over half a decade, Hughes curated the Hamtramck Neighborhood Arts’ Festival where artists opened up the studios in their homes and attendees went on an “art crawl.” Hughes is also a founding member of Public Pool, an art cooperative that formed in 2010 with the goal of creating and supporting a wide range of art experiences. A year later, Hughes then decided that a literary component of the visual arts events was needed and so he created the Good Tyme Writers Buffet.

The literary series began with a dozen authors reading for about 10 minutes; it has since cut the number of readers and added a DJ. Hughes received a grant through the Knight Foundation and shaped the project into what it is today: a space for audiences to enjoy an evening of reading based on a theme. “We get people from the neighborhood, friends of the authors, readers," Hughes says. "A good mix of people who come out on a Saturday to hear the readers, listen to music, eat and drink.”

The readings are connected to the visual arts show in the space. “This month the show is called Bread and Clutter,” Hughes says. “So our six authors will read about food.”

For each event, Hughes writes a short story that connects to the theme. “I give myself an assignment every month,” he says. “And the only constraint is that it has to be read within a 10-15 minute time frame.”

This series and these stories led to the book, Stiff.

“Since I’m writing fiction and the reader knows it’s fiction, I sometimes spin off into the surreal,” Hughes says. “For example, the first story in the book is about a married guy having an affair. After I wrote it I thought, ‘I can make this better’ and so I gave him a pumpkin head. That changed the whole thing; now his girlfriend wants to carve his face and she carves it wrong. ... Another story is based on a Writers’ Buffet where the theme was ‘mumbo jumbo.' I found an image of a palolo worm, which cuts itself in half a couple of times a year and sends its genitals off to party with the genitals of other palolo worms. The rest of the worm stays behind and doesn’t get to attend. The image ended up on the cover of the flyer for the Buffet and I ended up writing the story 'Ripening,' about a guy in Hamtramck whose genitals go off to party without him.”

Not surprisingly, Hughes adds, “I had a lot of fun writing these stories.”

And luckily, Hughes stories are easy to find. He holds the honor of writing Detroit’s longest running zine, Stupor, which he began in 1995 while still living in New Orleans. A few issues later, he moved to Hamtramck and has produced the zine there ever since. Hughes describes it as “stories I collect from people I meet at bars.” After finding the artist, “I record the person, learn about him or her, then study the footage of what I taped. I use that transcript as the rough draft for the stories that I write and then distill down what I want to focus on to keep the writings short.” From there Hughes gives the work to his artist who does the layout before the zine goes to Standard Printing in Ypsilanti. “From there it goes to Planet Ant where a Hamtramck artist will create a performance of monologues from the issue. ... So it’s a full circle of local creativity.”

The ultimate focus of much of Hughes’ work is the idea of “home,” something Hughes created for himself in Hamtramck when he moved there. “Everyone is trying to connect in some way with other people," he says, "be it with a partner or friend as they try to find a spot in the world where they can be and exist and be comfortable. ... I think it’s that struggle of moving toward home that’s the overarching theme of the book, and it’s really expressed through desire -- desire to be with another person, be that sexual or physical or whatever.”

For Hughes, home is “really about the people. Your home is not necessarily a spot where you are at, it’s not just the house, but the people who surround you that make it your home. It took a while to feel like, OK, I have a community, but it started with the zine then continued by working with artists, which brought in greater connections and I connected with more people and now with [Good Tyme Writers’ Buffet] I can create a community of writers. ... When you’re in school, you have a community … you’re kind of stuck with people in classes and groups. I had that in grad school in New Orleans and then I moved up here and missed that feeling. It took a while to feel like I fit in, built a festival, built a community around myself, and I feel good here. I love it.”

Hughes appears at Nicola’s Bookstore on November 28 at 7 pm. The next Good Tyme Writers’ Buffet is on December 15 at 7 pm at Public Pool at 3309 Caniff in Hamtramck. Visit stevehugheswriter.com and stuporzine.com for more info.