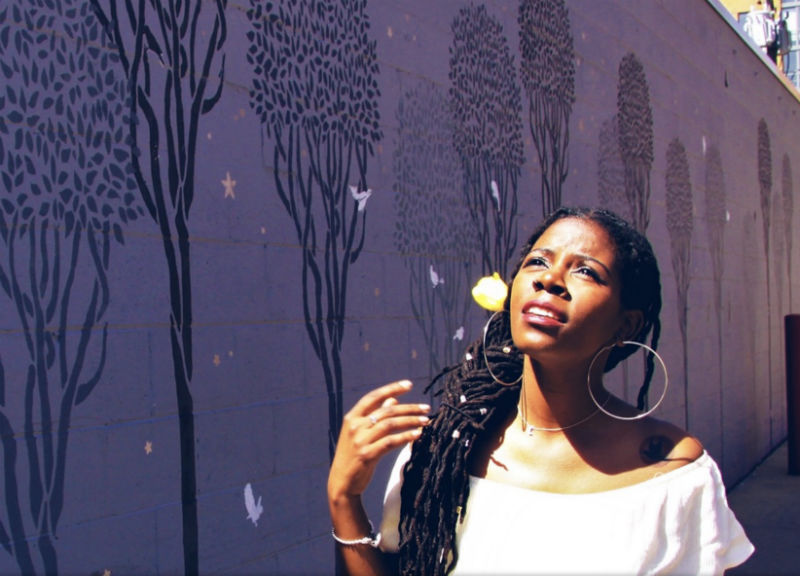 But when Davis isn't overseeing people getting their hair done, she's crafting songs as Dani Darling. The artist formerly known as Soulgalaxygirl just released "2:22," her first single and accompanying video under the new sobriquet, and it's a woozy slice of off-kilter R&B. The video features Darling lounging around her place, swiping her way through a bunch of Tinder profiles in search of a soul mate, but the tune itself is more of a true love song.

When Darling performs live, it's in a two guitar, bass, and drums lineup, and her music continues to evolve week by week and won't necessarily sound all that much like "2:22" in the future. But the multifaceted Ann Arborite with strong pipes can light up whatever kinds of songs she sings.

We talked to Darling about "2:22" and future plans with her band.

Q: Why did you decide to change your name and start over?
A: As Soulgalaxygirl I was trying to find a place in the R&B and hip-hop realm. I realized that my songwriting and style was definitely indie-soul and jazz. So I shifted my focus from working with producers to fleshing out my acoustic compositions instead. I decided to just start performing those songs and the rest fell into place. I actually have a few projects from that phase, not sure if they'll ever come out of the vault, we'll see.

Q: What's the origin of the song "2:22" and what does the title refer to?
A: It's about fate and hoping you're on the right path. Especially when something is going well, or you meet a special person and it feels meaningful so you look for signs. In this case, I kept seeing 2:22 on the clocks and decided to write about it, it became a love letter of sorts. With the video, I wanted to shift the focus and explore modern relationships. Working with KaiCy we came up with a pretty cool concept and I'm very proud. We'll be showing it at the A2 Tech Film Festival in January.

Q: You're a guitar player and you often perform live with a full band, but "2:22" is an electronic / studio production. How did you end up going in that direction for the song?
A: Before we formed the band I was working pretty closely with The Black Opera on artist development and my friend OBE from Australia just sent me some really cool tunes and asked if I had any ideas. I sat down and wrote "2:22" that afternoon. I don't even think he had intended on giving me the record but it just happened that way! The project will be quite a bit different but equally whimsical.

Q: Is there rest of the EP in a similar vein and when does it come out?
A: You know, I'm not sure. Next year for certain but my sound has evolved so much since teaming up with Noor (bass), Chris (drums), and Joel (guitar) that I want this project to reflect that. We are about to enter our "studio phase" so it's very exciting. Stay tuned!

Dani Darling plays the Freighthouse Holiday Festival on Saturday, December 1, and the Electric.Soul.Show on Friday, December 7 at Ziggy's. Both venues are in Ypsilanti. Visit soulgalaxygirl.com or her Facebook page for more info.