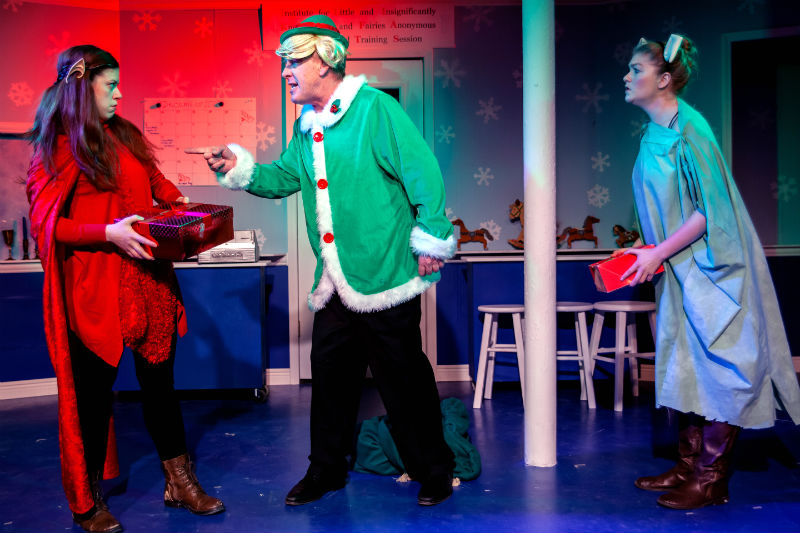 Sarah B. Stevens, Dan Morrison, and Elizabeth Jaffe in The Elves and the Schumachers by Carla Milarch and R MacKenzie Lewis at Theatre NOVA. Photography by Golden Record Media Company.

In England, the panto (short for pantomime) is a Yuletide tradition. A familiar fairy tale is retold as an excuse for a light-hearted vaudeville of jokes, well-worn comic routines, and song and dance.

The plot of Carla Milarch and R. MacKenzie Lewis’ retelling keeps to the basics: elves help a desperate shopkeeper and save the day. But, oy vey, do they wander far and wide into the surreal and the totally silly.

Milarch directs the show and Lewis is the music director. Milarch lets her actors run free in a show that begins slowly and then picks up speed as it rolls along. The jokes are hit and miss but there are more than enough good humor and well-staged slapstick to please an audience. Milarch and Lewis have added new lyrics to parody versions of several pop and show tunes (one to especially good effect).

The three adult cast members take several roles and all get to sing, dance, joke, mug, and giggle their way through a pleasant, if uneven, 90 minutes of fun.

The show is designed as a children’s melodrama, with the kids in the audience (and adults with a childlike spirit) encouraged to cheer the heroes, boo the villains, help the elves, and sabotage the bad guys. But this is a child’s show with some mildly risqué asides to the adults and some broad goofiness. Audience members are also invited on stage to participate (so you’ve been forewarned).

Dan Morrison in his many roles also acts as an odd master of ceremonies for the evening. His Blue Fairy is a loud, innuendo-filled drag act. He/she cavorts and throws off Borscht Belt jokes and insults with abandon, playing coy and seductive to the young men in the audience. Also, in that same tradition, he laughs and makes high humor of forgetting his lines. He also plays the frustrated coach to two insignificant elves, an Indiana mayor (with a western accent?) and several other broad characters.

Elizabeth Jaffe plays Bobby, the insignificant brother of Dobby of Harry Potter fame. She’s a poor waif in search of a place to be a house elf. Jaffe is the more innocent of the two elves and less adventurous. She gets to sing some sweet and hopeful songs.  She is especially funny in her elfish use of the Dobby-style third person and her dithering insecurity.

Sarah B. Stevens is the other elf, Elmo, a less significant Tolkien elf. Stevens brings the show to life with a hilarious rendition of “My Top”. The elves have been working on making toys when Elmo is told his top isn’t good enough (unknown to Elmo, he’s made a dreidel, the Jewish toy associated with Hanukkah). The music is “My Shot” from Hamilton and Stevens brings some dynamic rap energy to her rendition of the over the top “Top” lyrics. Stevens is a gifted comic actress and here she gets to mug, romp, karate kick and style dance to abandon. And then, she gets to shift gears to play Mrs. Schumacher, owner of the Oy Toy store, raising her young son and trying to prepare for Hanukkah and avoid eviction by a greedy landlord and a Minotaur (don’t ask). Stevens shifts easily from the hectic Elmo to the calm mom. Her character also gets to explain the importance of Hanukkah in a respectful way. But it’s the manic Stevens that lights up the show.

William Powers, a fifth-grader at Haisley Elementary, is funny as the young Judah who works with the elves to help his mom by creating a run on Elmo’s dreidels.

But forget the plot. Pantos are not about plots; they’re about shtick and this show has lots of it and some of it sticks and some of it doesn’t. Several of the song parodies hit home, in addition to "My Top," parodies of Camelot and Rawhide are funny and allow for some giddy choreography by Jennifer Felts.

Forrest Hejkal’s set of the toy store seems modeled on several TV kid shows, which is perfect for this show. The look is more Pee Wee Herman than Sesame Street. And this is just right for a Pee Wee Herman kind of show.