96th All Media Exhibition at the Ann Arbor Art Center 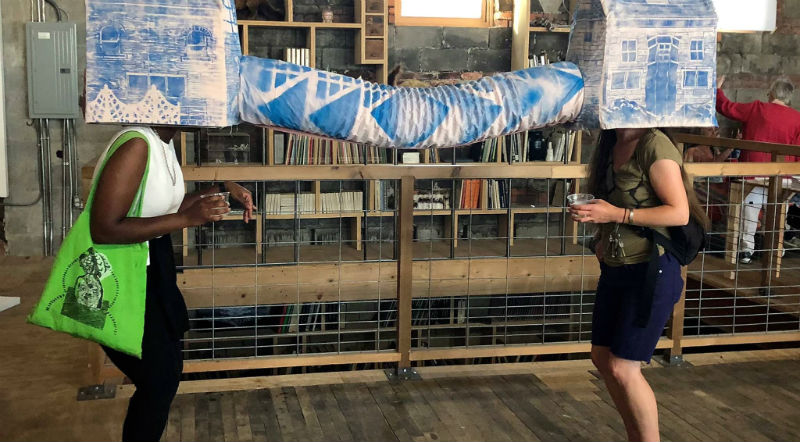 Sarah Rose Sharp is an accomplished artist in many areas: she writes about art and culture, lectures at a half dozen colleges and universities, shows her own work in places like New York, Seattle, and the Detroit Institute of Arts, and most recently she curated the 96th All Media Exhibition at the Ann Arbor Art Center.

“This was an open call, so artists submit their work and my job as the juror is to choose which work gets into the show,” Sharp explains. “We received around 700 submissions, which were then culled down to 45. … A very challenging undertaking!”

Sharp points out that “the process requires a lot of discernment, which I want to emphasize because people often feel bad when their work doesn’t get chosen and it is absolutely not a reflection of work not being good but rather a reflection on the limitations of space.”

The process begins with an open mind looking for a common thread. “As I go through the art, I start to see things that intuitively feel like good choices or that attract me," Sharps says. "Then I take a look back and will see a theme emerge. In this case, it was the idea of everyday altars such as with two sets of photographs submitted by two different artists. One is a series of object portraits inside a hardware store and the other is people posing next to their own collections of things. … There is a little girl dressed as a fairy standing by her collection of fairy figurines, a man displaying an altar for Día de Muertos. The objects take on this mythic signification as we put them together in ways that are meaningful for ourselves. I saw these (photographs), looked back at other pieces I had selected and found that there was a common theme of artists transfiguring things from the everyday into something significant and sometimes personal mythology.”

Artists from all over the country are included in the exhibit, including many from Michigan. Eana Agopian is from Kalamazoo and uses mixed media to create her collages that illustrate “visually that which cannot be explained through written language or science.” Photographer Domenique Annoni from Belleville focuses on themes of life or death, aspiring to show the “impact of drugs and alcohol taking over … society." Ann Arbor resident Jennifer Belair Sakarian, a mixed media visual artist, employs watercolor paints, embossment foil, and trace monotypes in one of her pieces titled #I GREW FROM THE GROUND UP#. Northville artist Taiki Fujimori’s glazed stoneware jugs draw inspiration from late 19th-century work as well as work from the Temperance Movement when “snake jugs were an embodiment of … prohibitionist sentiment.” Sue Hale of South Haven works with felt to create “organic, three-dimensional objects” and says that felt making is “an alchemy for me.”

During a juror reception in mid-November, Sharp awarded the cash prizes and honorable mentions for the top pieces: “This was really intense! I already liked all of these pieces so very much and then had to select medalists on top of that!”

A show is “like making a collage in that you start pulling together material that feels right to you and later on you realize, ‘Oh, I pulled all pictures of dogs’ or whatever the theme happens to be. Let your subconscious mind do the first round of work,” Sharp says. “A show is only as good as the work submitted and so I hesitate to take too much of the credit. People entered outstanding work and it was an honor to work with these artists.”

The 96th All Media Exhibition is at the Ann Arbor Art Center Nov. 2 to Dec. 1.