Beyond 8 Mile: The "History and Future of Detroit Hip-Hop" at U-M 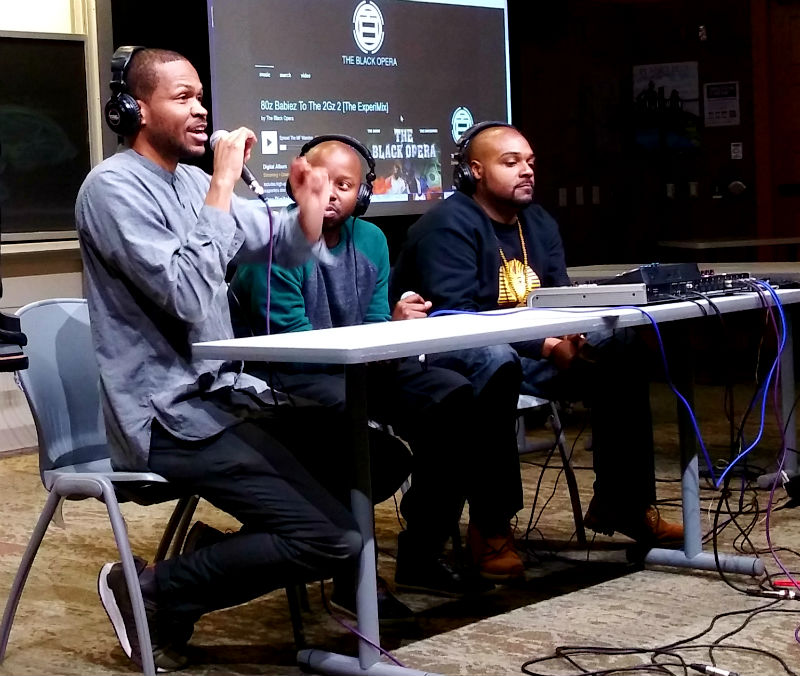 No cyphers broke out during the making of this panel: Sterling Toles, Jamall Bufford, and Khary Frazier talk the history of Motor City hip-hop.

In June 1990, newly freed political prisoner Nelson Mandela made his way to the United States and eventually to Detroit. Mandela toured the Ford Rouge Plant and UAW President Owen Bieber made him an honorary lifetime member of the union -- experiences and honors that are uniquely Detroit. Mandela’s visit culminated in him addressing a standing room only crowd at Tiger Stadium. But before Mandela spoke, two local rappers, Kaos and Mystro, took the stage and performed in front of the 49,000 people in attendance.

For many in Detroit’s hip-hop community, including Khary Frazier, this was a seminal moment in the development of the D’s niche hip-hop scene.

It was stories like this that dotted the December 4 conversation between Khary Frazier, Jamall Bufford, and Sterling Toles on the U of M campus. The three gathered this past Tuesday in the Dana Building to discuss the "History and Future of Detroit Hip Hop" -- a scene that all the panel participants have had a hand in shaping.

Frazier, also known as WAE, is a hip-hop artist and entrepreneur who runs detroitisdifferent.com and manages his Creative Differences Marketing firm. Bufford, who hails from Ann Arbor, is a musician and artist, and Toles, despite making music for well over 25 years and earning a fellowship from the Kresge Foundation, simply introduced himself as a “dot-connector.”

These three gentlemen were well-prepared and well-qualified to deliver on the topic of Detroit’s hip-hop scene and I soon found them to be connecting the dots for me. From describing the boutique culture of early rap -- Toles said wanting to be a rapper was akin to wanting to join the circus -- to explaining the interconnectedness of Motown, funk, techno, and hip-hop, the presenters painted a vivid historical picture.

Frazier talked first about different gathering places central to Detroit’s rap history and the characterization of fans as "cheap" bar patrons, which is easy to be labeled if you’re only there for the music and not the booze. The fact that hip-hop was so far underground meant that if you wanted to hear it, you had to hear it live, and who wants a pint of Bud Light interfering with your memory of seeing Slum Village or D12 for the first, or the 50th, time?

The panelists introduced the audience to the Hip Hop Shop, Hamtramck’s Lush Lounge, Alvin’s, and The Shelter as places where those in the scene could initiate and watch cyphers, battle other rappers, and see some of Detroit’s finest hip-hop acts perform.

To help the relatively young audience place themselves in the infancy of Motor City hip-hop, the panelists reiterated the fact that most artists performing on stage or exhibiting their skills through cyphers and street rap had never recorded their music. In an age where hip-hop is the most popular genre of music and artists can publish their music on the internet, having to rely on traded cassette tapes or live performances to hear your favorite music seems antiquated.

Toles, Bufford, and Frazier then offered their take on what it was that shaped the sound of Detroit hip-hop. According to Toles, Parliament-Funkadelic became the foundation for the Detroit sound in a lot of ways -- from producing records that were sampled over and over again, to highlighting Detroit musicians who would go on to be studio musicians for record labels all over the country. Interestingly enough, it is Detroit’s economic and social history that allowed its black music scene to flourish. The fact that Detroit had a large black middle class that could afford instruments is paramount to Detroit’s sonic legacy.

Other shapers of the Detroit sound were early Detroit rap groups -- including Street Lords, Eastside Chedda Boyz, Goon Sqwad, and Rock Bottom -- who provided a roadmap for those who would follow. J Dilla, the producing prodigy, introduced the funk, soul, and swing into his beats and influenced others on the scene. Frazier noted that T Money Green, the Grammy-winning bass player from California’s Death Row Records, repeatedly used Detroit musicians to sculpt and build sounds for other groups outside of Michigan, thereby spreading Detroit’s musical sound to the rest of the country. As Toles put it, “You see Detroit in everything one way or another.”

The entire panel discussion can be heard below or downloaded as an MP3:

Toby Zurenko is a library technician.

For more information on legacy of Motor City rap, check out the documentary "The Untold Story of Detroit Hip-Hop" and the Metro Times article "An instant lesson in the history of Detroit hip-hop."

Still searching for International Flight Tickets Booking?
The Online Flight Tickets Booking services are one of the best flight booking needs that will surely make you feel charmed experience when you will book up your tickets with www.edreamsflight.com .
For more information just get in touch with our flight booking service number +1-888 228-3945

flight tickets online at www.edreamsflight.com and browser wide-range of services on our airline services. Just compare up prices and choose what is perfect for your bill. You can also set preferences to look up at flight booking prices directly booked up to connected ticketing services. For more information just dial up our International Flight Tickets Booking +1-855-970-9215