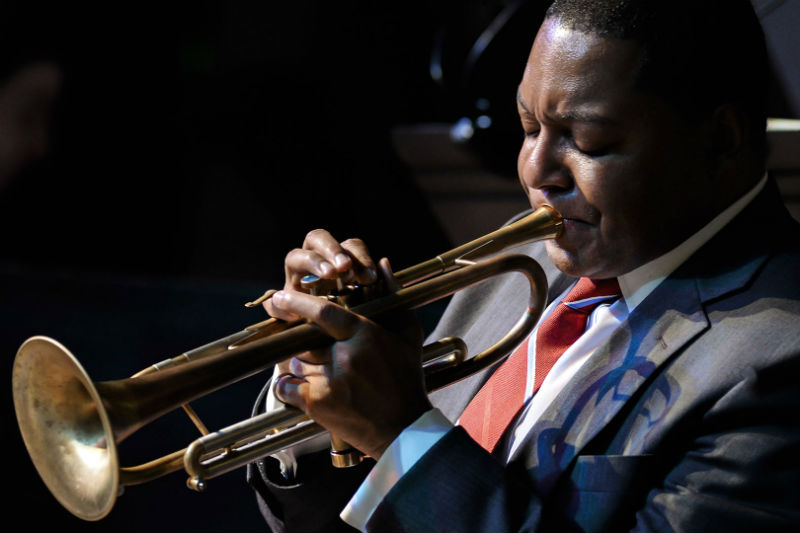 On November 28, veteran jazz trumpeter Wynton Marsalis brought the warm winter spirit to Ann Arbor's Hill Auditorium, courtesy of UMS. Marsalis came along with the delightful Jazz at Lincoln Center Orchestra and they played tunes of the season. It was the opening night for their Big Band Holidays Tour and the house was full.

The music at Hill took on several moods, from contemplative to stirring, with Marsalis introducing each song with commentary, then mostly guiding the band from the back row while also playing with them there. The opener, "Jingle Bells," set the tone for the night and Marsalis played a remarkable solo, his fingers moving quickly as he showcased the instrument's upper range.

Guest artists Veronica Swift and Vuyo Sotashe joined the festive set and Marsalis allowed them to shine throughout the night. Swift won second place at the Thelonious Monk Jazz Competition and Sotashe placed third in the same competition and he was also awarded a Fulbright Scholarship and first prize at the Mid-Atlantic Jazz Festival Vocal Competition.

Swift singing "The Man With the Bag" was particularly playful, fun, and imaginative. Sparkling in a golden brown gown, Swift was at ease during her whimsical delivery of the classic favorite. She has been said to have “perfect pitch, tone and phrasing ” in her performances and it was evident here as her voice was crisp as freshly fallen snow.

When going into "Christmas Time Is Here," one of my favorites, Marsalis remarked how the Charlie Brown specials were the only place where you could hear jazz on TV, affirming the excellence of the famed A Charlie Brown Christmas. The arrangement playfully bounced between slow and uptempo while Swift's voiced danced between grooves. It was excellent.

The highlight of the night was "Greensleeves/What Child Is This." For the song's intro, several members of the orchestra and Sotashe sang a cappella with flawless vocal harmonies. It was simply ethereal, with their vocal blendings full of oohs, ahhs, and hums. The ensemble was spectacular and the audience knew it as it clapped and cheered. Later in the song, Sotashe shined with his smooth voice, which proved to be flexible as he adjusted perfectly to variations in tempo and volume just like Swift.

"Silent Night" featured both Swift and Sotashe and was a complete contrast to the lullaby style people are used to hearing. "You’re a Mean One, Mr. Grinch" offered humor and laughter from the audience and was another one of my favorite moments. The arrangement was descriptive and visual with the bass clarinet and saxophone blaring those famous notes, bringing up memories of the recently released movie. And "The Christmas Song" offered many memories of past Christmas Eves even as we learned the song was recorded in the middle of summer during a heatwave.

If you have never seen Wynton Marsalis and the Jazz at Lincoln Center Orchestra perform, you are missing out on one of the greatest jazz musicians and bands of our time. To see them perform during the holidays is an extra special treat and will be a memory that I will enjoy for years to come.

Read more about the trumpeter's area appearances: "Wynton Marsalis and the Jazz at Lincoln Center Orchestra brought incredible musical gifts to Ann Arbor to kick off the Holiday season."