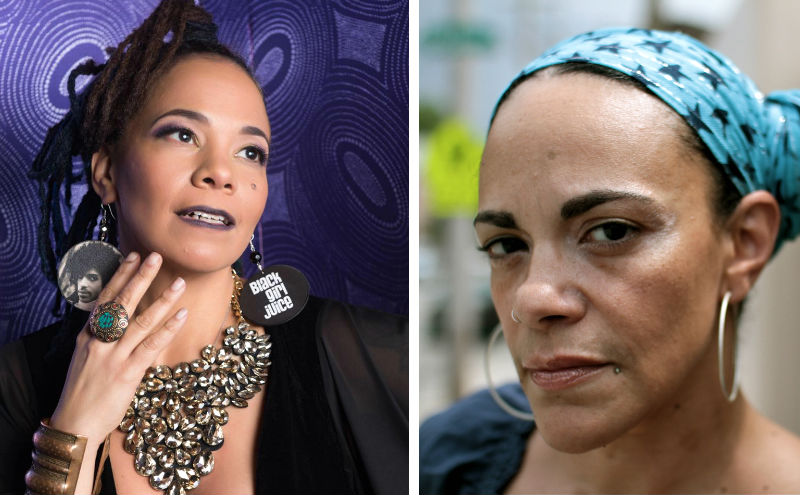 On December 11 at the University of Michigan’s Trotter Multicultural Center in conjunction with the Department of Afroamerican and African Studies hosted Jessica Care Moore and Ursula Rucker for an hour-long discussion titled "Herstory: Hip Hop and Poetry."

Moore, a Detroit native, is most noted for her five straight victories at the "Showtime at the Apollo” competition as well as her publishing company Black Moore Press and her numerous books of poetry.

Rucker, who hails from Philadelphia, has released six albums of her poetry and has collaborated with many well-known hip-hop acts including fellow Philadelphians the Roots.

On Tuesday the women were resplendent. Moore sported a high-crowned red fedora and a colorful denim jacket adorned with an image of the late Ntozake Shange (Google that shit). Rucker had her hair pulled back and her face framed with black cats-eye glasses. Both women were performance-ready and engaged the audience with their own poetry and, perhaps most importantly, historical perspective.

While describing their own personal histories each woman mentioned their influences. But when it seemed as if the importance of people like Sonia Sanchez and Gil Scott-Heron was falling on deaf ears, Rucker took it upon herself to enlighten the audience and she did so with three simple words: “Google that shit.” It was a simple exhortation, something that everyone in the audience was capable of doing, and something that bears repeating: Google that shit.

Writers like Ntozake Shange, Nikki Giovanni, Amiri Bakara, and Maya Angelou, whose art was born in the Black Arts Movement of the late ’60s and early ’70s, produced works that influenced black expression for years to come. But the propensity for these American masters to be left out of school curriculum and the broader American cultural consciousness is less than ideal. Not only does each of their individual works merit attention but the impact and legacy of their work are seen, in many ways, today -- you just have to know where to find it.

Originally, when I found out about this event, I had a very straightforward question that I wanted to be answered:

How are hip-hop and poetry related and where do you draw the line between the two?

To no one's surprise, the answer to that question is incredibly nuanced.

On one hand, as Rucker and Moore related, the roots of contemporary black poetry -- the type of work that they themselves create -- lie in the Black Arts Movement. There is a penchant for activism, for social justice, for bringing awareness to the black experience. And there are emcees who embrace this history and mission. The music of Nas, Talib Kweli, Mos Def, and others reflect this, but not all hip-hop does.

So is lyrical content, historical connections, and cultural awareness what sets poets apart from emcees? Well, not exactly.

According to Moore and Rucker, there is no line between poets and emcees -- there are no boxes to be put in, and if you’re in a box, then climb out. Don’t let yourself be labeled -- by your own hand or the hand of others. Put yourself behind your art. But above all, Rucker told me, make sure that what you’re doing is authentic.

Authenticity. Self-determination. Escaping the boxing-in that is so prevalent in today’s American culture of commodification and consumerism. These all contribute to creating art that transcends labels and makes a lasting impact.

All of this can be seen in the work of Moore and Rucker. These two women have not let themselves be boxed in by convention. From bookending platinum albums to fronting a 15-piece rock band all while fighting social injustice and immortalizing the contemporary black experience there seems to be nothing that can stop these two. And if you want more information about either of these amazing people, and you should want more, you know what to do.

Toby Zurenko is a library technician.