Folk favorites Gemini celebrate a milestone birthday at The Ark 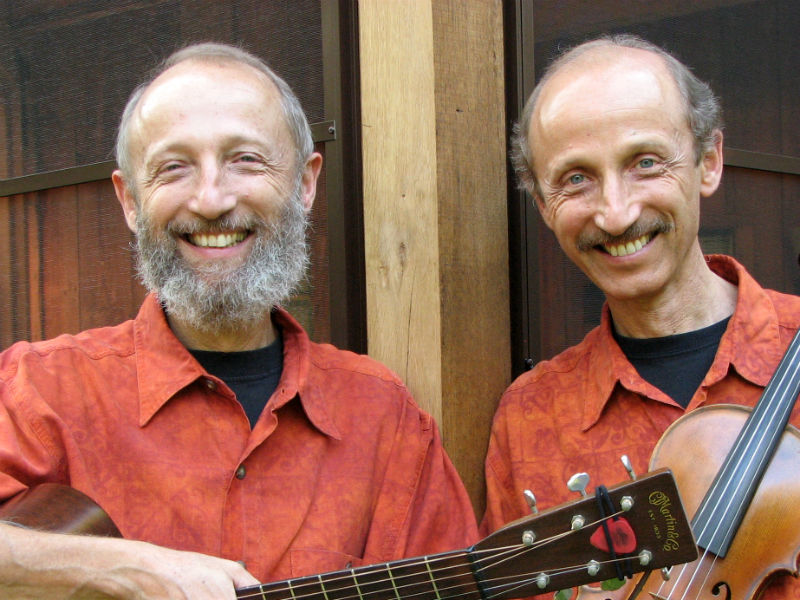 San and Laz Slomovits have been Ann Arbor folk-music mainstays since 1973.

The folk-music duo Gemini has been a vital part of the Ann Arbor music scene for more than 45 years.

Twin brothers San and Laz Slomovits started singing together with their cantor father in their native Hungary when they were very young and started learning instruments at age 7. They continued performing as the family moved to Israel and then the U.S., but things really took off after the brothers formed a folk duo post-college and then moved to Ann Arbor in 1973. For decades they’ve been known for their beautiful harmonies, multi-instrumental talents, and original songs, particularly for youth and family audiences, throughout Michigan and beyond.

Now, the twins are turning 70 and their music is still going strong. They’re planning a “140th Birthday Celebration” on Jan. 3 at The Ark, where the duo has performed countless times over the years. A number of special guests will join the brothers, and the concert will be recorded for possible release. Proceeds will benefit The Ark, where former leaders Dave and Linda Siglin and others have supported Gemini for decades.

“We literally can’t imagine what our music and career would have been like without them. This is a small gesture of gratitude on our part,” the brothers agreed. They answered a few questions about the concert and their career for Pulp.

Q: How did you decide to focus largely on family-focused music -- was that a conscious choice or a natural evolution, or a bit of both?
San Slomovits: Teachers who heard us at our early shows at The Ark, Mr. Flood’s Party, etc. told us that the variety of instruments we played, and our range of international folk music, would be interesting and educational for kids. They invited us into their schools. Gradually we found that playing for kids was a natural fit for us. We released our first recording for kids in 1982 and really started writing songs specifically for family audiences around that time. In 1988 we released a recording for kids and families that had a half dozen songs on it that we still sing today. We continued to play for adult audiences all along, but from the mid-'80s on we focused mainly on the shows for kids and families. In the last few years, we’ve shifted back a bit to playing some more shows for adult audiences. We each play in other bands: I play in a duo with my daughter Emily and in a trio with her and bass player Jacob Warren, and we play mostly for adult audiences.
Laz Slomovits: And I play in a band of local musicians called Harmony Bones with Jeanne Mackey, Tom Voiles, Linda Teaman, John Lloyd, and Eric Fithian. I also perform in a quartet with Eric Fithian, Lori Fithian, and Jean Chorazyczewski, and in a duo with harpist Laurel Federbush. But back to your question about how we came to focus on family music: It was not so much a decision as a recognition that this was something that came very naturally to us.

Q: Your upcoming show at The Ark will include some adult-oriented material. How do you go about choosing specific songs for a concert like this? What do you expect the mix of covers / originals to be?
San: Actually, for this concert, we will be playing almost exclusively our own songs, including ones we’ve written in every decade we’ve been performing, from the ’70s to the present. We will be playing songs and instrumentals we wrote for our adult audiences, though we’ll also include a few songs that seem to appeal to our youngest and also to our most “mature” audiences.
Laz: Besides writing original songs, I’ve also set to music the poems of a number of ancient as well as contemporary poets and we’ll perform some of those as well.

Q: What else can the audience expect at the January show? A guest appearance by Emily, San’s musician daughter, has been mentioned as a possibility -- any other guests or special plans?
San: There will be a plethora of special guests! Emily will, of course, be center stage for much of the evening, playing violin and singing. We will also feature a number of friends/colleagues who we’ve worked with over the years. Peter Madcat Ruth, who we met at The Ark just weeks after we moved here. He’s played on most of our recordings over the years. Brian Brill, Emmy Award-winning pianist and composer from Chelsea, who has played on many of our recordings. Rob Martens, bassist and owner of Solid Sound Studio, where we recorded many of our albums. Willard Spencer, banjo player for the RFD Boys, who played and/or engineered on a number of our recordings. Laura Raynor Pershin, the AADL’s Story Lady, who we’ve collaborated with for years in concerts. Sandy Ryder, co-founder of Wild Swan Theater, who we’ve also collaborated with for many years. Aron Kaufman, percussionist, one of the co-founders of the Lunar Glee Quartet and someone who’s joined us on stage and in the studio for years. Eric Fithian, a bassist who has played frequently in concert with us, and has also served as our sound engineer.

Then there is the young set: Jacob Warren, bassist, working on his master’s at U-M in the SMTD, and a friend of Emily’s since kindergarten. He and Emily and I have been playing regularly as a trio since 2013. Mike Morrison, drummer, U-M percussion degree, who has played with us frequently since 2000 -- his mom used to bring him to our shows when he was a little boy!

For most of the evening, we will be playing with three or four of these folks at a time, but there will be a couple of tunes that will involve everybody. I pity our sound man for the evening! Actually, I specifically requested that Joe Giese run sound because he’s done that at our concerts at The Ark for years and always does a great job. I still pity him! This might be his biggest challenge to date.

Laz: This concert, besides being a birthday celebration, is a chance for us to publicly thank some of these musicians who have supported us over the years, collaborated with us, taught us, and have been good friends.

Q: In addition to your remarkable talents as performers, you’re both also accomplished songwriters. Which is more important to you and why?
San: First of all, thank you for the kind words. I love both aspects of our work. I relish -- and, of course, also struggle with -- that process of a blank page to finished song. It’s thrilling to start with a few words or a snippet of melody and wind up with a song or story. It’s also frustrating as all get out when it doesn’t go well. The live shows are a joy for me. They almost never fail to uplift me. I love interacting with our audiences before, during and after shows; hearing them sing along, sometimes dance along. One of my favorite parts of our shows is Q&A time near the end. I really like creating the shows together with our audiences.
Laz: I’d have to say the same -- I love both the writing and the performing. In a sense, they are two sides of the coin. In songwriting, I love the discovery of what’s inside me and how it wants to come out, and I would write songs even if I never had anyone to sing them to. And it is truly a joy to be able to share something you love with other people and have them respond to it.

Q: Back at the beginning, did you envision that you would be making music together for 45 years and counting?
San: Back at the beginning I didn’t know if we’d make enough to pay next month’s rent and also be able to eat! I feel incredibly fortunate that we have been able to do this. Sometimes it still surprises me.
Laz: Our parents wanted different careers for us: San was supposed to become an engineer and I was to be a doctor. I think the world is definitely a safer place for us not pursuing those professions and, hopefully, it is a tiny, tiny bit more joyful because of the music we’ve contributed.