All the Young Doogs: Ypsilanti's Doogatron makes electronic music with a human touch 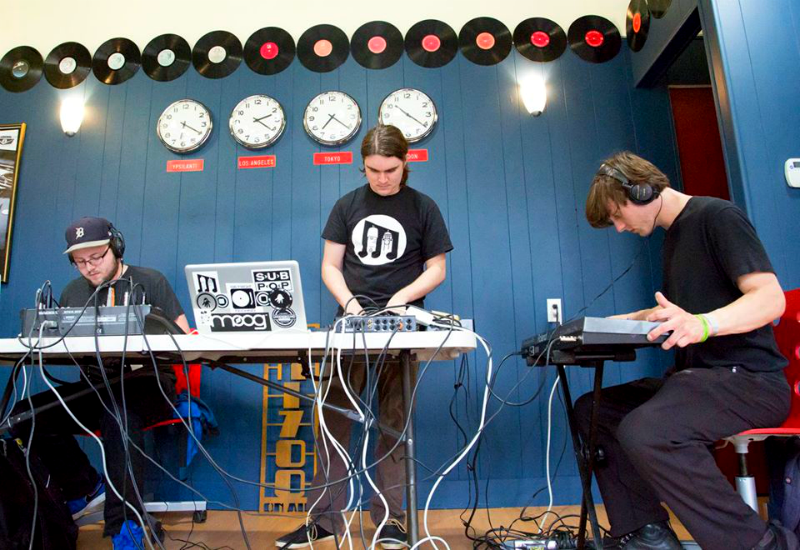 Building the Perfect Robot: Take one Kyle, add a Stevie, mix with a Mike, and you've got a Doogatron. Photo by Kate de Fuccio/AM1700.

Doogatron is one of three acts performing at the Ann Arbor Synth Expo (AASE) on Saturday, November 9 at AADL's downtown location. Below is an interview we did with the group earlier this year, prefaced by a band update written by synth player Stevie:

We've mostly been recording and trying different workflows this year. These new processes have yielded a few singles we're excited about releasing next year. Ann Arbor Synth Expo will probably be the only chance to hear some bits and pieces of those before we put them out. We also did some remixes this year that we're debating on releasing or just keeping in our back pocket to play at shows. The last of four EPs we're releasing this year is out on Friday, 11/15/19. The other three are currently available on our Bandcamp and all streaming platforms. Mike moved to Brooklyn in May so he won't be appearing with us at the AASE but he recorded with us quite a bit earlier this year and he might continue recording with us remotely.

Synth music is often a solitary exercise. It's easy enough for one person to program all the music and not have to deal with band dynamics.

Electronic music duos are more common and count influential acts such as Orbital, Mouse on Mars, Autechre, Boards of Canada, Coil, and many more in those ranks.

Less common is a synthesizer trio, quartet, or quintet, but there is a rich history of synth groups, too, from Tangerine Dream, Kraftwerk, Harmonia, Throbbing Gristle, Add N to (X), and Hot Chip. The combination of personalities mixed with live playing over sequenced sections gives the music a more human quality, and Washtenaw County trio Doogatron is part of this lineage.

Stevie, Kyle, and Mike -- family names are for families -- make loose-limbed techno that mixes programmed parts on computer and live playing on vintage synths. The group's sound is elastic and trippy even as it's framed by linear rhythms.

Doogatron's self-titled debut LP came out Nov. 2, 2018, and the group has followed that with a New Year's Day 2019 mix of original tunes, reworked album cuts, and earlier tunes initially heard on Soundcloud. In February, Doogatron will release the first of at least four EPs/singles scheduled for this year. "Each release comes from one continuous recording session," Stevie said, "so each track will serve as a part one, part two, part three experience," starting with "Before Subsidized Time" b/w "After Subsidized Time."

Stevie gave us the lowdown on Doogatron's history, name, and work process.

Q: Where does your band name come from?
A: “Dooga” became a term of endearment among our group of friends. When Kyle and I decided to team up on DJing and production for the first time it felt like we were forming like Voltron because they had been such solitary activities for us up until then so the name came to mind right away. The idea of forming like Voltron is also a hint at our desire to become more like a collective, open to other collaborators who’d be free to come and go at will without a need to commit to the project long-term.

Q: Doogatron is RIYL ... and why?
A: Detroit techno, old-school electro, '90s electronic albums, jam bands that play electronic music. Techno, electro, and '90s electronica are probably the most obvious influences on what we’re doing, but I mention jam bands as well because a lot of people who don’t usually enjoy electronic music like what we’re doing with interplay and improvisation. I’ve also described our debut album as punky, synth-prog jams because I feel the album’s structure and exploratory instrumental passages remind me of prog-rock but more playful and raw with an approach to recording that’s influenced by Steve Albini.

Q: How much of the music is improvisation that you chop into song-length tracks?
A: Pretty much all of it so far. We’re experimenting with different approaches on some forthcoming material but everything we have publicly available right now has come from pressing record and improvising together. From there it’s all composition by editing and omission.

Q: There's a terrifically woozy quality to a lot of your tracks. In some cases, such as "Unpresidented," the drum beat and the sequenced bass line sound of sync/time. Do you consciously shoot for a mutating sense of rhythm?
A: I don’t think it’s something we think about consciously but more a product of our process/workflow. It can be difficult to produce something that sounds human when you’re making music alone on a computer or drum machines or sequencers. We usually record ourselves jamming together, so I think a lot of our music is less loop-based and less rigidly quantized than a lot of new electronic music producers starting out.

In the case of “Unpresidented,” I was using an arpeggiator on the bass synth, which gives it a sequenced feel, but there’s a number of factors that might put it in a slightly different rhythmic sphere from the drums. The arpeggiator might not have been MIDI synced at the time and only approximated in tempo. There’s a sample and hold LFO that creates a lot of the random changes in the bass timbre, which might’ve been set to a free-floating rate instead of a rate that is synced to the tempo. We also like to play around with “tape speed” after the fact in our editing process and I remember speeding up the synths quite a bit because we had recorded a lot more than we needed.

Q: Who's speaking in the song "Hypnosiscope"? How / why did you choose the sample?
A: It’s actually from The Howard Stern Show. They had a hypnotist on the show to do a past-life regression on one of their staffers. I know it could’ve easily been scripted, but I brought it to the group to use as a sample because it seemed like a really comforting idea of transcending the physical world when he’s talking about being pure energy and being able to communicate with everyone simultaneously without talking, etc.

Q: What is your setup for recording and playing live? Do you ever use any gear from AADL's Music Tools collection?
A: Our recording and live setup were pretty much the same for years. Kyle’s usually on a laptop with the Maschine controller for drums and some sampled sounds. I’m usually on a Novation Bass Station 2 for synth bass and my own laptop running Ableton Live with a Push controller. I use the Push to play plug-in synths or sampled sounds I’ve made into instrument racks in Ableton. Mike usually plays a Roland Juno-1 and sometimes a Korg R3 or a Korg Minilogue or whatever else we might have lying around. One session he brought a tape player with a pitch/speed adjuster, which we used on a couple tracks that we’ll most likely be releasing this year. He’s used some delay and chorus outboard effects but none of us have a lot of effect pedals. Any additional effects we use are usually digital plug-ins, implemented after the fact in the editing/mixing stage.

When we record we usually run everything into my computer to record it all on separate tracks. It’s a little convoluted and anyone starting out could record with a lot less than what we’re using, but this is how we all do our own thing and make it work. When we’d play live with this setup we used all the same gear and ran it into a Mackie 8-track live mixer that we’d have on stage with us to keep the mix in check. Our new live setup is a bit more like a DJ setup with some additional synths to play around with over top now that we have a lot of unreleased recorded material to use.

None of us were Ann Arbor residents at the time so I wasn’t able to get an Ann Arbor library card, but I did bring my laptop into a workroom one day and pulled a Roland JP-08 off the shelf to record samples of all the presets. The synth sound on “Gimme All Night” that kicks in just before the drop around the two-minute mark is a patch that I made from one of those sounds, so AADL did play a small role in our debut album!

Doogatron, Pink Sky, and David Minnix perform on Saturday, November 9 at the Ann Arbor Synth Expo, which runs 12-4 pm at AADL's downtown branch. Follow Doogatron's Facebook, Soundcloud, and Bandcamp pages to keep up with the band's concerts and recordings.