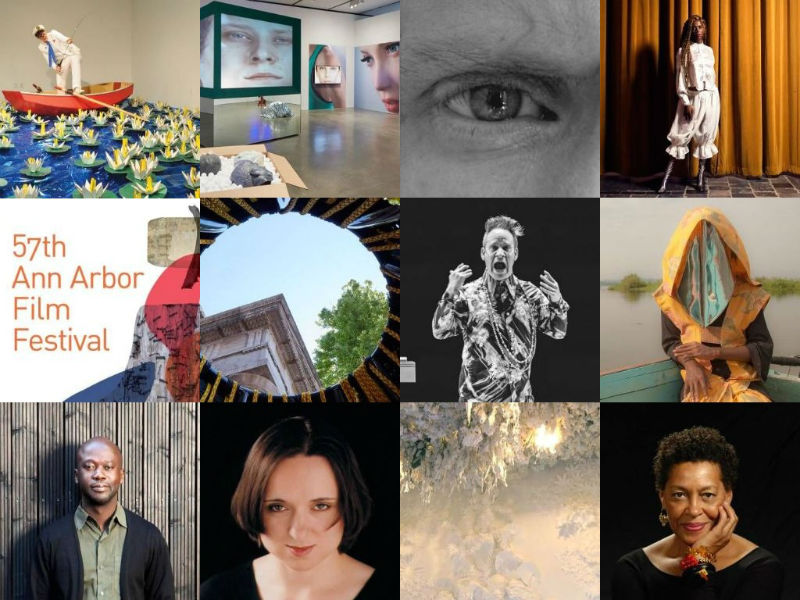 U-M alumna Penny W. Stamps died from leukemia on Dec. 18, 2018, but her dedication to bringing arts and ideas to Ann Arbor community continues with the school and speaker series named in her honor.

The winter lineup of U-M Stamps School of Art & Design's Penny Stamps Distinguished Speaker Series was announced Jan. 11 with 12 events, primarily at the Michigan Theater and many in conjunction with other performances and events at the university and in the community.

Jan. 17
Eva Respini: Art in the Age of the Internet
Michigan Theater, 5:10 pm

Eva Respini is the Barbara Lee Chief Curator at the Institute of Contemporary Art, Boston and specializes in global contemporary art and image-making practices. Respini recently curated Art in the Age of the Internet, 1989 to Today, on view at the University of Michigan Museum of Art (UMMA) through April 7, which brings together more than 40 works across a variety of media and features artists and collectives of different generations and backgrounds to look at this ubiquitous influence. “The internet has introduced a new way of seeing and being,” Respini says. “It’s affected how we shop, eat, date, travel, our social behaviors, our political machines, and how we create and consider art, both online and off.”

Jan. 23, 5:30 pm
JuYeon Kim: Consolation
UMMA's Helmut Stern Auditorium, 5:30 pm
Born in Seoul, South Korea, JuYeon Kim works and lives in New York. She has been awarded several residencies such as MacDowell Colony, Kohler Arts Center, Triangle, and the Roswell Artist in Residence Fellowship. A 2018–2019 Roman Witt Resident, Kim is creating a multimedia installation work in collaboration with the Stamps School community and composer George Tsontakis that seeks to explore themes around Korean “comfort women” -- the female prisoners of the Japanese army during World War II.  Kim states: “Although my installation project was conceived and initiated before my awareness of the #MeToo movement developing in the States and around the world, it seems to me to be so poignantly connected to the historical plight of women everywhere. While the travails of the Korean ‘comfort women’ are an extreme example of women’s integrity being compromised, the assault sadly continues on various levels and by different degrees.”

Jan. 31:
Amanda Williams & Andres Hernandez: Practice or Holding Space for  ______
Michigan Theater, 5:10 pm
A visual artist who trained as an architect, Amanda Williams’ practice blurs disciplinary distinctions. She employs color as a way to draw attention to the political complexities of race, place, and value in cities and raises questions about the state of urban space in America. She has exhibited widely, and in collaboration with Andres L. Hernandez, an artist-designer-educator based in Chicago, and artist Shani Crowe, Williams installed Thrival Geographies (In My Mind I See a Line) at the U.S. Pavilion in the 2018 Venice Architecture Biennale. Andres L. Hernandez re-imagines the environments we inhabit, and explores the potential of spaces for public dialogue and social action. Hernandez is co-founder of the Revival Arts Collective, and founder and director of the Urban Vacancy Research Initiative. With Williams, he is a member of the design team for the Museum of the Barack Obama Presidential Center in Chicago.

Feb. 7:
Juliana Huxtable: Post
Michigan Theater, 5:10 pm
Juliana Huxtable is an American artist, writer, performer, and musician. Exploring the intersections of race, gender, queerness, technology, and identity, Huxtable uses a diverse set of means to engage these issues, including self-portraiture, text-based prints, performance, nightlife, music, writing, and social media. Huxtable references her own body and history as a transgender African-American woman as she challenges the socio-political and cultural forces that inform normative conceptions of gender and sexuality. In addition to her Penny Stamps presentation, Huxtable's work is featured in Art in the Age of the Internet: 1989 to Today at UMMA and she will stage a performance presented by the U-M School of Social Work on Wednesday, February 6 at 5 pm in the Lydia Mendelssohn Theater. Huxtable lives and works in New York, where she is the founder and DJ for Shock Value and part of House of Ladosha, a nightlife collective run by artists, DJs, writers, and fashion icons.

Feb. 14:
Carrie Mae Weems: A History of Violence, Heave
Michigan Theater, 5:10 pm
For over 30 years Carrie Mae Weems, through the use of image, text, film, and video, has created a complex body of work that centers on her overarching commitment to helping us better understand our present moment by examining our collective past. As a result of this work, Weems has received numerous awards, grants, and fellowships including the MacArthur “Genius” Grant among many more. Her artwork is included in public and private collections nationally and internationally including the Metropolitan Museum of Art, New York; Tate Modern, London; the Museum of Modern Art, New York; and Fine Arts Museum of San Francisco. She lives and works in Syracuse, NY. Additionally, Past Tense, a new performance-based work by Weems will be presented by UMS on Friday, February 15 and Saturday, February 16 at the Power Center.

Feb. 21:
Clyde Petersen: Alternate Realities, Intentional Histories, and Queer Survival: Building Your own World in Dystopic Times
Michigan Theater, 5:10 pm
Clyde Petersen is a Seattle-based artist working in film, animation, music, installation, and spectacle. A proud member of the transgender and queer communities in Seattle, Petersen’s work explores identity and narrative form. Petersen’s autobiographical stop-motion animated feature film Torrey Pines, a queer punk coming-of-age tale, premiered in October 2016 and toured the world with a live score. Petersen is also the leader of Your Heart Breaks, an internationally touring queercore punk band founded in 1998, and the host of the internet film series Boating with Clyde. His work has been featured around the world in museums, galleries, and other venues. Petersen is currently working on two new feature films and has a solo exhibition at the Bellevue Arts Museum titled Merch and Destroy, featuring a life-size Ford Econoline van built entirely out of cardboard and a series of fantasy guitars.

March 14:
Mapplethorpe in Performance: Featuring Bryce Dessner and Korde Arrington Tuttle
Michigan Theater, 5:10 pm
This talk brings together the creative team behind Triptych (Eyes of One on Another), a University Musical Society (UMS) co-commission exploring the work of Robert Mapplethorpe. The production will enjoy its world premiere on Friday, March 15, and Saturday, March 16 at the Power Center. Composer Bryce Dessner and librettist Korde Arrington Tuttle will discuss the range of artistic influences that informed Mapplethorpe’s work -- and how the production translates the visual medium into an interdisciplinary experience. Thirty years after the death of Mapplethorpe, we still cannot turn away from what his photos reveal. Mapplethorpe’s work both unites and divides viewers, provoking a consideration of perceived opposites: black/white, male/female, gay/straight, art/porn, classical/contemporary. His pictures seduce, shock, offend, excite, intrigue, and scare us all at once. Triptych seeks to make theatrical the ways Mapplethorpe’s works compel an audience’s complicity and characterize them in the act of attention.

March 18:
David Adjaye: Output
Michigan Theater, 5:10 pm
Sir David Adjaye is recognized as one of the leading architects of his generation. A British-based architect of Ghanaian descent, Adjaye garnered international acclaim for his globally inspired designs, his innovative use of materials and light, and his reputation as an architect with an artist’s sensibility and vision. Together with his studio Adjaye Associates, he has collaborated with artists such as Chris Ofili and Olafur Eliasson and created a diverse portfolio of projects. Adjaye is the author of David Adjaye Houses: Recycling, Reconfiguring, Rebuilding and the recipient of the Design Miami/ Designer of the Year Award (2011). He was appointed an Officer of the Order of the British Empire in 2007 and was knighted in 2017 for services to architecture.

March 21:
Peter Sellars: Art as Moral Action
Michigan Theater, 5:10 pm
MacArthur Genius Fellow Peter Sellars is an American theater director, noted for his unique contemporary stagings of classical and contemporary operas and plays. His staging of Don Giovanni was cast, costumed, and presented to resemble a blaxploitation film; his production of George Frideric Handel’s Orlando was set in outer space; and his staging of Mozart’s Così Fan Tutte was set in a Cape Cod diner. His “post-racial” production of Othello, starring John Ortiz in the title role and Philip Seymour Hoffman as Iago, showed at New York City’s Public Theater to critical acclaim and larger cultural conversations about “blind casting.” Public programs surrounding his 2006 Lincoln Center production of Mozart’s unfinished opera Zaide focused on slavery past and present, as well as an exploration of Mozart’s abolitionist perspectives. Sellars is the recipient of the Dorothy and Lillian Gish Prize and a professor at UCLA, where he teaches art as social action and art as moral action.

March 28:
57th Ann Arbor Film Festival: Image Makers
Michigan Theater, 5:10 pm
The Ann Arbor Film Festival is the oldest avant-garde and experimental film festival in North America, founded by George Manupelli in 1963, during which time he was an assistant professor of art at the University of Michigan. Internationally recognized as a premier forum for independent filmmakers and artists, each year's festival engages audiences with remarkable cinematic experiences. The six-day festival presents 40 programs with more than 180 films from over 20 countries of all lengths and genres, including experimental, animation, documentary, fiction, and performance-based works. As part of the 57th Ann Arbor Film Festival, the Penny Stamps Speaker Series will host an annual program, the specifics of which will be announced at pennystampsevents.org.

April 4:
Sarah Vowell: Live
Michigan Theater, 5:10 pm
Sarah Vowell is The New York Times bestselling author of seven nonfiction books on American history and culture. By examining the connections between the American past and present, she offers personal, often humorous accounts of everything from presidents and their assassins to colonial religious fanatics, as well as thoughts on utopian dreamers, pop music, and the odd cranky cartographer. Her most recent book is titled Lafayette in the Somewhat United States.