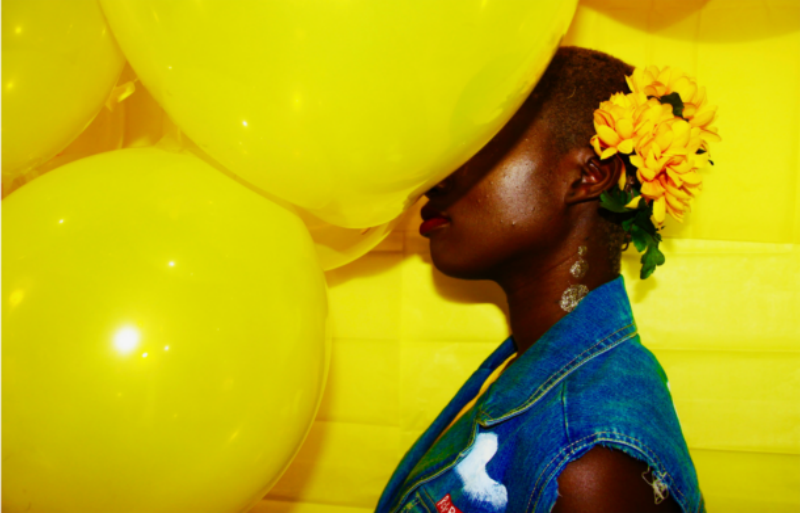 Riverside Arts Center's YpsiNow: Intersections asks this question in its announcement: “What is Ypsi, right now? Its paths, connections, struggles, and joy all interweaving to create the tapestry of Ypsilanti.”

For this second annual iteration of the exhibit -- juried by RckBny, Gary Horton, and Rey Jeong -- the question is answered by Ypsilanti High School students and adult residents working in a variety of media.

The high school students’ photography, collage, paint, ink, and written-word works are clustered on one wall, illustrating the diversity of approach among the teenagers, which is reflective of the overall approach to the exhibition. The adult Ypsilanti artists fill the rest of the gallery with sculptures, installations, and 2D works.

Artist Afua Serwah Osei-Bonsu contributes “fashion illustrations,” which resemble cutouts of sewing patterns. Each print features the collaged clothing in the center of the white backdrop, referencing the minimalism of sewing patterns with a twist of colorful or anachronous imagery inside the shapes. Her works are often collaged from disparate elements to represent articles of clothing. Some images, for example, are comprised of images of dinner plates, cut to resemble a dress. Another uses consumer goods packages, framed by more dishware. Upon first inspection, the components of each collage are absorbed into the whole, representing “clothing.” When observed more closely, however, the works comment on consumerism and repetition with a focus on pattern. There are a total of 13 of these works, with one piece standing by itself next to a grid of 12 framed prints.

Rita Lee’s plaster sculpture All You Other Ramens Are Just Imitating offers a meta-criticism of artistic reproduction and consumerism. The work consists of a bulk-packaging box of Shin Ramyun filled with ramen noodle brick replicas. Of course, her "ramens" are just imitating because they are made of plaster. The process of plaster casting (used classically as the easiest form of reproducing an art object) is an interesting choice as well, further commenting on the tendency of consumerists to reproduce and devour not only a singular product but variations on that product marketed in many iterations.

Chris Sandon’s Painter’s Tape Series was among my favorite in the gallery. Two of his works were included, both of which were installations. The first I saw from Painter’s Tape Series I-X, which is an elaborate wall installation. Found objects such as a clipboard, picture frames, and a wooden slab are positioned on the wall, creating a salon-style gallery display. The wooden supports each have photographs or drawings of a nude female figure, and sections of the images are cordoned off with blue painter’s tape. The impression is of a work in progress, illuminating the intense cropping, focusing, and refocusing an artist goes through in the process of creating a painting or drawing, often from a referent such as a photograph. In this case, the original photographs appear next to the drawings, the tape mimicked in each example.

Across the gallery, a second piece from the Painter’s Tape Series is a large wooden frame leaning against the wall, the painting of the figure appearing to have fallen backward out of the frame due to age. Above the frame and painting, the reference image is displayed, showing the green painter’s tape that the artist incorporated into the final painting. Though it looks haphazard, like the work in progress aesthetic of the blue tape piece, it is clear that this is a commentary on creation and eventual decay.

Photography also plays a prominent role in the gallery space, with four large night images printed on canvas by Lisa Gavan. These four photos represent Ypsilanti at night, with attention to atmospheric conditions fog and light. Juror and artist RckBny has two works in the show, including the image from the exhibition announcement, Yellow Balloon Image. This image represents a young girl whose face is obscured by bright yellow balloons. RckBnye also created a Polaroid display of photographs taken in the same space, presumably during a party, in which balloons crowd the domestic room. Different human subjects appear in the photos, always framed by the colorful clusters of balloons. Some of the photographs are labeled with handwritten descriptions that identify the subjects of the photographs or allude to personal jokes. There are 19 Polaroids in all, one of which stands apart from the main cluster of images, and represents a cluttered pile of balloons and party refuse, suggesting the aftermath of a good time.

YpsiNow: Intersections presents a thoughtful and varied picture of Ypsilanti artists. From students in high school to practicing adult artists, the artwork represents the community from multiple perspectives, paths, connections, struggles, and joy.

"YpsiNow: Intersections" runs through January 25 at the Riverside Arts Center.