Queer Eye for the "Gurl Groups and Boi Bands": Out Loud Chorus sings the hits 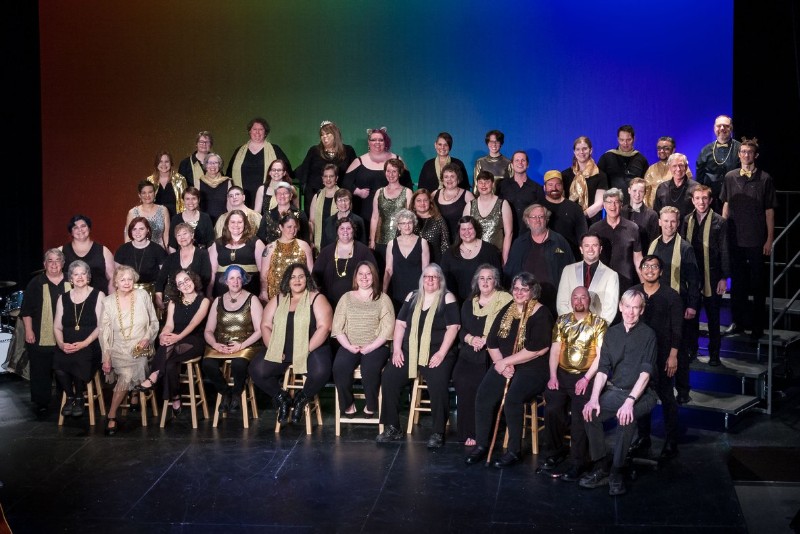 You've got the girl groups, from The Supremes to En Vogue.

And you've got the boy bands, from The Temptations to The Backstreet Boys.

But for the Out Loud Chorus' annual winter concerts, you've got the “Gurl Groups and Boi Bands,” a program of music that plays to the ensemble's unique nature.

“We are unusual because a lot of gay and lesbian choirs are all men or all women,” says Out Loud Chorus board member Tim Hamann. “We have always been a mixed group, truly a community chorus.”

During the January 18 and 19 performances, expect to hear music from Motown groups, '90s boy bands, Destiny’s Child, The Andrews Sisters, The King’s Singers, and more.

"'Gurl Groups and Boi Bands' will be set up like an episode of The Voice," says Hamann. “But we are calling it The Queer Voice. Then we will have skits peppered throughout the program.”

Out Loud Chorus’ mission is to embody diversity and educate the community through performance to reduce bigotry and discrimination against LGBTQ people. Hamann says “Gurl Groups and Boi Bands” is partly based on this mission, partly political, but it's all fun.

“We decided to make this concert a super enjoyable celebration of some of our favorite groups," Hamann says. "Our summer concert honors and celebrates the 50th anniversary of the Stonewall rebellion and will be a little bit heavier, so we wanted to be a little bit lighter this time.”

Hamann, who lives in Ann Arbor, has been involved with the Out Loud Chorus for about a decade.

“During the recession, I lost my job and moved to live with my husband in Ann Arbor," he says. "The director was a friend of mine, so I started attending regularly. It quickly became a great social group.”

Joining the chorus isn't hard, either. "Anyone who enjoys singing can join," Hamann says. "The only thing we ask is that people can make pitch. We treat everyone as a complete equal. We have a mixture of folks, from music majors to people who never studied music at all.”

One of the things the draws and maintains members is the diversity of events.

“We have a really wide range of things that we do,” Hamann says. “Our concerts always have themes or a concept that ties it together. We have done some concerts based on a particular decade, such as a 1940s theme with all jazz music, a concert will music from the 1970s music. … [B]ut we have also done more serious events such as one about transformations, which really focused on being a person who is transgender. We’ve sung with Skyline High School’s acapella group, at the [University of Michigan] School of Social Work, at a fundraiser for a minister who lost her job for being an out lesbian … as well as gigs with other community groups.”

Doug Dormer, a member for four years, shares his enthusiasm for the chorus saying, “The community is phenomenal. I might have a day where I’m tired and just want to sit home but then I go to rehearsal with a bunch of like-minded people. … We sing we eat, we are friends. … It’s a true community.

“There are a lot of groups out there that say, ‘Oh, we are accepting, non-judgmental,’" Dormer says, "and that’s not always the case. But it is here. We accept each other as we are, and we are there for each other. We celebrate each other and music. That’s what we do.”

Out Loud Chorus performs "Gurl Groups and Boi Bands" on Friday, January 18 at 8 pm and Saturday, January 19 at 8 pm at Towsley Auditorium in the Morris Lawrence Building at Washtenaw Community College.