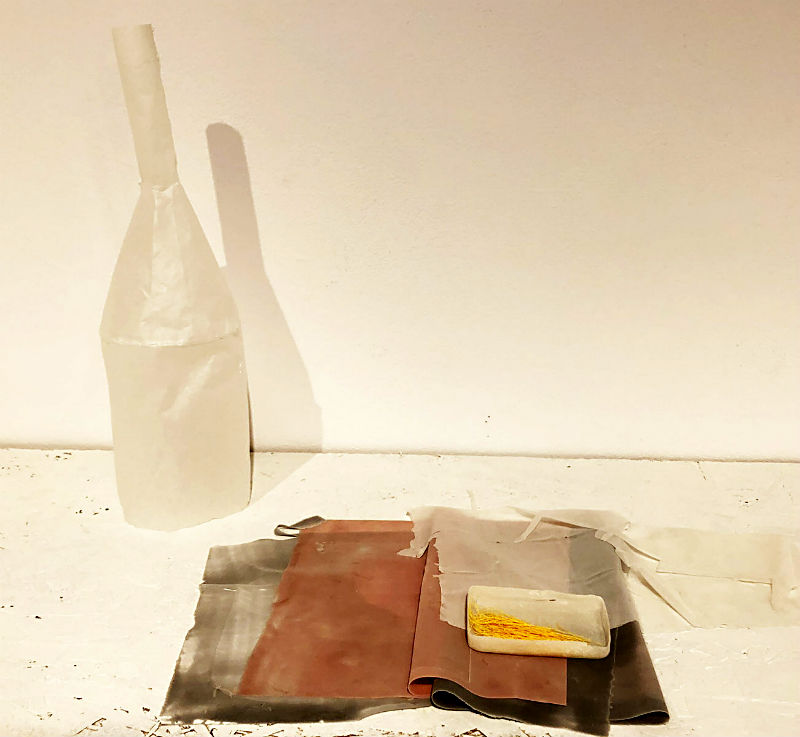 One of Natalia Sarrazin's works at the Ann Arbor Art Center's Works in Progress exhibition.

We live in a world of things. Each chair, cup, table, door, and car in our built environment is the product of human ingenuity, from concept to execution. Works in Progress, an exhibit on view now at the Ann Arbor Art Center, celebrates the creativity of 24 international and domestic designers, at varying stages in their careers, who bring functional works to life through fashion, graphic design, furniture, architecture, and industrial design.

Many of the products and designs on display feature high tech materials and methods not usually associated with what we normally think of as “craft.” The centerpiece for this non-analog approach is You Are the Ocean, a video installation by Ozge Smanci and Gabriel Caniglia, which takes up about a third of the entry room in Gallery 117. It’s not an object at all, but documentation of a computer-assisted visualization of how the mind can alter an image via computer, unmediated by the human hand or real-world material. Using the Unity Game Engine, the designers wrote code that creates a synthesized, uninhabited, and turbulent seascape. Clouds roll and waves crest in response to the subject’s brain waves in various states of concentration or relaxation. The resulting scene is both bleak and beautiful, exhilarating and disturbing. I can imagine that this is the kind of art our cyborg descendants will find beautiful, and it gave me a profound sense of my own obsolescence.

Fleeing to the adjoining gallery, I met with a contrasting and more traditional craft-based approach to object-making. Textile and furniture designer Dee Clements describes her practice as investigating “wellbeing and meaning in the realm of the domestic.” Her three small, vibrantly colorful geometric designs on paper next to three related textiles, projects a sense of emotional ease. Sharp shapes on the paper seemed to effortlessly transition to the softer, more organic textiles and illustrate the artist’s seamless transformation of concept to product.

On the opposite wall, a grid of small photographs by Detroit-based designer Matt Rosner illustrates his creative design process in its earliest stages. This free-associative research, in his telling, will provide “textures, forms, materials and colors” for Superlamp Studio, a series of novel lamp designs that will draw on urban architectural details and construction equipment for inspiration. The photos are quirky and evocative and suggest to the viewer all the ways that the environment can inspire creativity. Disappointingly, though, there were no finished lamps on view to describe how Rosner’s creative inspiration will result in a completed product.

On the wall next to Rosner’s photos is another series of small, unassuming but charming pen drawings on post-it notes by Hawaiian-born Detroit designer Sara Nishikawa. She calls this series things that hold and it catalogs various industrial and automotive containers. Although the drawings don’t seem to relate directly to the pastel-colored silicon objects Nishikawa has on display nearby (which she describes as related to her interest in fake grass), they are satisfying in their own right. 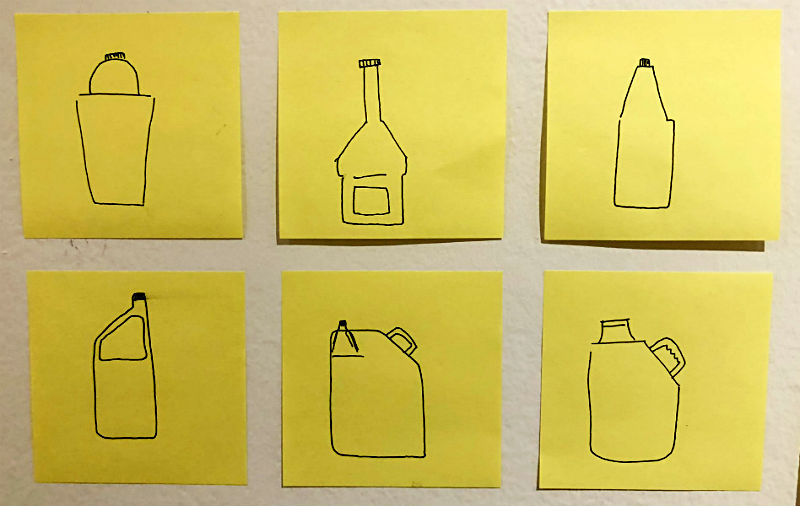 Like Nishikawa, Natalia Sarrazin is fascinated by the concept of the vessel. A native of Colombia and Chile who now resides in Michigan, Sarrazin creates ghostly objects that describe the space they fill. Her fragile-seeming silicone/wax thread pieces project a fugitive, melancholy air. They are shadows of objects that occupy space as remembrances, once held but no longer accessible. Or, as she explains, they represent “the details contained in a moment, forgotten or remembered, treasured or hidden.”

Work in Progress, ultimately, is a show about creative thinking in all its forms: empirical, free-associative, deductive, visionary. The objects and installations are often compelling and occasionally profound, but I also found the exhibit confusing and a little unsatisfying. In my view, the show would have benefited from a tighter curatorial focus on fewer designers in more depth. As it was, I felt compelled to sort through a mountain of material with a minimum of guidance. It’s a tribute to the quality of the work in the exhibit that I left exhausted but wishing for more.

"Work in Progress" will be on view through February 9, 2019. For more information, visit annarborartcenter.org.