Plugged In: UMMA's "Art in the Age of the Internet, 1989 to Today" examines creativity in the Digital Age 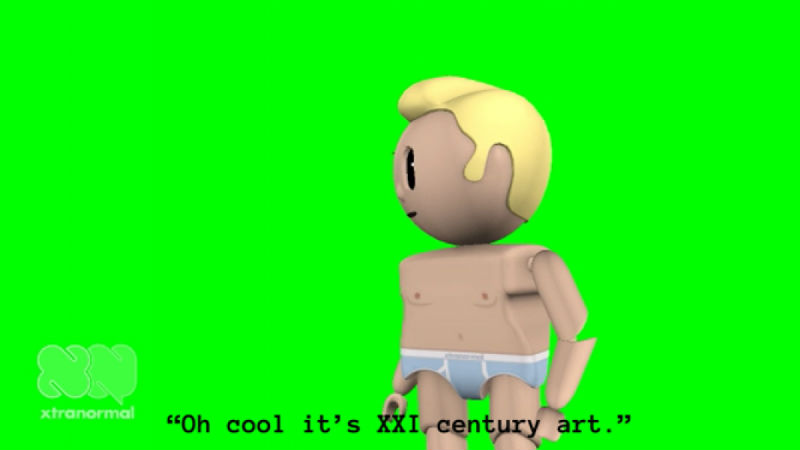 The traveling exhibition Art in the Age of the Internet, 1989 to Today is on loan to UMMA from the Institute of Contemporary Art of Boston, curated by Eva Respini and Barbara Lee (chief curators) with Jeffrey De Blois (assistant curator). The exhibition premiered in Boston on February 7, 2018, and will next travel to New Orleans Museum of Art in mid-April 2019.

The significance of technology’s impact on lived experience is noted the exhibition announcement on UMMA’s website, stating: “The internet has changed every aspect of contemporary life -- from how we interact with each other to how we work and play. Art in the Age of the Internet, 1989 to Today examines the radical impact of internet culture on visual art since the invention of the web in 1989. This exhibition presents more than forty works across a variety of media -- painting, performance, photography, sculpture, video, and web-based projects.”

Some of the influential artists featured in the gallery are Cory Arcangel, Judith Barry, Juliana Huxtable, Pierre Huyghe, Josh Kline, Laura Owens, Trevor Paglen, Seth Price, Cindy Sherman, Frances Stark, and Martine Syms. Many of the artists have worked with ever-changing technology for decades, but curators cite the year 1989 as a marker for the current global interconnectedness we experience as a result of new technologies. In addition, 1989 was the year of the first satellite that allows us to have the now-ubiquitous GPS, the year the World Wide Web was invented, the year the Berlin Wall came down, and protests in Tiananmen Square. Since social movements and identity politics have become more visible and accessible than ever before. 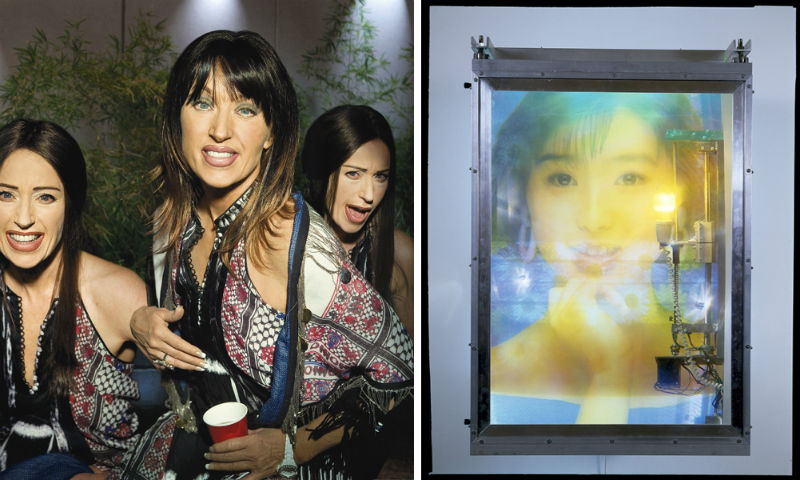 For many college students, the “age of the internet” is synonymous with the age of their existence. For some, there may be no concept of “before the internet.” Likewise, for many people, the internet, social media, and the landscape of technological advancement are as foreign as concepts as “life before the internet” is to post-Millennial generations. This exhibition assumes the viewer is moderately tech-savvy or at least accustomed to the inundation of technology in daily life. Given the range of technology employed by artists in this show, most viewers will be able to engage with a variety of works. As a Millennial, I grew up on the awkward cusp of technological advancements reaching the masses, when dial-up was becoming mainstream and adults had car phones or unwieldy cell phone prototypes.

Many of these early technologies are represented in the artworks on display, such as Cory Arcangel’s Super Landscape #1, 2005, which consists of a row of early 2000s Sony TV screens streaming continuous Nintendo and Nintendo 64 landscapes, or skyscapes, with four of the five screens projecting a blue sky sparsely populated by clouds. These games featured cutting-edge graphics when their console systems were first released in 1983 and 2002. Now, the images appear pixelated and low-fi. The artist “hacked” the gaming systems in order to display his landscapes, one screen of F1 Racer (commonly known as Japanese Driving Game, 1984) and the clouds from Super Mario Clouds (2002). The result is a nod to the gaming set-up of the early 2000s, in which children would gather around their new Sony flatscreen (the screens were flat, the televisions were bulky) on the living room floor and play platform games. 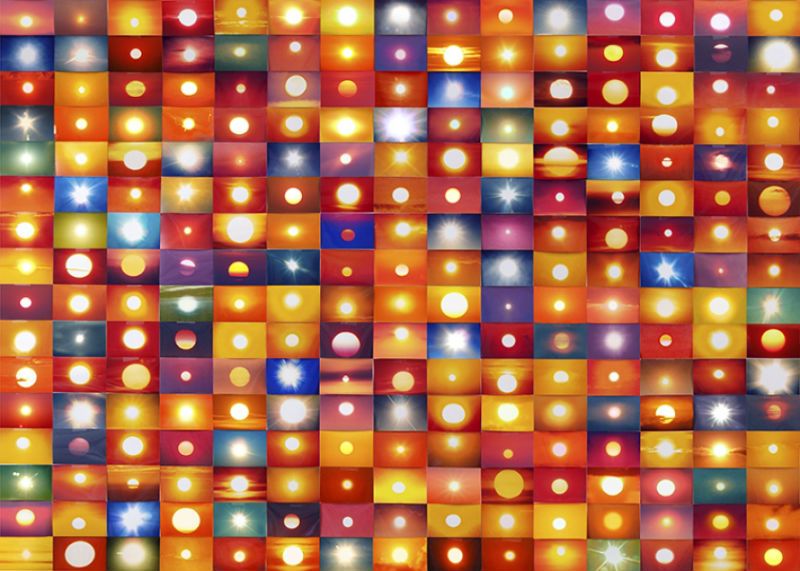 The gallery wall text also elaborates on the extreme impact of the “age of the internet” on all mediums of art, stating, “this exhibition examines how art in every medium -- including painting, moving images, sculpture, photography, web-based projects, and performance -- has been radically transformed by the cultural impact of the internet.” Expect to see “traditional” forms of art such as painting and sculpture as technologically driven. For example, the “computer-driven” paintings by Albert Oehlen were started in 1990. Oehlen disrupts the boundaries between computer-generated art and assistive technology for artists by generating images on his computer, then transferring them to canvas. He then fills in pixels by hand painting. Oehlen says, “It is not the computer helping me, it’s me helping the computer.” This hybridization of the artist’s work and the computer’s work is a common theme in the exhibition, as boundaries between the self and technology become increasingly blurred.

The exhibition curators also define the internet as both a physical and cultural phenomenon; it is “a set of networks, cables, wires, and protocols operated by disparate software and hardware across the globe. It is also a social and political construct: a set of social exchanges that have wide-ranging effects.” These wide-ranging effects are thematically organized in the gallery. Five significant themes are located in the works on display:

“Networks and Circulation" includes works that explore the widespread social and political impact of our previously unimaginable level of interconnectivity; "Hybrid Bodies" examines the question "what does it mean to be human?" in a technologically mediated society; "Virtual Worlds" explores the aesthetic possibilities of computer-generated spaces; "States of Surveillance" investigates the widespread consequences of surveillance technologies; "Performing the Self," in which artists delve into ideas about visibility and self-representation.

The exhibition features an explanatory wall text for each of these five themes, color-coded with the corresponding works in each category. Each category features works that expand on specific cultural trends. Many of these trends became pronounced with technological availability and interconnectedness. Examples of technologies that catalyzed these widespread social changes are cameras, cell phones, body cams, social media and networks, robotics, biotechnologies, surveillance, and the networks and new economies through which information is disseminated.

Though television screens are not a new phenomenon compared to some of the contemporary technology represented in the artworks in the gallery, the technology used to produce them, and their increased prevalence in the 1990s and 2000s represent a marked shift in availability. In contemporary culture, we expect to see multiple screens in any public space we visit, whereas this would have been inconceivable mid-20th century. The gallery is dizzying because it houses so many different screens projecting eclectic video channels.

With homage to early computer technology and early iterations of the World Wide Web, artist Olia Lialina’s My Boyfriend Came Back From the War, 1996, is a clunky, outdated desktop computer, which sits on a table for gallery visitors to interact with. The computer may look familiar to early computer users, and the stylized HTML frames that comprise the interactive website may invoke nostalgia in some. Younger visitors may look at the outdated technology and laugh that this was once considered innovative. Lialina’s website offers a sample of this now defunct but once-prevalent aesthetic. If you need some convincing that this style was once commonplace, just take a look at AADL’s old, old website, which debuted in 1997.

Laura Owens’ Untitled, 2016 is a large-scale screen print on linen. Using Juan Gris’ celebrated cubist painting The Man at the Cafe, Owens alters the image until it is unrecognizable, similar to the culling and close-cropping of pornographic images in Thomas Ruff’s nudes series also on display in the gallery. Owens’ work exemplifies the integration of new technology with established techniques such as screen printing. In these works, she uses Photoshop and other digital tools to alter her images. The methods that Owens employs in her works are now considered commonplace among contemporary artists.

But this exhibition does the important work of locating the origins of these relatively new methods of production in the art world and explores the myriad of ways in which not only art, but everyday life has shifted due to the accessibility of technology.