Chamber of Secrets: Purple Rose Theatre's "Never Not Once" pulls no punches as it explores a family's difficult history 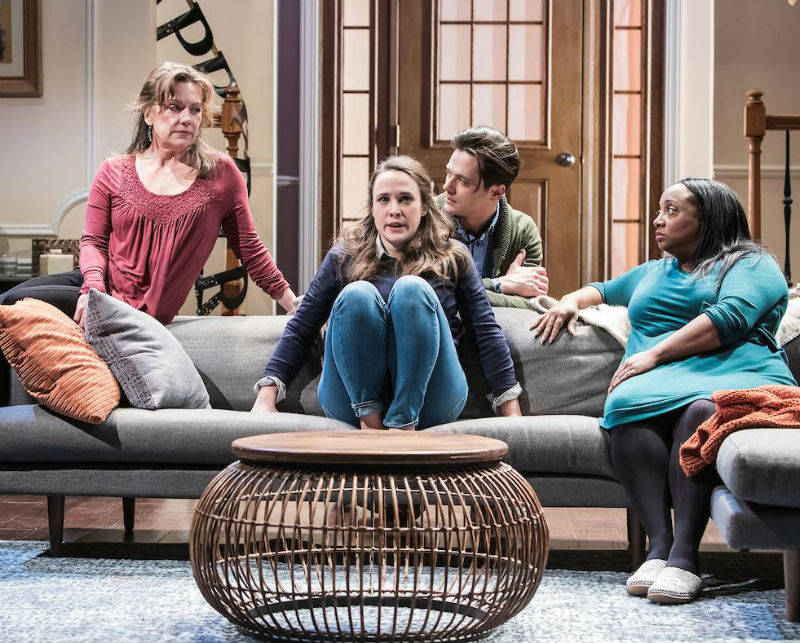 We often hear that people shouldn’t be permanently defined by their worst decision or act. But on the other end of that equation, all too often, are men and women who are irrevocably shaped by the violence committed against them.

When Rutgers student Eleanor (Caitlin Cavannaugh) comes home unannounced, with boyfriend Rob (Jeremy Kucharek) in tow, and announces to her two moms that she aims to track down her biological father, her birth mother, Allison (Michelle Mountain), balks, insisting that the one night stand that left her pregnant in college was so inconsequential that she never even learned the man’s name. But when Eleanor’s other mom, Nadine (Casaundra Freeman), secretly supplies Eleanor with a possible clue regarding her father’s identity, the search narrows, and Allison is forced to revisit a trauma from her past.

Perhaps it goes without saying, but Never Not Once is an intense 90 minutes of live theater, despite some moments of levity in the early going. It tackles some tough stuff, and for the most part, it doesn’t pull its punches. But then, it can’t afford to. If you’re going to “go there,” as Crim has chosen to do, you’ve got to have the guts to go all in. So don’t go to the Rose expecting to passively sit back and be entertained by Never. It’s more a grab-you-by-the-lapels kind of show.

Sarah Pearline’s set design, for one, makes the audience into eavesdropping flies on the neutral-toned walls of Nadine and Allison’s tastefully furnished living room. Shelby Newport’s costumes, meanwhile, employ textured hoodies and sweaters to underscore not only the chill in the air but the coziness of being in this family’s love-filled home. In the end, the different colors they wear pointedly complement one another. Noele Stollmack’s lighting design focuses our attention, builds atmosphere, and, in some cases, indicates that we’re in an alternative locale.

Even so, a few subtle points of disconnect in the Rose’s production result in some murkiness. When Eleanor first visits a man named Doug Larkin (Rusty Mewha), we’re not exactly sure where we are; Eleanor’s boyfriend Rob -- though he’s affable enough and serves a couple of practical narrative functions -- sometimes feels superfluous to the central story; and although characters Doug and Allison supposedly went to college together 20 years earlier, Mountain and Mewha don’t look or feel like peers. Mountain skews a bit old for Allison, and Mewha seems a few years too young to be Doug.

When you manage to look beyond this casting issue, though, you’re left with what is, for the most part, a well-acted, highly charged, gripping drama. Mewha and Mountain have by far the toughest emotional terrain to travel. Though neither Allison nor Doug wishes to take a hard look at the past, Eleanor’s search forces their hand -- and it's almost excruciating to witness Mountain reluctantly having her protective layers tore away. Mewha, meanwhile, skillfully conveys Doug as a man incapable of reconciling what he’s done with who he believes himself to be. And Cavannaugh effectively renders a pain akin to that of an unwitting Pandora; for the pain she unleashes on herself and Allison, by way of a long-buried, awful truth, is of her own bidding.

I’ll confess that I questioned whether the play’s climactic moment would or could ever happen as it does (going into more specifics would venture too far into spoiler territory); and Never’s final scene, acting as a coda, feels heavy-handed -- an attempt to offer a quick ray of hope within an otherwise pretty bleak human landscape. (Plus, it commits the sin of dramatically speaking the play’s title as the final line.)

But the overall successes of Never – which include pressing us to hold each other and ourselves ruthlessly accountable for the care of the human race -- far outweigh its flaws. And politically speaking, it couldn’t have come at a better moment.

Purple Rose Theatre's "Never Not Once" runs through March 16. Visit purplerosetheatre.org for tickets and more information.