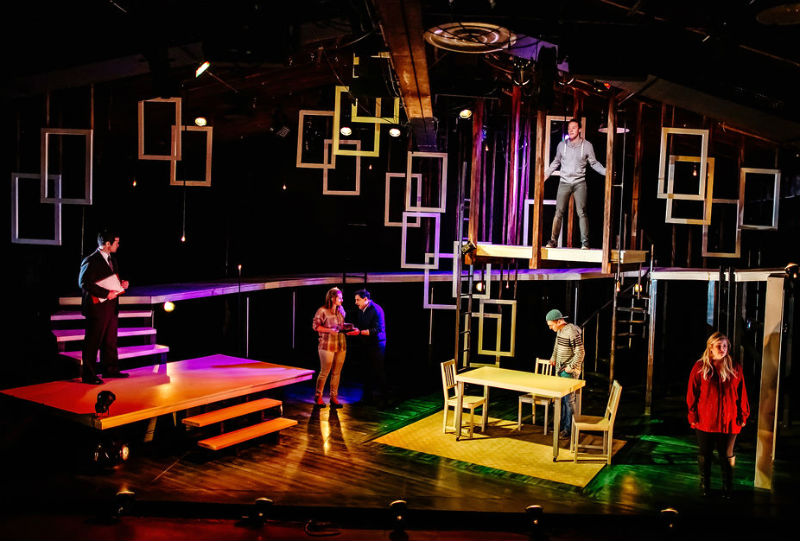 Diana Goodman is a suburban wife and mother who often finds it hard to drag herself from bed in the morning. Her depression is so great that the smallest things upset her. Her manic moments spur bursts of passion and energy that soon sputter out. Her husband and teenage daughter never know which Diana they will confront.

Diana’s problems began with the death of her son when he was less than two years old. But in Diana’s mind he lives on, a distraction, a ghost, an Oedipus drawing her away from her marriage and the needs of her awkward but talented daughter.

Director Matthew Brennan and music director Leah Fox create a stark, taut, tense production in which the music -- soft as a lullaby one minute and blaring and fuzzy as a scream the next -- zeroes in on lives that are always on edge. Next to Normal finds humor as well as sadness in this situation, but it never takes an easy way out.

The mood is captured immediately by set designer Jeremy Barnett. The set is an abstraction in white against black. A glossy white table and four matching chairs are surrounded by white platforms that become rooms and offices. Around the set hang large white window frames. The set is flexible and quietly symbolic.

Next to Normal is mostly a sung-through musical with little spoken dialogue. There’s no show-stopping song, no extended dance routines, but there is a variety of music to capture the emotional rhythms of the characters.

Brennan has assembled an excellent cast. These are roles that are emotionally tense and draining but also can shift from a screech of pain and anger to a whisper of regret and sympathy. Those quick and nuanced shifts are expertly executed.

At the center is Courtney Riddle as Diana. Riddle conveys all the varied and troubling emotions of a person who is victimized by her illness and also by the often conflicting remedies to deal with it, from a cocktail of medications to talk therapy to shock treatments. Riddle has a strong, clear voice that can make those painful shouting matches still be musical. But some of her finest moments are the quiet reflective songs, especially “I Miss the Mountains,” a reverie of going off her meds and experiencing those intense highs and wrenching lows that were in some ways better than the emotional numbing of a drug regimen and “Music Box,” a remembrance of loss.

Ron Williams plays the husband, Dan. Williams brings great warmth and strength to the character while also suggesting that all is not as it seems. He makes a strong case for himself in the songs “You Don’t Know” and “I’ve Been.” Williams combines just the right mix of strength and vulnerability in a strong confident voice that can handle those high-note arguments and those softer reveries.

Elisabeth Garber plays 16-year-old Natalie, Diana and Dan’s quiet and confused daughter who finds refuge playing classical music at school. Garber makes Natalie fierce and excellently embodies Natalie’s belief and burden that she must be the only adult in the family. Garber also provides a strong voice on several songs expressing her frustration, her embarrassment, and her need to break free.

That freedom is represented by an amiable stoner named Henry, who is attracted to Natalie. Isaac A. Orr is funny, warm, and comforting as Henry. The “Hey” songs are a nice display of patter between Henry and Natalie, a charming break from the angry confrontations of the adults.

David Moan plays two psychiatrists: one pushing a drug regimen and, the larger part, one working to find out what’s wrong and what might work to ease the problem. Moan is an Encore regular who is always in fine voice and creates strong characterizations. Here the doctor as rock star and as ditherer allow Moan to provide the best comic moments in the play.

Finally, Matt Pecek has the unusual role of Gabe, the son who died but still haunts his parents. Pacek sings a forceful “I’m Alive” and dances with the sinuous movements of a snake. His mother’s visions see him as the 18-year-old he would have been. But he’s a constant disrupter in her mind, engaged in a never-ending Oedipus-like emotional battle for his mother’s love. Pecek catches the character right, not a villain but a vulnerable, scared boy who uses swagger to hide his pain.

The play is not a downer, it has a message of persistence and seeking the light. But it is also bluntly honest and will leave you informed and moved if not singing.