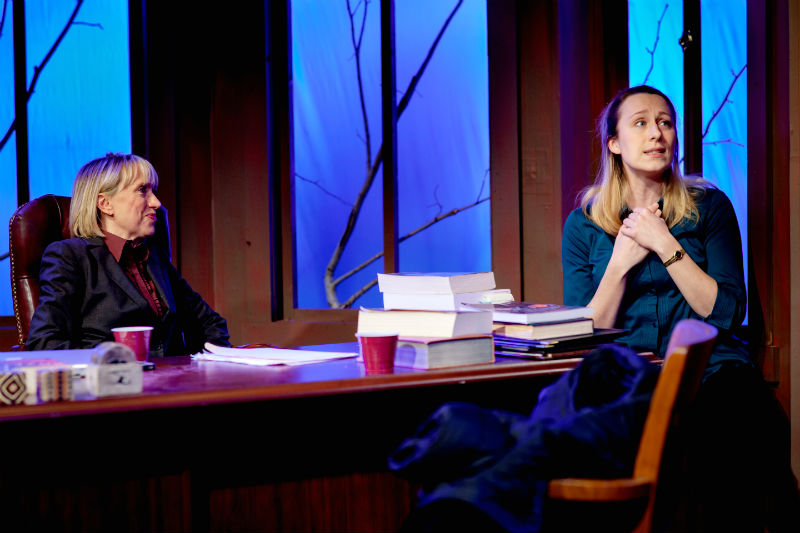 L to R: Diane Hill as Zelda and Sayre Fox as Rachel in The How and the Why by Sarah Treem at Theatre NOVA. Photography by Golden Record Media Company.

It’s a beautiful thing when a play not only passes the Bechdel test with flying colors but offers an intellectually satisfying evening of theater, too.

For Theatre Nova’s production of Sarah Treem’s The How and the Why focuses entirely on the charged conversations between two women: tenured evolutionary biologist Zelda Kahn (Diane Hill) and the daughter she gave up for adoption, post-doc student Rachel Hardemann (Sayre Fox).

As they meet for the first time, Zelda’s department is preparing to host an important conference. When Rachel reveals the radical theory she’s developed concerning the “why” of human female menstruation -- that it acts as a kind of physiological defense mechanism -- Zelda offers her the chance to present her ideas at the conference. When things don’t go well, Rachel’s left to wonder: Did Zelda set her up to fail out of professional jealousy? Or did Zelda just naively give Rachel an opportunity that she and her theory weren’t quite ready for?

Many of the evolutionary theories and arguments that get tossed about in The How and the Why are ones that have been posed in the real world, including Zelda’s so-called “grandmother theory,” which posited that once human lifespans significantly increased, women stopped menstruating at a certain age in order to do the hunting and gathering that the younger women, who were constantly pregnant and nursing, could not do.

Like many people, I love when I’m not just told a story, but have the chance to absorb radical and exciting ideas by way of a gripping tale, and Theatre Nova’s The How and the Why more than fits the bill. Granted, one could argue that Treem’s mother-daughter storyline occasionally feels like mere window dressing to the main attraction of cool evolutionary theories -- particularly when Zelda delivers a tough bit of news late in the play, and its impact feels oddly muted -- but the whole is gripping and engrossing enough that I didn’t much care.

Hill’s Zelda is uber-rational, almost Vulcan, with only occasional cracks in her emotional veneer -- an almost necessary stance, given the sacrifices Zelda’s made to make a mark in her still-male-dominated field. Fox’s Rachel, as a foil to Zelda’s tightly wrapped persona, displays a far broader range of emotions while still projecting a fierce intellect. Rachel’s simmering anger is biting and funny, her insecurity and youthfulness make her vulnerable, and her bracing candor will sometimes knock the wind out of you.

Director David Wolber strikes the perfect tonal balance between these two very different women who are not only related by blood, but by their passion for knowledge and science. Set designer Forrest Hejkal, meanwhile, has created a pitch-perfect backdrop that converts -- via some adjustments made during intermission -- from Zelda’s book-lined, professorial office (with trees visible through the windows) to an unfussy dive bar, where limp cardboard baskets of popcorn (courtesy of props designer Alona Shewach) are the only food available. Daniel C. Walker’s lighting design underscore the contrast between Zelda’s cloistered, cozy office and the scuzzy bar, where the two women have to hash things out. And Hill’s costume design reveals not only the difference in the characters’ ages but the way they view themselves in the world.

At one point in The How and the Why, Treem’s characters discuss the fact that while many people are content with simply knowing and understanding the “how” of things, scientists are those driven to uncover the often trickier answers to “why.”

Writers and storytellers have this same impulse, I would argue. And though the way to elusive truths is almost always fraught and treacherous, as Rachel learns, the journey itself -- like The How and the Why -- ends up being a pretty thrilling adventure.

Theatre Nova’s "The How and the Why" continues through February 24. Visit theatrenova.org for tickets and show times.