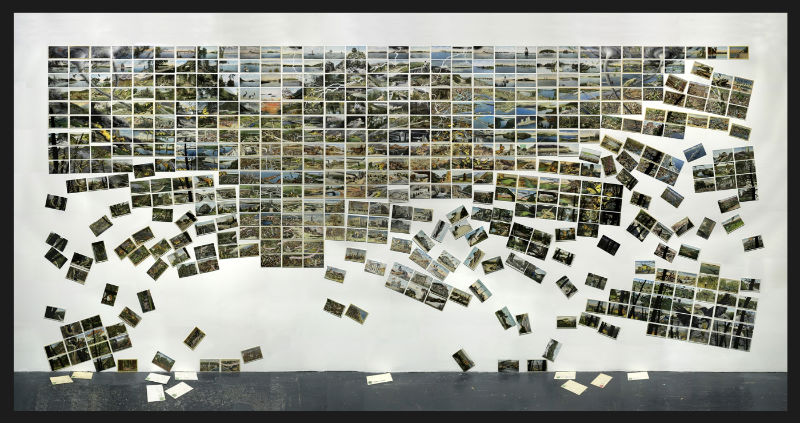 The Institute for Humanities at the University of Michigan launched its Year of Humanities and Environments with the exhibition Paved With Good Intentions by David Opdyke. The show consists of a full wall-sized installation of altered vintage postcards, two animated short videos, and two video channels rotating quotes by politicians. The three media serve to address similar subject matter: the current political climate in America. Climate is an operative word, as Opdyke’s work focuses in on the environment and climate change. His pieces criticize not only American culture but also inaction and stagnancy due to an unwillingness to find common ground. Using iconic, even nostalgic imagery on old postcards as a backdrop, our ideal of “America the Great” is challenged in numerous ways with Opdyke’s artistic interventions.

The gallery wall text, written by Institute for Humanities curator Amanda Krugliak, states, "David Opdyke’s installation Paved With Good Intentions up-ends any snapshots of family vacations, destination spots, and America the Beautiful still in our pockets.” Opdyke’s statement is printed below Krugliak’s and expands on the project. The massive work, titled This Land , was created with 528 postcards from “all across the United States" -- views of local and national parks, cities, rivers, bridges, lakes, landmarks, farms and wilderness -- assembled into a vast gridded landscape beset by environmental chaos.

The postcard collage creates an overall landscape, but upon close examination, there are many smaller dramas (or in this case, disasters) at play. As the grid reaches the bottom of the wall, postcards are falling in disarray, some having landed on the floor. Those that are on the floor reveal handwritten notes by their original owners, creating an eerie connection to people of the past, even as Opdyke’s overall project suggests a future plagued by increased disaster and chaos.

Opdyke says the work is a “present-future mash-up of cause and effect; tornadoes in cities, rivers choked with algae, lightning and wildfires, floods,” and the list goes on, including frogs, giant sea creatures, and locusts. The assembled postcards are incredibly detailed and are arranged to suggest a continuous landscape. Not all parts of the collage suggest disaster, but instead reference aspects of nature that we may not have around much longer, such as the section of monarch butterflies, which fly in the foreground, in front of blimps that read “The End” or “The Ark.”

Opdyke’s short animated videos are presented in ornate gold frames with a set of white headphones hanging on the wall below. The Institute of the Humanities website states that the videos “take place within the visual confines of one or more postcards. The animation is inspired, in part, by Terry Gilliam’s animation work on Monty Python’s ‘Flying Circus’ and by the classical music sound effects in the Road Runner cartoons.” The animations also reference long-established styles of political cartoons.

The two videos are titled Ain’t No Revolution, 2016 and Three Follies, 2016. In Ain’t No Revolution, the Occupy Wall Street movement is referenced, starting with an upbeat instrumental, which quickly transitions to suggest impending danger. Buildings from in the original postcards, monuments to "forward progress," crumble and break into pieces. From the rubble, cherubs holding guns emerge, with an ascending monetary symbol rising like the sun. The second video uses voiceover recordings from the news and politicians, and again uses monumental buildings on postcards -- this time, the Capitol building. The Capitol divides down the center, and from the rubble rises an American flag. These highly charged animations emphasize Opdyke’s concern about the divided political landscape in America.

In addition to the animated shorts, there are two large television screens projecting a series of rotating quotes from political figures. Each screen has a curated selection of quotations, and often the dual screens will contradict one another. The rotation of quotes is set so that one excerpt will fade out as another opposing viewpoint fades into view on the adjacent screen, illustrating the sense of futility that many people feel in the current political climate. The quotes appear as white text overlaid on top of images of industrial pollution and abandoned industrial complexes. One example of these contrasting opinions evident in the sequence of text appearing on the screens: “I’d like to come back to something I said before. We should be talking about global warming. … My plan provides support. My opponent’s doesn’t.” To the left, the screen reads, “I disagree. I am the only one who will deal with federal action … We have a difference of opinion on this.” These two will eventually fade, and the next will take its place, creating a never-ending loop of divisiveness.

Opdyke’s work offers a staunch political message that urges viewers to consider the current issues facing American citizens. His dystopian vision of the future is delivered on media from the past, suggesting continuity in human intervention and its consequences on the environment. In his video work, he continues to investigate the need for environmental action, American politics, and incorporate historical imagery from postcards. For more on Opdyke’s work, visit his website, where This Land, Ain’t No Revolution, and Three Follies are available for closer inspection. Though the virtual tour of the large grid This Land is very helpful, be sure to visit the gallery while it is still on display in Ann Arbor at 202 S. Thayer St.

David Opdyke's "Paved With Good Intentions" runs through February 27 at the University of Michigan's Institute for the Humanities, 202 S. Thayer. On Feb 22, 1-2 pm Opdyke will have a discussion at the gallery with writer Lawrence Weschler.