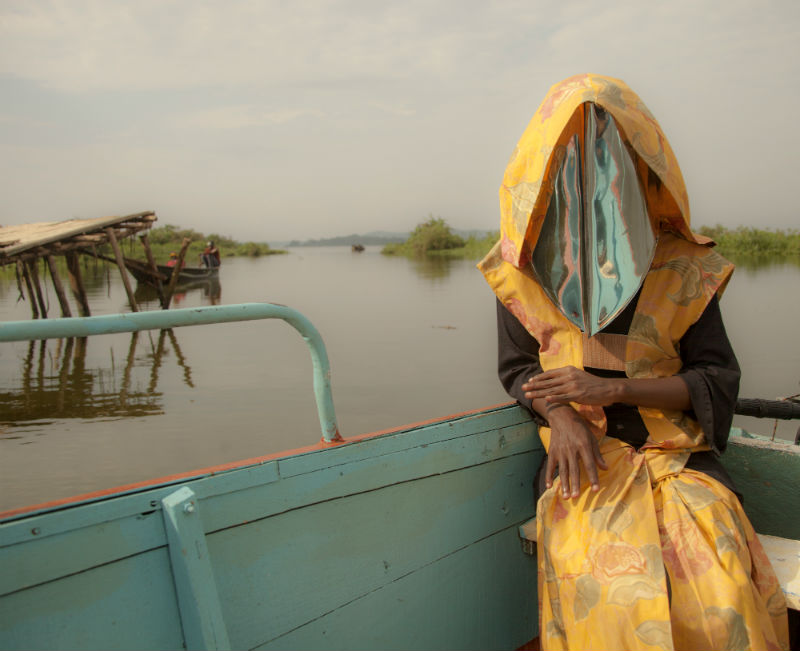 The Stamps Gallery's The Mighty and the Mythic is an interactive exhibit featuring the multi-faceted work of social activist and artist Marisa Morán Jahn. Curated by Srimoyee Mitra, this exhibition is an expansive collection with examples from three of Jahn’s ongoing projects. If you visit, make sure to give yourself plenty of time to view the many videos playing on TV screens around the gallery.

The three projects on display are CareForce (2012 to present), Biblobandido (2010 to present), and MIRROR | MASK (2017 to present). Though these are the artist’s solo projects, Jahn relies on the participation of her collaborators, who are often immigrants, domestic workers, and youths. Stamps Gallery notes that the work is infused with play and humor in order to portray her subjects’ lives with dignity, the ability to critique power, and to “build momentum within their communit[ies].” Jahn bases her practice on her own experiences as the child of first-generation Chinese and Ecuadorian immigrants.

Each of these ongoing projects requires an immense amount of collaborative effort. Mitra summarizes Jahn’s ability to multitask, with “her varied vocational past as a schoolteacher, caretaker, woodshop cleaner-upper, lumber hauler, community organizer, and now university professor and mother.” Jahn’s work fills the enormous gallery space with color and movement. As Mitra states in the gallery wall text, Jahn's multifaceted talent clearly "informs the urgency in her work to find common ground between (her-)self and (an-)other, through the concepts of care and empathy. Each of the works in this exhibition highlights her deep engagement with the stories of everyday people, mundane routines, and a desire to build an inclusive society. Marisa Morán Jahn: the Mighty and the Mythic celebrates and acknowledges the daily struggles and minor victories of the 99 percent that make up the spirit of our society in the twenty-first century.”

One of the first projects you will see upon entering the gallery space is the CareForce Disco. In Stamps Gallery’s continued effort to create an environment in which visitors feel included, welcome, and participatory, the instructions for the CareForce Disco are posted on the standing wall in the center of the space. If this does not illuminate what the Disco is, there are plenty of videos, texts, and works of art to lead you in the right direction. In one descriptive wall text, the Disco is described as a collective effort between Jahn and two immigrant women named Vero and Guillermina. Described as “half documentary, half dance video, ‘CareForce Disco’ raises questions about the rights and needs of immigrant women, the role of socially-engaged artists, and the role of art to foster social change.”

The CareForce project began in 2012 with a piece of software called the Domestic Worker App, which was accessible from a flip phone. The team, led by Jahn, created mobile studios out of old vehicles, which were used by the CareForce team to meet with domestic workers all over the country and provide them with services such as “paper toolkits, an album of dance-able songs featuring the voices of domestic workers, interactive tools, artwork, and dances created by choreographers and caregivers that narrate and mnemonically encode domestic worker history and essential information.” After years of working on the CareForce project, Jahn began showing her videos at film festivals and museums (and now galleries) in order to raise awareness for domestic workers, caregivers, and local organizational groups. The scope of the project is emphasized in the gallery space, with the inclusion of LP records produced by CareForce Disco. Like the videos associated with the project, visitors can listen to the self-published CareForce Disco soundtrack with headphones.

The gallery also includes graphic elements to disrupt the static white space that is customary in contemporary art places. With a bright orange wall decal bisecting the white walls on which the artwork and videos are hung, the gallery seems vibrant and alive, much like the work Jahn is accomplishing. The CareForce project also includes comic-book-inspired wall decals, screen-printed posters, a film poster from Sundance, artifacts, and memorabilia. Throughout the space, quotes from social activists and members of the CareForce project are posted in white text against the orange segment of the gallery wall, emphasizing the collaborative nature of the project. One quote by a Miami-based domestic worker named June Barrett presented on the wall summarizes the necessity of such a project: “One day, we will all grow older and likely become ill. So I do this work from a place of empathy and from a place of love. I am 54 years old and provide care in the way that I would like others to care for me.” This quote illustrates the necessity of the work Jahn is doing, as reminds us that none of us are exempt from the processes of aging.

The second project represented in the gallery is Bibliobandido, which began in 2010. Bibliobandido, or “book bandit,” began as a local legend in El Pital Honduras when Jahn was invited to help combat low literacy rates in the region. A large space in the back of the gallery is walled off, creating a private room for the Bibliobandido: Story Eater installation. Two posters introduce the character and are posted outside of the installation space. One animated poster titled Bibliobandido Diaspora (stylized after an educational poster) reads “Bibliobandido/Born Honduras./Eats children’s stories.” Bibliobandido is a somewhat nefarious character, but he is a lovable villain in the end, as he encourages children to tell him their own stories to “appease his appetite and avert general calamity,” as suggested by Jahn and collaborator Amy Rosenblum. The narratives are part of an ongoing saga, with the third week of every month dedicated as Bibliobandido Week. This is a community act of storytelling that continues to add to its mythology and has even spread to other communities in Nicaragua, El Salvador, and cities in the U.S. such as Seattle, Miami, and New York.

In the dark room where Bibliobandido’s story can be experienced firsthand, there is a cozy set-up where visitors can make books and offer them to Bibliobandido. Upon entering, there are two wall fixtures offering battery-operated candles to take with you through the space if you’re afraid of the dark. Two red, kidney-shaped tables offer glitter pens and other supplies to make an offering for Bibliobandido. On an adjacent wall, a red rug sits snug against the wall, which ends up looking like a tongue, where a small hole in the wall above seems to be speaking at us, saying, “I AM HUNGRY./FEED ME/YOUR STORIES!” But this should not be alarming if you’ve met Bibliobandido and watched the projected video also playing in the space, which reveals his true status as a lovable anti-hero.

Mirror / Mask, the third series presented at Stamps, consists of color photographs and an installation. The curatorial text observes that these works are inspired by Greek, Asian, and African traditions of mask making. The photographs work to disrupt stereotypical depictions of race, gender, and class. Photographs of subjects obscured by reflective surfaces make up the bulk of the work on display for this project. In many of the photographs, the reflective masks obscure the human subject almost entirely, reflecting the surrounding environment back into the camera lens. This is prominent in Forest Prophet, which depicts an unidentified subject crouching in abundant green flora. The large mask hides everything except a sliver of the subject’s shoulder, and reflects the surrounding plant life, making the subject look like a forest creature. This piece is an excellent example of what the curatorial wall text suggests is the goal of the project: to demonstrate how our images of ourselves are reflected and distorted by others.

An installation piece is also part of Mirror / Mask. A small room near the photographs is painted a vibrant mustard yellow, empty except for a giant rotating ball made from 36 mirrored masks resembling those used by her photographic subjects. The masks have unkempt edges and protrude from the surface of the sphere, creating a sense of foreboding danger as it turns. Together these reflective masks amalgamate into a sculpture that rotates 360 degrees, referencing both a disco ball -- the CareForce disco, perhaps -- and Atlas’ globe. Titled We, the work emphasizes the mask as a cultural construct, the spinning of the globe turning them into potentially leering faces. The curatorial wall text suggests that these masks represent the suppressed selves many hide to “uphold the conventions of civility.” If the masks are considered as representations of Other selves, this piece invites the exploration of archetypes and a mission to “truly understand ourselves and each other.” The giant asymmetrical globe is at once a marker of fear and acceptance, the light reflecting off its surfaces creating a calming and meditative effect on the walls.

Jahn’s ambitious projects show how effective art can be as a medium for social change and activism. The Stamps Gallery, in keeping with Jahn’s mission to create accessible and inclusive artwork, continues to work toward inclusive spaces. The combination of these efforts resulted in an informative and interactive exhibit

Marisa Morán Jahn's "The Mighty and the Mythic" is on display at the University of Michigan's Stamps Gallery through March 3, 2019. Visit stamps.umich.edu for more information about special events and gallery hours.