Timeless Ocarinas: The Seven Sages interpret music from The Legend of Zelda 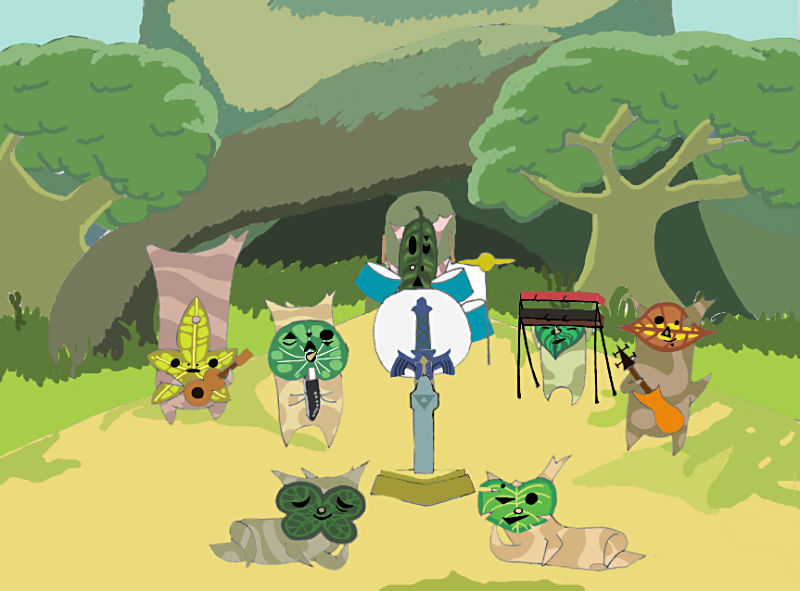 John Coltrane on the saxophone.

Eddie Van Halen on the guitar.

Link on the ocarina.

These are giants of their instruments.

But only one of these masters will be feted by The Seven Sages, a new quintet dedicated to playing music from The Legend of Zelda video game series.

Carey and Hammonds answered some questions in an email interview about how The Seven Sages materialized, which Zelda songs the band will play, and their favorite tunes from the games. The queries were posed by myself and Eli Neiburger, who is deputy director of the Ann Arbor District Library and a member of the Nintendoland Family Band.

Q: How did this project materialize?

Kirsten Carey: It all sort of started with me moving to L.A. I had a GameCube, and I got Wind Waker for right after I moved. I didn’t really have people to hang with or a ton of work hours yet, so I killed lots of time playing Wind Waker. There’s a line in the Throwaway song “Exotic Bird” about this! It took me ages to finish, but once I did, I started ingesting Zelda games like crazy, to the point where I bought a Switch just for Breath of the Wild (BotW). Which says something, because I didn’t really have the money to buy a Switch!

I was still obsessed with BotW when I moved back to Michigan, and at some point, Neal came over and watched me play, and then he had a Switch and BotW within 48 hours! So then, about a year ago, when we were at a show and chatting away about Shrines Quests, Neal pitched starting a band that exclusively plays Zelda music. Obviously, I was game, so we approached friends we knew also had a history with the series. It’s taken a while to wrangle schedules and write charts, but it’s finally happening.

Q: How did you decide which tunes to play?

KC: The philosophy of the band is basically, “If you want to play it, write a chart!” We were obviously going to have to play the “Overworld Theme,” but everything else was up to personal favorites. It just so happened that our personal favorites also spanned a lot of classics, so that was a happy coincidence.

For me, they were pretty easy decisions -- there were certain tunes I couldn’t get out of my head while I was playing the games. For example, the “Song of Storms” was an obvious choice for me. I’ve even started playing that one at jazz gigs -- it’s flown smoothly under the radar, which has made me incredibly happy.

Jon Hammonds: A lot of my ideas came from thinking about which tunes I could arrange in an interesting way. For example, I thought it would be fun and effective to put a dance beat behind the tune that plays when you're in a house, even though that music on its own doesn't make the best performance piece.

Q: Since most of the songs are short, do use the melodies as jumping off points for improvisation? How did you go about arranging the music for the ensemble?

KC: We’re not writing these tunes as if they’re “heads,” like a jazz arrangement. There are also way fewer solos than we were initially imagining. Each arrangement has its own little “trick” to elongate the forms -- sometimes through improvising on melodies. There are definitely plenty of points within every song where the fact that we’re all experienced improvisers comes in handy.

I loved including Easter eggs from the games. My “Song of Storms” arrangement begins with a dialogue between the guitar and the keyboard that mimics how you learn the melody on the ocarina in the game. Or, in another chart, I deduced all the pitches you hear in a Guardian battle in BotW. It’s this fun puzzle of, “What kind of Easter egg or insinuation of the game’s action can go in here?” Or, “How can I insert a taste of another song here?” It’s super nerdy and a really fun way to write.

JH: If you listen closely to a lot of these tunes there are usually a lot of layers. That is something that I've focused on because you can pull the music apart and try to find the best way to fit them to our instrumentation. From there we can do a lot of creative things. There have been a few times that we have looked at an arrangement and tried moving a note or a melody to another player or tried using a different sound. Workshopping has been a big part of the process.

Q: What are the most difficult tunes to play?

KC: My “Song of Storms” is proving difficult. In Ocarina, when you play the “Song of Storms” in the proper place, the music speeds up and changes key. I took that to its most absurd possible conclusion and have us speed up as we move through all 12 keys, building to the last iteration of the melody, which changes key five times -- while really fast! It’s doable on the guitar, but less so on the keyboard or EWI.

For me, there’s going to be some pretty breakneck guitar pedal switching, so that’s going to be a challenge. Deducing timbres has been pretty difficult. Actually, Stefan Carr of Junglefowl is building me a square wave pedal to help me out with this!

JH: Maybe we should try playing the music from the water temple from Ocarina of Time and see if it proves as difficult as that dungeon.

Q: Which Zelda game has the very best music, and why is it Wind Waker?

KC: It’s interesting you say Wind Waker -- that was the first platformer Zelda game that was composed by a team of people, not just Koji Kondo. It was also the first Zelda score to use any non-MIDI instrument -- though most of the score is still MIDI, of course. I recently wrote a kind of history of Zelda music for my day job, so this is all at the top of my brain.

My personal favorite is Breath of the Wild -- it’s actually my favorite video game score, period. It’s so expansive -- so many different moods, yet everything compliments the game so perfectly. It feels symbiotic. Plus, I’m a sucker for the “actual orchestra” vibe. And the timbre of the synthesized sounds is also just so intricate and deliberate. And it might be the first Zelda score to really use electric guitar?

JH: There is some great music in Wind Waker. I really enjoy hearing the influence of different folk traditions in that soundtrack. The main theme and a few other tunes sound like Celtic music, and the music from Dragon Roost Island seems like Andean panpipe music. So maybe that's why it's Wind Waker, but I am a big fan of the dark tones of Majora's Mask. I hear a lot of Chinese Peking Opera influence in that one by the way.

Q: The Breath of the Wild music is so different from all other Zelda music.

KC: I’m arranging a medley of two pieces -- I don’t want to say which two, but you can probably deduce it from my answers to other questions. Hopefully, we’ll do more in the future, but it’s a start! I wanted to get my absolute favorites out there for the first show.

Q: In which ocarina song do you see the most potential?

KC: My knee-jerk reaction is to say “Song of Storms,” just because I have a heavy bias towards that one. I’ve got a few ideas for “Lost Woods” gaining momentum in my head that I haven’t been able to get together for this show. But we’ve actually arranged quite a few from Ocarina and have added all sorts of surprising twists.

JH: I think there is a lot that could be done with "Zelda's Lullaby" since it's so iconic to someone familiar with the games but also so simple. That's one I would like to play around with at some point.

Q: Name your top five Zelda songs and tell us why you picked them.

KC:
1. “Song of Storms” (Ocarina of Time / Majora’s Mask) - A classic earworm! I became immediately obsessed with this song when I first encountered it in the game - it’s just one of those pieces of music that makes me happy every time I hear or play it.
2. “Guardian Battle” (Breath of the Wild) - There’s so much anxiety associated with the circumstances you hear this song, but it’s amazing - super heavy, yet the violin melody’s so sparse. The more I dug into this one, the more brilliant I thought it was - so many intricacies, odd meters you don’t notice happening because they’re so smooth. My partner recently remarked that it sounds like something I would try to write, which might explain my affinity somewhat.
3. “Akkala Ancient Tech Lab” (Breath of the Wild) - I think this was the moment when I realized Breath of the Wild had my favorite video game score ever. It’s groovy and weird at the same time. Plus, Robbie has an unexpected rock guitar joke built into his dialogue, which obviously endeared me even more.
4. “Gohdan” (Wind Waker) - This is the music accompanying the Tower of the Gods boss battle. It sounds like some insane, demented hybrid of Baroque harpsichord music and Philip Glass. I remember my surprise when I first heard it! I really struggled with that battle, too, so this music kept me from succumbing to anger.
5. “Lost Woods” (Ocarina of Time) - Such a happy piece of music! I can’t help but dance a little. For whatever reason, if you were to ask me to sing the epitome of Zelda music and barred the theme song, I’d probably sing this. It’s stuck in my head all the time.

JH: I'm not sure I can pick a definitive top 5…

1. “Gerudo Valley” (Ocarina of Time) - This is classic Zelda music. I love that flamenco style.
2. “Forest Temple” (Ocarina of Time) - There are some complex rhythmic layers with weird vocal sounds over an ambient background.
3.“Milk Bar”  (Majora's Mask) - It's a catchy tune that sounds like something an actual bar band would play.
4.“Magic Hag's Potion Shop” (Majora's Mask) - It's spooky and silly and there's a lot going on.
5.“Midna's Lament” (Twilight Princess) - This piece sets the mood really well for this story. I think it first plays when you are experiencing Hyrule Castle in the twilight realm for the first time.

If I had 6 spots I would include “Dragon Roost Island” from Wind Waker.