Sweetness & Fight: FUBAR leader Randy Tessier steps out on his own with "Sugar Town" 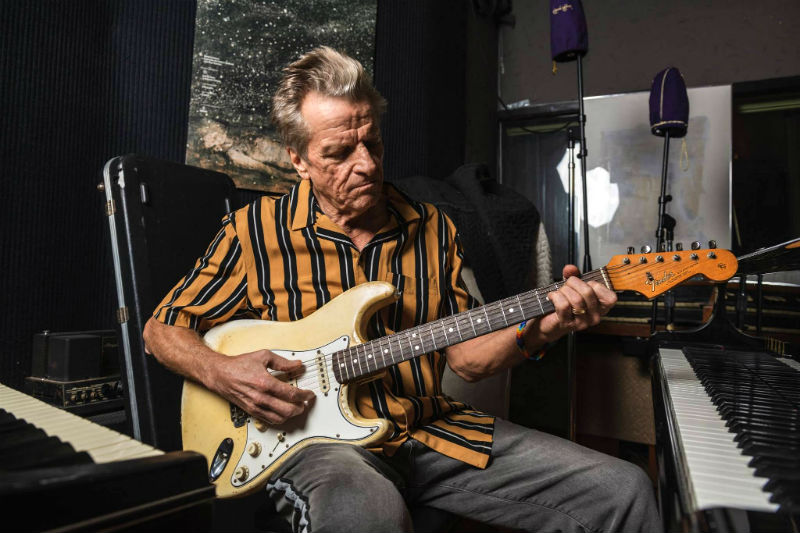 Area music fans know Randy Tessier first and foremost as the front man for the popular local band FUBAR, but he also works as a solo artist. Five years back he released a solo album called Hold Me Close, and now he’s following that up with a new six-song EP called Sugar Town.

The EP showcases Tessier’s love for a variety of musical styles, yet all feature his trademark gravelly vocals and guitar. “It’s Too Late” is a new take on old-school soul, complete with a horn section. “He Lifts Me Up” is bluesy rock, while the title song is catchy acoustic pop.

Tessier’s songwriting here is ambitious. “Texas Blues” paints a portrait of a young woman trying to escape, while “A Child Asked Me” is an anti-war song. “Incarceration: Marquette County Jail” includes the great line, “It’s not that I’m a spineless man / it’s just that I need help.”

Tessier answered a few questions about the new record via email:

Q: What led you to record this batch of songs at this particular point in time?
A: This recording project grew out of my association with the composer, arranger, and keyboardist Chris Benjey. After playing on the Hold Me Close disc a few years back, he and I embarked on a Joe Cocker Tribute Band endeavor and became fast friends. Benjey, having worked at Muscle Shoals studios, and having his own home studio, encouraged me to write a song and we'd record it in his garage studio. That song, "It's Too Late," led to the idea of a set of songs, and subsequently, to my writing a couple of new things, as well as a rethinking and revising some 50-year-old tunes. There was some conscious choice here, but it is also about rusting rather than burning out. About raging musically against the inevitable dying of that light.

Q: You’ve always shown an appreciation for a wide range of musical genres, and that really comes through on this collection of songs. Did you specifically set out to pursue a different style for every track?
A: The genre-bending from song to song is because I love a tune as much for its catchiness as generic origins. A response, perhaps, to the dangers of an aesthetic mono-chromaticism that lurks beneath enslaving oneself to style?

Q: You’re a big advocate of improvisation and constantly putting a different spin on a given song. How does that affect the way you approach the recording process?
A: There was never a complete band playing together on any of these tracks. The sax solos by Dan Bennett and Bobby Streng were derived from the coolest parts of a number of cool takes being cut and pasted together into a seamless solo. Good jazz players must have their way in these things. Dan Bennett’s, Bobby Streng’s, and Ross Huff’s solos on these cuts reflect my love of jazz and classical music. My philosophy is to let the music be the muse, but always submit the muse’s leadings to Geoff Michael’s ear. Resist the desire to put style over substance. And always channel the traditions as you would your inner child.

Q: Is “Incarceration” based on real events?
A: I spent 60 days in the 100-year-old Marquette County Jail over New Year’s from 1971-72. The charge was use and possession of pot. It was freezing cold and I spent most of that time in solitary. So, yes it has roots in real life. The perspective of the singer is very much that of someone who thinks they are going to prison for at least 10 years because I thought I was! Sophia Hanifi and Dave Keeney provide the high lonesome vocal accompaniment. Bobby Streng springs the sax solo surprise -- one would expect a fiddle or harmonica. Keeney is on the dobro.

Q: What’s the story behind “He Lifts Me Up”?
A: "He Lifts Me Up," even though I am a devout atheist, is a gospel song based on my strict Catholic upbringing meant to reflect a “What would Jesus do?” celebration. Does it sound like a live group reacting spontaneously at a gospel meeting? A slickly produced live recording? In truth, it was meticulously put together over a number of sessions. The crowd enthusiasm sounds are indeed samples of the intro to Marvin Gaye's "What's Goin’ On" as well as crowd noise from his later disco hit “Got to Give It Up." Even the little Dan Bennett sax squeak was purposely put there to create the illusion of spontaneity. Geoff Michael's drum program pushes hard.

Q: Why the EP title Sugar Town?
A: Listen to [the song] "Sugar Town." The whimsical life philosophy it offers caught my ear in my dotage. Joe Fee’s tuba is so bass on this one. Yes! Jesse Fitzpatrick of Trees completes this duet. Don Kuhli's brushes and horse hoof clip-clop woodblocks make it real. Six-year-old Mia Benjey, as well as Nancy Sinatra herself, arise from the choruses as they progress. The "la la las" are also nice, along with Benjey’s accordion and human whistle. Lee Hazelwood wrote it.

Q: Do you have a favorite of these new songs?
A: While I think "It’s Too Late" is the most accessible, I really like "A Child Asked Me" because of the subject matter and groove. A war protest song? It’s in my DNA. "Texas Blues" is, of course, not really a blues. It is about the war on women's health and social injustice that ensues when limited choices produce unintended and tragic consequences. It's about Roe v. Wade. The goal was to tell a story with no overt moral or message and yet speaks volumes to the threat at hand. A showing rather than telling. Narrativism, storytelling over didacticism. I love the crunchy grungy effect Geoff captured as well as the lyrics.