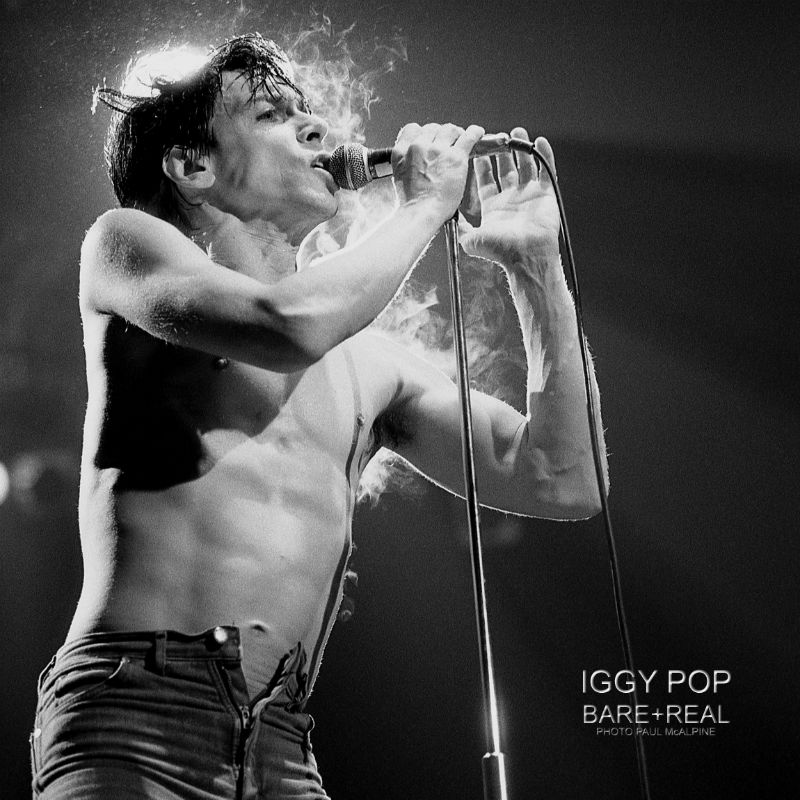 Iggy Pop is a photographer's dream.

And that's exactly what photographer Paul McAlpine wanted to convey in his new book of Pop pix.

"BARE + REAL is a book about life -- passion, art, music -- keeping your eyes open and friends near," McAlpine said. "The book is filled with wonderful images that I feel have aged well with time."

McAlpine first shot Pop in 1977 at the first American concert of The Idiot tour in the photographer's native Boston. For the next decade-plus, McAlpine toured with Pop numerous times and amassed a huge collection of concert photographs featuring one of rock 'n' roll's greatest frontmen.

The limited edition BARE + REAL is 236 pages of the best of those photos, plus introductions by McAlpine and Pop, all housed in a 12" x 12" LP-sized slipcase.

I emailed with McAlpine to find out more about BARE + REAL and how he came to be Pop's go-to photographer -- or Jim, as he calls the man born James Newell Osterberg Jr. 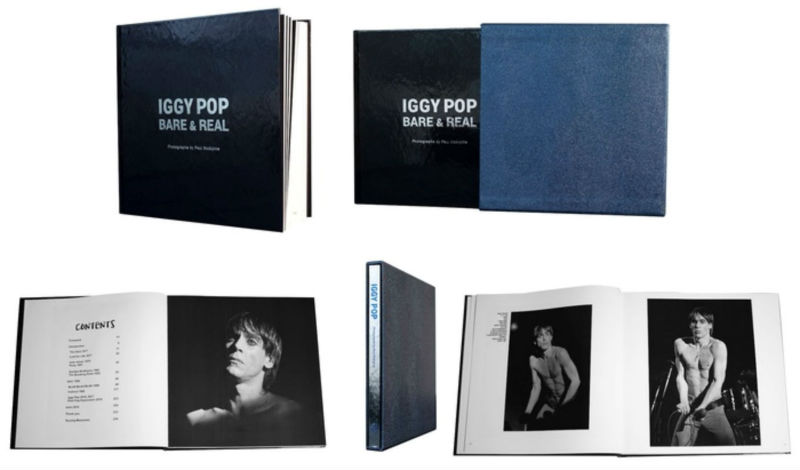 Q: How did the book come together?
A: My original intention was to create a simple photo document of our time and early on I showed a rough to guitarist Kevin Armstrong. Kevin, as you know was the guitarist on BLAH BLAH BLAH and did some very cool work over the years -- Thomas Dolby, then David Bowie’s guitarist for the historic Live Aid gig. Anyway, Kevin suggested adding more descriptive text to help those outside understand the inside. The book begins with his work created in Berlin -- The Idiot and Lust for Life -- these recordings along with David Bowie’s Heroes sessions could be called their Die Brücke era 1976/78 -- as it was a “bridge” for both of these artists in many ways.

As a music photographer, I couldn’t dream of a better muse than Iggy. Rock 'n' roll should never be just another night. It was always difficult to predict his next move and this is what kept the edge sharp. Those who don’t know the guy will laugh but I always looked up to Jim as an older brother figure. Yeah, he had his moments -- there is nothing wrong with passion. It seems to me there are people who drift through life and others who are fighters. Jim is one of the fighters and this is something to respect. I always had faith in what he had to say -- no Top 40 jingles created solely for money -- his words are inspired by real-life experiences and, at the end of the day, this is what counts in my head. In BARE+REAL as the BLAH BLAH BLAH tour began I wanted to show the other 23 hours of the day. When you are on the road you know somehow your day is all connected by the music -- you find yourself sitting sleepy headed in the back of a car quietly speeding by the Eiffel Tower humming "The Passenger" -- it just happened that way. I think people will find the Instinct period also interesting since each new project you rediscover yourself. It was very important to me throughout the project the book remain as a pure photo document. BARE+REAL was created for everyone in the book and if other people find something that touches them fine. 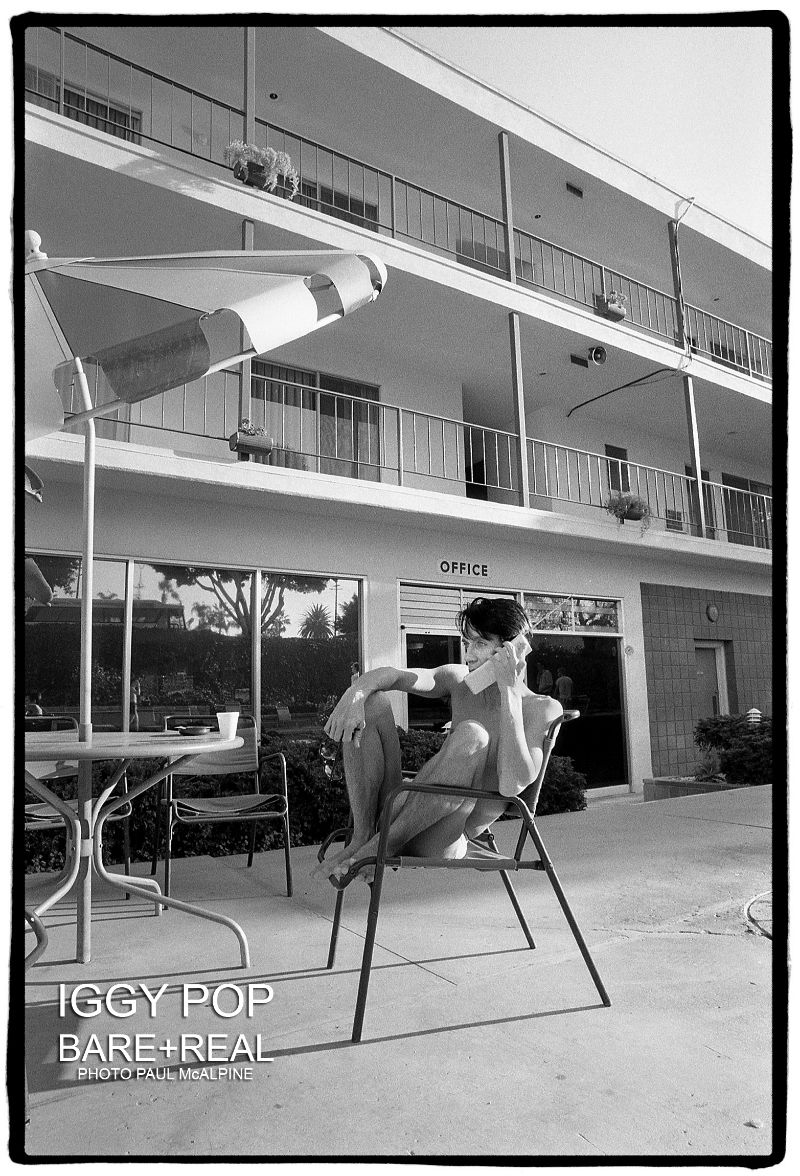 Q: Do you remember when you first heard Iggy's music?
A: I was in the deep end of the pool at an early age. Born in 56, a child of the '60s I recall staying up to watch the first appearance of The Beatles on The Ed Sullivan Show. As the Summer of Love ended and the '70s began I wanted to be a painter. The general mood of America was changing fast and this is reflected in the music of the day. You know having a draft card arrive in the mail was a pretty stiff shot of reality when you are just a kid. Boston being a college town had fantastic rock radio with a completely open menu. I would listen WBCN at night and hear all the new music and this is where I imagine first heard The Stooges. “Loose” from Fun House is my all-time favorite song.

Q: You've photographed tons of music giants who put on great concerts, including Queen and Aerosmith. But you've described Iggy as your muse. What makes him No. 1 for you?
A: You can have costumes, smoke, and lights but Iggy is real -- what he has to say is something we all feel, we all need. I think this is why his words are just as important today as they were when the records were first released. As for being my muse -- every painter or photographer meets someone they are just in sync with. It is not something you plan; it just happens. I felt it instantly -- after The Idiot gig at the Harvard Square Theatre I called a friend who worked for Mainman in London then processed the film and was looking at prints as the sun came up.

Q: How did you finally meet Iggy and what was it like?
A: It was later 1977 on the Lust for Life tour -- you have to understand there were no rules at the time like today. Going to a gig there was just one pass used by band, press, friends -- you could just shoot, then afterward grab a beer backstage and say, “Hey, it was really cool tonight -- thanks.” 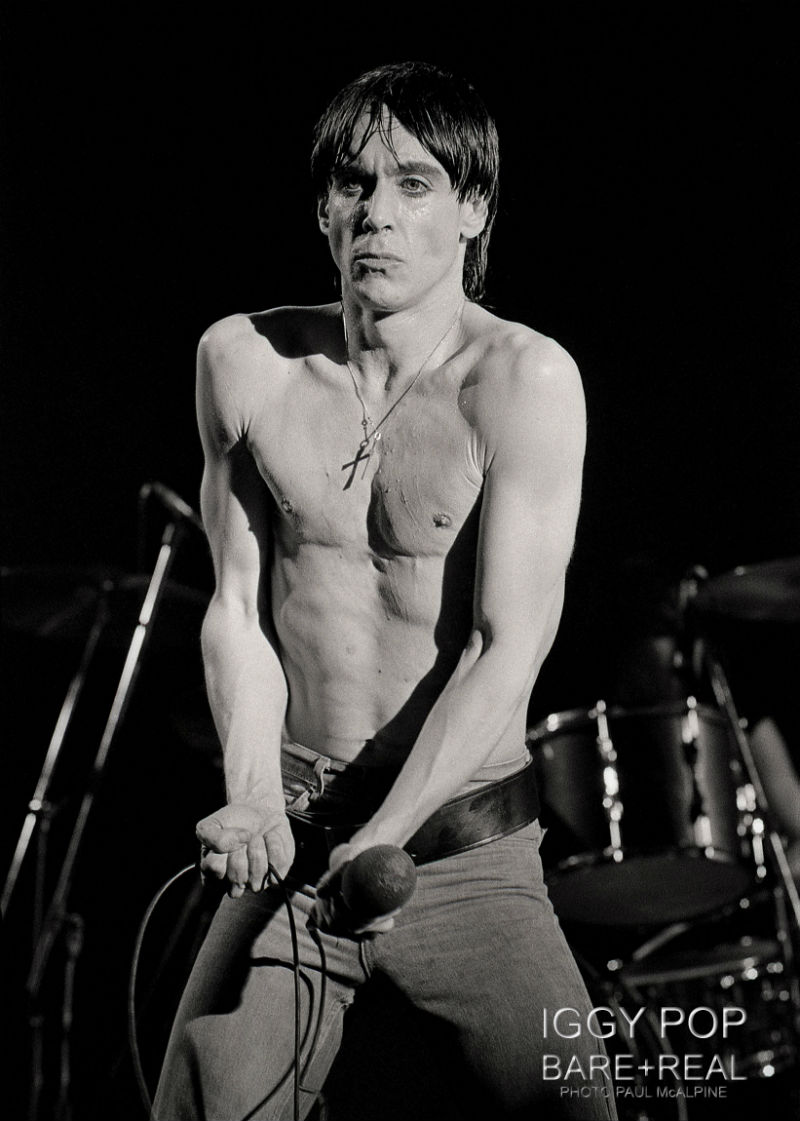 Iggy Pop during The Idiot tour. Photo by Paul McAlpine.

Q: How many times have you toured with Iggy?
A: I only shot the first American gig of The Idiot tour in Harvard Square – the film was happening and got around - then I shot a couple of nights on the Lust for Life tour and all the tours leading up to The Breaking Point tour. You know I was also on the road with other bands but I always made it a point to catch Iggy when I could. I am a naturally quiet guy in a not so quiet world. Looking back, I recall going with Iggy to shoot his first appearance on the David Letterman show 1982. We were like a couple of high school kids sneaking in a little bottle of Jack Daniels. When you look at the big picture of life things happen and you don’t realize at the time that it happened for a reason. I also love the gigs today because each night is living rock 'n' roll history minute by minute.

Q: Do you have a favorite tour or series of shows?
A: Over the years I have many favorite individual memories but the BLAH BLAH BLAH tour. We began at a tiny 500 seat dinner club in Santa Barbara and ended up doing two nights at The Ritz in NYC for the North America tour. Then it was time for me to process film and catch up with the guys in Berlin and continue shooting city to city ending up in London. I love those memories because we started with nothing but an amazing collection of songs. 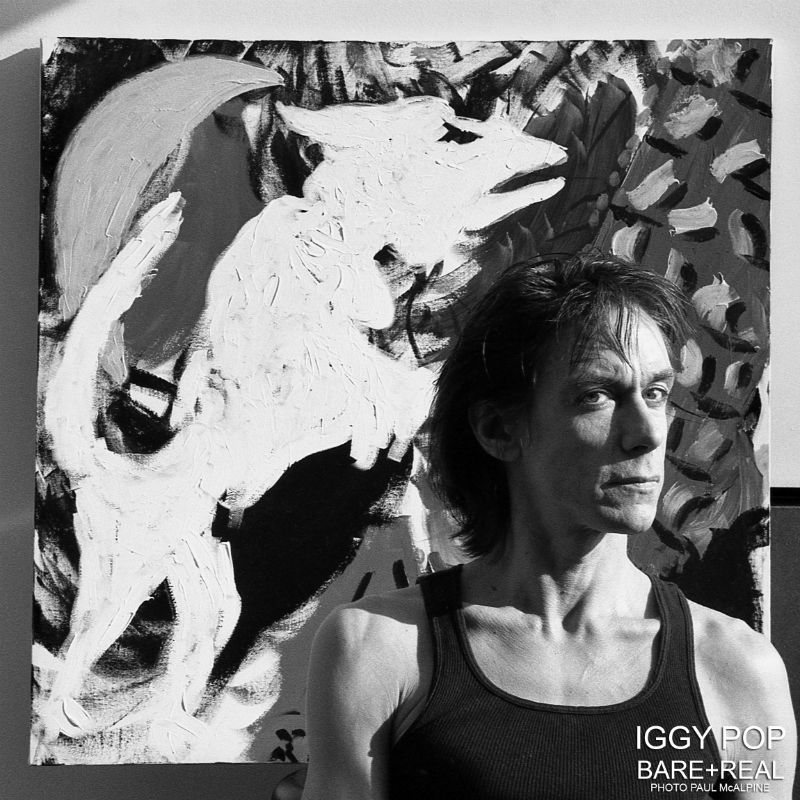 Iggy Pop posing in front of one of his paintings in New York City, 1988. Photo by Paul McAlpine.

Q: Do you have a favorite photo in the book?
A: Favorite image -- perhaps some of the early morning portraits we did in the winter of '88. This one is of Jim sitting by one of his paintings -- his work is a bit reminiscent of the painter Georg Baselitz to my eye.

Q: Which photo did you find that surprised you when you were going back through your contact sheets?
A: I am still amazed by the series of images I shot from a cold December night at Brixton Academy with steam coming off his body -- this is a powerful image.

Q: Since Iggy is also a visual artist, did he have any input or feedback on what he wanted you to capture with your photos, both in concert and in portraits?
A: I think over the years we learned to trust each other -- I am really hard on myself as a photographer.