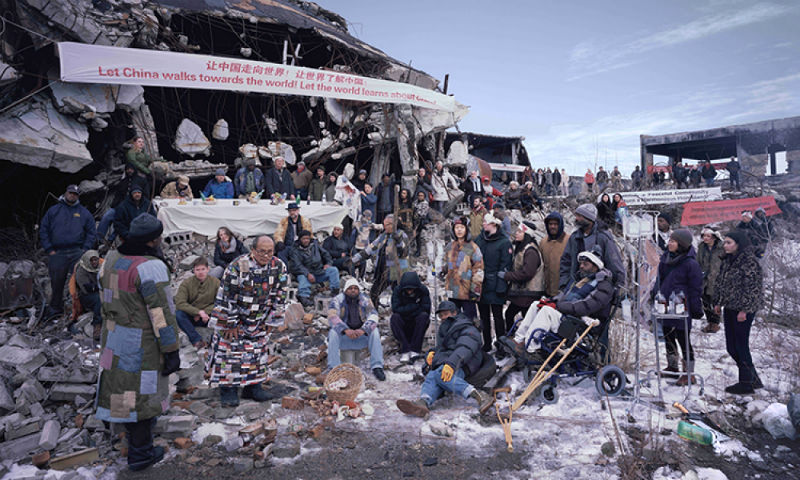 Wang Qingsong is interested in the effects of “rapid change in contemporary Chinese society.” He also sees a parallel in U.S. society, especially when it comes to the discrepancy between the haves and the have-nots, which is made clear in Wang Qingsong/Detroit/Beijing, his new exhibit at the University of Michigan Museum of Art,

Wang Qingsong restages the large-scale drawing The Bloodstained Shirt (1959) by Wang Shikuo, an iconic work of Socialist Realist art and one that celebrates land reforms in China after Communist victory in 1949. The original drawing depicts the peasant uprising against their cruel landlord and the subsequent reclaiming of the land.

In Wang Qingsong/Detroit/Beijing, Wang Shikuo's drawing forms the basis for a photo reenactment, shot in front of an abandoned Sanders candy factory in Highland Park, a city in Detroit. Wang Qingsong’s February 2018 restaging in Detroit raises questions about land use in the city while simultaneously commenting on current issues in China, which UMMA's curators note have shifted dramatically since the idealistic Wang Shikuo image was made. The curators also write that the artist originally intended to work in Beijing, where land redistribution suffers in favor of real estate developers’ interests.

Similarly, Wang Qingsong noticed that Southeast Michigan is driven by “private speculation on and the rebuilding of abandoned properties in Detroit and Highland Park that ignore the needs of most residents.” UMMA curators also note that the re-enacted The Bloodstained Shirt (2018) was intended by the artist to be shown both in China and the United States, but it is banned in China. 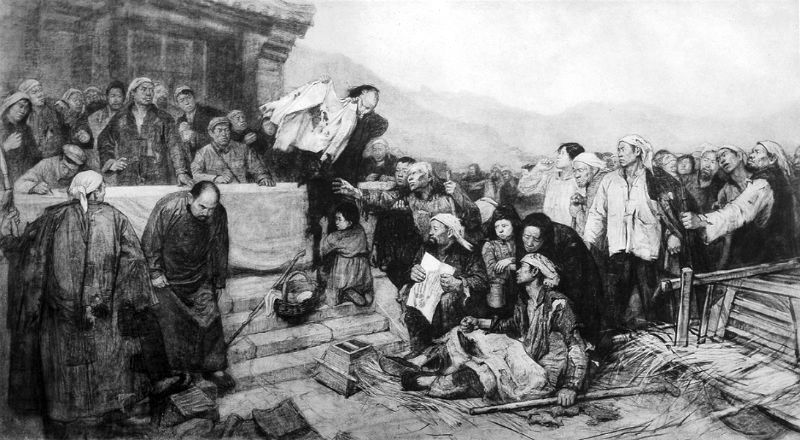 Housed in the Irving Stenn Jr. Family Gallery, Wang Qingsong/Detroit/Beijing is additionally comprised of vinyl banners, documentary images and videos of the photo shoot, costumes worn in the images, and a reproduction of Wang Shikuo's original drawing with explanatory text. The final photograph represents roughly the same scene as the original drawing. In the center of the composition, a woman holds a bloody shirt, which is revealed to be that of her dead husband. The artist plays the landlord, wearing a costume made from food labels. This costume is on display in the center of the gallery space, next to the blood-stained shirt.

Unlike the original drawing, Wang Qingsong’s photograph includes banners, which are suspended above the crowd, written in both English and Chinese. The addition of banners is the “artist’s version of the government banners, now ubiquitous in Beijing, trumpeting the ideals -- seemingly forgotten -- of the Communist Revolution.”

The laser-printed vinyl banners are attached to the large floor-to-ceiling windows in the gallery, and many of their slogans -- written in Chinese and English -- are the result of a community meeting Wang Qingsong arranged at Nandi’s Knowledge Cafe in Highland Park in October 2018.

UMMA curators point out these are made “with slogans mimicking official propaganda promoting China’s communist government and its policies, much like those in The Bloodstained Shirt. There is a sharp irony in the forward-looking and optimistic tones of Wang’s words, which belie the harsh treatment of lower-ranking citizens, migrant workers, and ethnic minorities in China. The community banners, in turn, express grievances as well as hopes for transformation and renewal.”

Government propaganda, economic disparity, racial mistreatment, and the desire for a better future are themes just as relevant in 2019 as there were in 1959.

"Wang Qingsong/Detroit/Beijing" is at the University of Michigan Museum of Art's Irving Stenn Jr. Family Gallery through May 26.