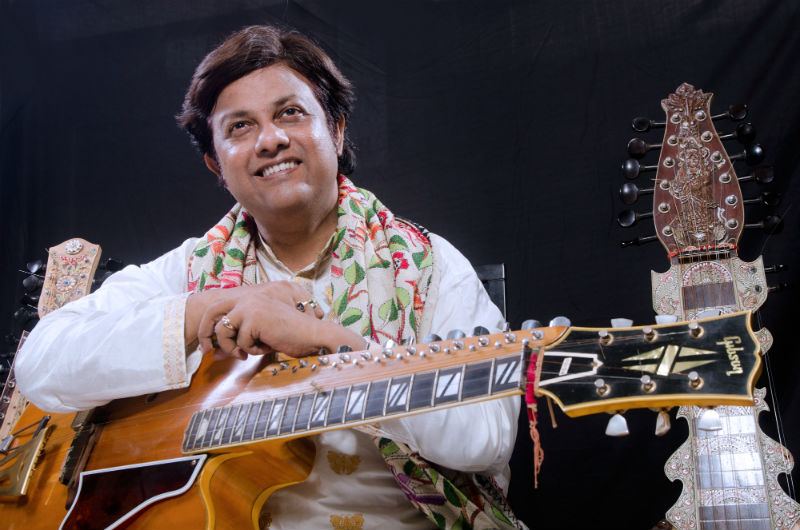 Indian classical music is not jazz, but both traditions have some commonalities, particularly improvisation, which is a critical and highly developed skill in both genres. Those commonalities -- and tons of skill -- were on display May 2 during Debashish Bhattacharya's performance at the new Blue LLama jazz club in Ann Arbor.

Indian classical music and jazz traditions are often transmitted orally. Musicians are held to a high standard of excellence. There is a tension between tradition and innovation that helps to ground the music without causing it to sound stale and boring. And in the case of Bhattacharya, who has brought the Hawaiian lap steel into the world of Indian classical music, there is a willingness to explore music beyond the traditional boundaries of style or genre.

I took my seat at the back of the club about 20 minutes before show time. My server brought me a small, single-bite portion of palak chaat, a salad of crispy spinach, yogurt, and curry created by Chef Louis that had been inspired by the evening's music. Blue LLama is very serious about its mission of combining “the love of food with the love of music” (and why there are two capital LLs in the club's name). The food is delicious and the venue has been designed from the ground up for incredible sound and vibe. It's definitely the classiest place in town to see live music.

After a brief introduction by musical director Dave Sharp, Bhattacharya took the stage with Samir Chatterjee on tabla. As they began to tune their instruments, Debashish taught the audience about his music and guitars. He explained that while his music is from the Indian classical tradition, he strives for a “universal flavor of Beyondness.” The instrument he plays is one of his own invention called the chaturangui, which is an 8-string lap steel with another 16 sympathetic strings. He explained that for the first piece it would be tuned to F# Mixolydian (an F# major scale with a flat seventh).

Tuning and talking gave way naturally to the first composition. Bhattacharya played this piece solo while Chatterjee sat calmly for about 30 minutes. The piece progressed very slowly and beautifully, beginning with long, simple melodies accompanied by the F# drone. Debashish is a master of dynamics and contrast. Sometimes the music was barely audible and then it would rise up and fill the entire space. At one point he put his steel bar down and began playing the lower strings with an egg-shaped piece of what looked to be rose quartz. He not only slid this egg across the strings in the same manner that any lap player would use the bar but also rolled it over the strings, which created a much more subtle, smooth sound. For the fast and high passages, he always used the metal bar.

During another slow passage, Bhattacharya used the tuning machines melodically, plucking an open string and changing the pitch with the tuner. Although there were a number of passages of extreme virtuosity -- very fast single-string runs played with complete rhythmic and melodic accuracy -- I never felt like he was merely demonstrating his skill. Instead, I felt as though I was on a sonic journey. The whole experience was very calming and engaging. There was a great deal of melodic development and repetition, as well a lot of very playful passages. Musical time was established slowly, and Bhattacharya didn’t really get into a rhythmic pattern until about 30 minutes into a 35-minute piece. At that point he established a fast 3,3,2 pattern, filling all of the 16th-note space with three finger rolls underneath a legato melody played on the high strings. The buildup to this high energy ending was incredibly patient and deliberate. It was truly a master class in restraint, tension, and release.

The second piece of the evening was shorter (only about 20 minutes!) and more rhythmically grounded than the first. Chatterjee's tabla was heavily featured. There was a great deal of interaction between the two masters and it was clear that they enjoy playing together. Repeated melodies undergirded by tabla patterns were developed from simple melodic statements into extremely ornamented passages. A third piece began right on the heels of the second, and this one slowly picked up in tempo from fast to very, very fast while the two musicians traded phrases, imitating and developing each other’s ideas. One interesting facet of the trading was that it was not always the same number of bars. Sometimes it was two, sometimes four, and sometimes eight, and all the while they were increasing the tempo.

By the conclusion of the third piece the duo had already been playing for an hour, and even though they had covered a huge amount of ground in terms of mood, dynamics, and pacing, it didn’t feel as though so much time had passed. At this point, Bhattacharya put down his chaturangui and picked up the slide ukulele known as the anandi, another of his own creations (and the name of his daughter, singer Anandi Bhattacharya). With only four strings and no drone or sympathetic strings, the anandi has a very pleasant, open sound. Bhattacharya called Dave Sharp up to sit in on this final tune of the set, which also featured poetry read by a young woman only introduced as Tiffany.

This final piece of the set was actually a very nice way to wrap up a really intense experience. The tune was simple, with the tabla playing the role of basic timekeeper rather than melodic/rhythmic interaction. The anandi melody was unadorned and Sharp’s bass stayed mellow and held everything together. After the set, the musicians hung around with the crowd to talk about the music and instruments. The whole vibe of the evening felt intimate, almost like a house concert -- if the house had an incredible sound system and a master chef on staff.

Bhattacharya and his accomplices played an amazing set of music at the Blue LLama. We are lucky to have a new club in town where world-class musicians as well as top local and regional talent can come and play.