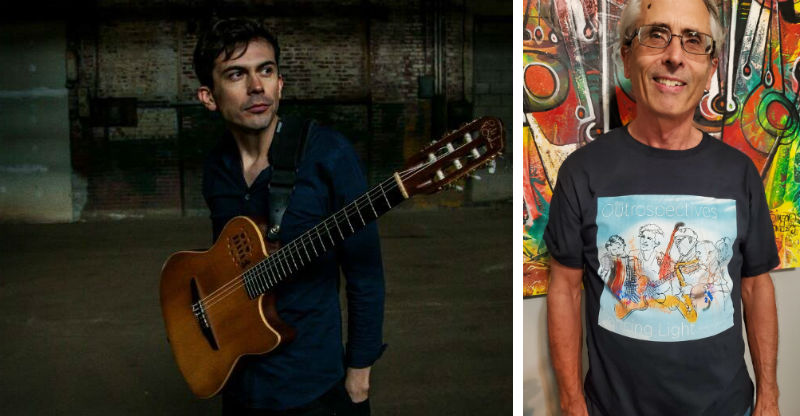 In college, I had a professor who used to enjoy asking the students in jazz history class to define jazz. He would say, “What is jazz?” and then sit back and listen to us try to answer this seemingly basic question. We know it when we hear it, but since we can’t quite put our fingers on what makes something “jazz,” we use other words like bebop, post-bop, modern, avant-garde, free, and fusion to help us out. Usually, I deplore circular reasoning, but when it comes to impossible questions, sometimes the answer is in the question itself. Jazz is what jazz musicians do. What’s a jazz musician? A person who plays jazz is a jazz musician. What’s jazz again?

On May 9 I attended the CD release show for The Outrospectives' new record, Dancing Light: Music of Gregg Hill, at Ann Arbor’s Blue LLama Jazz Club. Guitarist Elden Kelly assembled this band to play compositions by Gregg Hill. Elden arranged the music for a specific quintet of gifted musicians, and he worked with Hill to transcribe the music over the course of the past six years. What made this concert exciting were the ways in which this group and the music it played were both firmly rooted in jazz traditions, while simultaneously breaking new ground and bringing in non-jazz elements (or at least elements that are not traditionally associated with jazz).

The group itself is almost a traditional quintet, but with some caveats.

Instead of piano, there is Cory Pesaturo on accordion. Pesaturo is the only accordion player ever to graduate from the New England Conservatory. His resume is stunning, but what’s most important is his playing. On one tune he sounds like an electric piano; on another, he plays in a very traditional-sounding manner. On a third, he sounds like glass. (The instrument was used to trigger a synthesizer at times.) Pesaturo's melodic lines are virtuosic, expressive (consider the dynamic possibilities of the accordion compared to a typical keyboard), and highly developed. Like every musician in this band, he is not stuck with one approach to his instrument, and he is able to bring his influences and multiple concepts to bear in a way that serves the music, whether it’s funky, swinging, or romantic.

Instead of the upright bass that might make some of Gregg Hill’s riffs sound a bit more like typical groove-based modal jazz, there was Detroit’s Ralphe Armstrong on the electric fretless bass. Armstrong makes everything he plays his own, and in this group, there are plenty of riffy bass lines for him to develop. Never content to simply lay it down, Armstrong threw in quite a few fills and always kept his lines fresh. When he got a chance to solo (which he did on almost every tune of the evening) he often employed the fuzz, which when combined with the fretless bass and Armstrong’s mastery of the whole range of the instrument, is truly its own sound, and not one often associated with jazz. I appreciated the way that Armstrong never fully gave in to a straightahead walking line, even on the more swinging tunes. Anyone who knows his playing knows that the man can swing, but by avoiding too much traditional walking he kept the band from ever falling completely into any one genre. Armstrong’s humor and personality came through with every note he played, and because he has played extensively with drummer Gayelynn McKinney, their rhythmic hookup in this band was just about as tight as it can be. With Armstrong’s busy approach to bass lines, McKinney really holds the group together, while still keeping a conversation going between the melodic material (improvised or composed) and the drums.

McKinney is Detroit jazz royalty, but, again, she is so much more than that. McKinney was Aretha Franklin’s last drummer. She played with Speech of Arrested Development. Her playing stretches beyond jazz. Hill’s music calls for great rhythmic variety and the drummer needs to play them all convincingly. McKinney really nailed the straight-up funkiness of tunes like “Dollah Hollah.” The feel was super tight. She also excelled at the syncopated hits in tunes like the opening “Dancing Light”, with its 15/8 riff (4+4+4+3, but who’s counting, right?) and 16th-note call-off beat hits. The whole night she was catching everything the rest of the band threw at her and keeping the time feel solid. Playing with such great musicians, she didn’t need to keep time for anyone else, but she definitely kept if feeling good. A high point for me was during the tune “Mirage” where she used the mallets and some pressure on the toms to imitate talking drum sounds. It was something I’ve never heard done so well by any other drummer, and it was part of a musical conversation between McKinney and Elden Kelly on fretless guitar. That kind of interaction is one of the important elements of jazz that this group definitely had in spades.

Kelly is the creative director of this project. He arranged the tunes, picked the band, and has a huge influence on the vibe of the group. Again, if he were playing electric guitar or the typical archtop favored by many jazz guitarists, the ensemble may have slid too far into fusion or straightahead territory. Hill’s melodies are so hip, timeless, and engaging that they would sound great in a more traditional setting. Instead, Kelly played three guitars, all with nylon strings. One was fretless and one was a fretless 11-string (a single low string and five strings in double courses). All three were connected to a Roland VG-8 synth module, so the sounds he could obtain were quite varied and incredibly appropriate to the music. Kelly’s playing is masterful, reminding me of everything from the music of Francisco Tarrega to Charlie Christian to Django Reinhardt and beyond. Aside from being a fearless improvisor, Kelly is a melodic genius and has an incredible facility with his instruments. His playing is deep and joyful, and he has a very solid grasp of classical and jazz approaches with a strong awareness of the way note choice and articulation can have a profound effect on the mood of a piece.

A typical jazz quintet usually includes a tenor saxophone player. What’s less common is for that role to be held by someone who runs his instrument through an effects rig -- featuring long, bright reverbs, octaves, and possibly ring modulators -- that is more typically associated with modern rock-guitar players. Tucker Antell, who has played with Esperanza Spalding, Antonio Sanchez, and many others, is an excellent modern jazz tenor player. His tone shows that he has absorbed everyone from Dexter Gordon to John Coltrane to Michael Brecker. Antell's melodic sensibility, lightning fast runs, and embrace of noise elements demonstrate that he has spent years honing his art as well as his craft. His improvised introduction to “Dollah Hollah” was virtuosic without being contrived or showy, and it showed Antell engaging in extended techniques including very well played multiphonics, incredible dynamics, and shifts in speed and range, use of electronic effects, and altissimo register playing.

The band played the entirety of Dancing Light in order, which was a treat. Gregg Hill’s music, like the musicians who have chosen to play it, defies pure categorization. It’s definitely rooted in the jazz tradition both formally and rhythmically. Most of the tunes have an initial melodic statement followed by improvisation over a repeating chord progression. Many of the compositions feature riff based grooves and slick rhythmic figures. Often times the band would restate part of the melody in between soloists, which is a great way to make those transitions more interesting. On the other hand, almost every tune had some element that is not typical of jazz. Many of the tunes had melodies that were reminiscent of Eastern European music.

According to the liner notes on the CD, the songs were inspired by such things as sunlight moving around a room, a mirage on the horizon, and the music of South Africa. One piece was dedicated to Charlie Parker, but rather than sounding like a bebop melody, it was a mellow Latin piece in three. The songs made me think of the multiverse theory. What would jazz sound like if “Caravan” was more influential than “Take the ‘A’ Train”? Or if Miles Davis had spent a decade playing in a klezmer band? Hill himself grew up with music always playing around the house, and has been writing jazz tunes for decades, only recently putting the music out for other people to play. We’re lucky to have these new tunes -- no matter what genre label is attached.