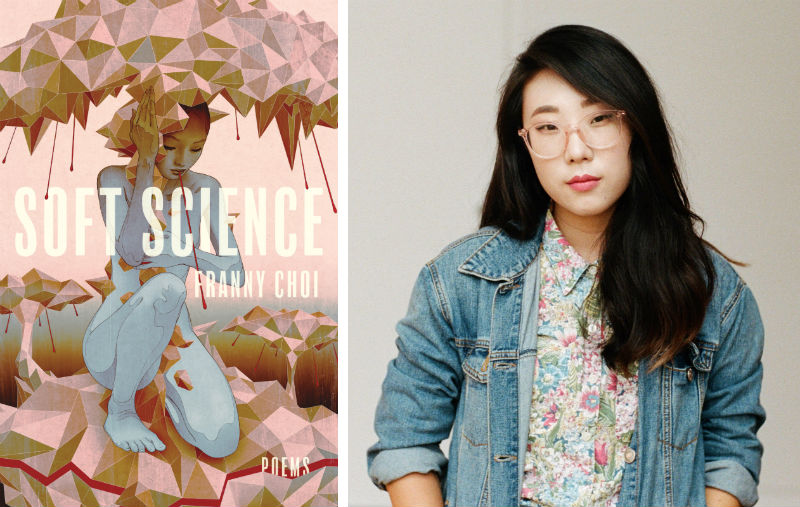 Soft Science, the title of Franny Choi’s second book of poetry, is meant as a pun. In one sense, it is a term sometimes used in academics to refer to the social sciences. Alternatively, this title describes the collection’s study of softness and vulnerability, Choi told Pulp. Both of those meanings convey the book’s examination of what it means to be alive and live with technology, a matter that Choi does not see as only binary.

“There is an alternative to simply being afraid of the ways that technology steals from our humanity,” she said. “I think that the primary way that we’re allowed to think -- not to think, but to feel -- about technology is either like [it’s] this unfeeling, perversely optimistic god that will save us, or the enemy that’s here to replace us. I think that there are more options for feeling.”

You can hear poems that explore those options when Choi, who lives in Hamtramck and recently earned an MFA at the University of Michigan, reads at Literati Bookstore in Ann Arbor on Tuesday, May 14, at 7 pm.

In Choi’s poems, there is a crossover between technology and humanness through a set of recurring poems named after the Turing Test, in which a researcher asks questions of both a computer and human to see if they are distinguishable. These poems are structured as a question and answer conversation, though the speaker responding to questions is not identified as either human or machine. Other poems also reference nature.

Choi noted, “It’s true that the book is thinking about technology, but it’s using technology just as a sort of valence to think about personhood and to think about subjectivity. To think about the natural world as a foil for what we think of as the person is part of the same project as looking at an artificially intelligent being and using that to think about what it means to be human.”

It is not only technology but also identity that Choi views as multifaceted. While she is quick to note that not all of the poems explicitly address the queer, Asian-American, and feminine identities with which Choi identifies, they do consider identities through the this “lens of technology and questions of personhood,” which she calls a “cyborg poetics.” The poems engage with both the physical and emotional components of identity, including the ways in which people of color have been dehumanized, by questioning what is natural and how identity is understood and lived with, without so much making judgments but rather exploring ideas and situations.

“For me, it’s a question of poetics, a queer voice in the poem being one that is willing to play and subvert and sometimes go in drag and be excited about the surprising combinations that are possible through language. Even if the poem doesn’t make any sort of mention of being Asian, I hope that all of my poems are engaging in the idea of foreignness or the effects of being in a body that’s marked as different, or feeling like a guest in someone else’s house, or having to use English to try to pass as being convincingly human,” Choi said.

The first “Turing Test” poem reflects this use of language when the speaker, who could be human or machine, says, “yes / i can speak / your language / i broke that horse / myself.”

Choi has considered themes of foreignness and dehumanization not just in poetry but personally.

“As an Asian-American woman, for me to love myself as someone who has been objectified, whose body has been exoticized and glorified, as well as been the site of fear of replacement, loving myself has meant that I’ve had to find different ways of feeling about those things.”

The poem, “& O Bright Star of Disaster, I Have Been Lit,” relates to this idea in the lines that read, “the wounds have been bearable / thus far. & who isn’t bruised around the edges, / peaches poured into the truck bed, receipts / faded to white?”

Choi studied poetry as an undergraduate student at Brown University and became involved with a spoken-word poetry group that brought together students of color and queer and trans students.

“I was also taking these formal poetry classes in a program that was largely white and aesthetically much more rooted in avant-garde sensibilities,” she said. “I think these two different sorts of spheres of influence are present in my writing today: this sort of spirit of innovation and real urgency to address the kinds of high stakes conversations affecting marginalized peoples.”

Choi went on to become co-director of the Providence Poetry Slam for about five years and also work as a community organizer in Providence, Rhode Island, before moving to Michigan for her MFA.

Working in the literary communities of Detroit is part of Choi’s writing. She is involved with InsideOut Literary Arts, for which she works with a program in which writers lead afterschool poetry clubs in schools.

Of Detroit, she said, “Teaching at the Detroit School of Arts through InsideOut has been hugely informative and inspiring for me. I think Detroit is a place that has a lot of good reasons to be very suspicious of outsiders coming into that space. To be able to build relationships in that space means that much more to me, and relationship building with other people has been deeply moving to me. I think it sort of solidifies what is at the center, or what has to be at the center of that work, which is a dedication to the place, a dedication to the craft, and a real love for the possibilities that are there in a place like Detroit.”

This fall, Choi is moving to western Massachusetts and will teach at Williams College.

As for what readers might glean from Soft Science, Choi said, “What I hope people take is a different way of relating on the level of the heart to these questions. I’m not a philosopher or a political pundit; I’m a poet, so I don’t know that there’s necessarily a message that I want anyone to take away or a belief. I think that what I want people to do is to come to my poems with an openness to relate to them on a personal level.”

Franny Choi reads from "Soft Science" at Literati Bookstore in Ann Arbor on Tuesday, May 14, at 7 pm.