Connor Coyne's novel "Urbantasm: The Dying City" deals in nuances not dichotomies about his Flint hometown 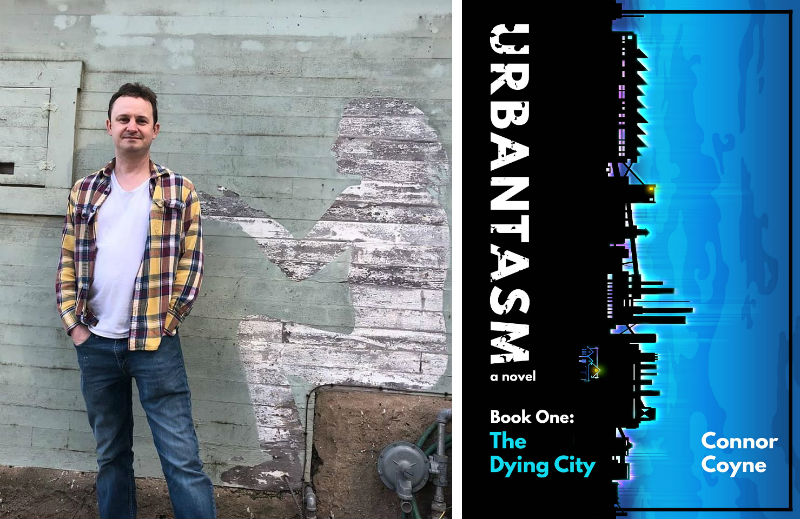 There’s usually more than meets the eye in both fiction and nonfiction. There’s more to Jean Valjean than just taking that loaf of bread. Moby Dick was more than a whale. And Flint isn’t just a town with a water crisis -- it is a city full of artists, activists, and everyday people trying to live their best lives.

And that’s the picture author Connor Coyne aims to paints in his new serial novel set in a city based on Flint, Urbantasm: The Dying City. Coyne lived in the city until he was 12 and returned after the birth of his daughter. “I loved Flint and wanted to be part of the community again,” he says. “I’ve always had this sense of the vitality and creative energy in this area ... that doesn’t always get talked about.” Coyne hopes that readers recognize his passion for the city in the book.

Urbantasm tells the story of 13-year-old John Bridge, whose big plan to become the most popular kid at his new junior high school is put on hold by a series of strange events. After taking an enigmatic pair of blue sunglasses from a person who is homeless, Bridge soon finds himself mysteriously dropped into the middle of a gang war in his hometown of Akawe. This formerly great Rust Belt city is home to a gang of white supremacists, a homegrown drug called O-Sugar that was responsible for the deaths of a group of local kids, and suspicious deaths that may have been murders. Bridge must navigate these mysteries while adjusting to a new school and dealing with problems at home and in his city.

Coyne’s teen years formed the inspiration for this book. “We had moved to a suburb of Flint by the time I was in high school,” he says. “In my sophomore year, I realized that a lot of my friends were going through intense things, many of which stemmed from the divide in household wealth. We had people who lived in very poor households to those in more stable homes and then folks who were quite affluent. It was this heartbreaking divide that I saw going on around me. About this time, I got a copy of the novel Les Miserables and it blew me away how Victor Hugo was able to use the story of one man’s journey to talk about everything [Hugo] cared about ... all of the political and economic things going on around him.”

While Les Mis took Hugo 17 years to write, Urbantasm took Coyne over two decades. “I didn’t realize how ambitious of a project this was,” Coyne laughs. “I finally finished it 22 years after I started it.”

After returning to Flint as an adult, Coyne saw the artists and writers surrounding him and decided to put together the Flint Literary Festival. “My press, Gothic Funk Press, worked with the Flint Public Library and East Village Magazine for the past two years to put on an event featuring workshops, panel discussions, and noted local authors. This year, University of Michigan-Flint is involved, and we can’t wait for our third event!”

In between festivals, Gothic Funk Press published the first installment of Coyne’s teen noir series this past fall; subsequent books will be released each September.

“One thing that I was very careful about while writing and editing was to make certain passages more lyrical and poetic," Coyne says. "There is a tendency in American literature to not do this, but I thought it was important to show that there can be poetry in the lives of young people growing up in very troubled circumstances. I wanted to make clear that they have passions and care about things just like young people anywhere ... but without sugarcoating the real challenges that they experience.”

The first installation of Urbantasm is set in 1993, so while the water crisis is not mentioned, it looms on the horizon just as did it for the city that inspired it. “There is a lot going for and going against the residents of the cities that required a historical context to understand,” Coyne says. “While the water crisis story will be told, I wanted to give a background perspective that readers might not be aware of.”

Coyne is aware of the extreme dichotomies that are often featured in stories about his hometown, but he goes for a more nuanced approach. “Some tend to write stories about Flint where the residents are apocalyptic victims of predatory systems while others paint this vision of civic boosterism where everything is on the up," he says. "I find both of these perspectives a little claustrophobic and not entirely accurate. With my fictional characters, I aimed to create people with identities that delve into a number of subjects and ideas that show both the positives and negatives of the city, just like real life.”