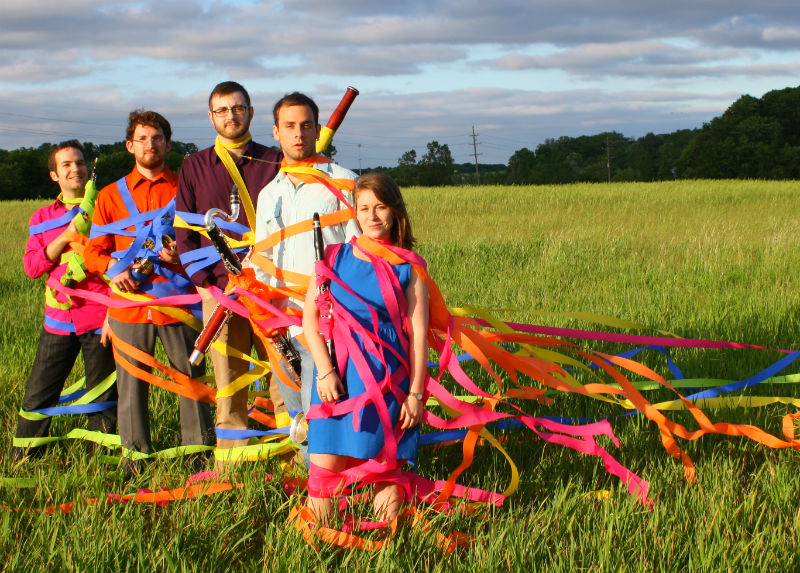 The Akropolis Reed Quintet's second annual Together We Sound Festival begins May 28 at Cass Tech High School in Detroit and continues in various spots in the city before moving to Ann Arbor on Friday, June 7, at Kerrytown Concert House (KCH). It concludes June 8 back in Detroit. Over the course of fest, Akropolis will also play two evening concerts in Detroit and Hamtramck, plus three lunchtime workplace concerts, six K-12 school presentations, a side-by-side student concert with an Akropolis concerto, and two pop-up events in public spaces. featuring world premieres by Akropolis in collaboration with local and national artists.

Founded in 2009, Akropolis members Matt Landry (saxophone), Kari Landry (clarinet), Tim Gocklin (oboe), Ryan Reynolds (bassoon), and Andrew Koeppe (bass clarinet) met when they were students at the University of Michigan. Since then the quintet has won numerous national awards, has premiered more than 50 reed quintet works, and has released three recordings. In 2014, Akropolis became the first-ever ensemble of its makeup to win the prestigious Fischoff Gold Medal chamber music award.

Akropolis will premiere a new work, Sprocket: A Scrap Metal Sextet, at the KCH concert, a collaboration combining the music of composer Steven Snowden, and a rideable percussion bicycle designed and built by Detroit metal artist and Kresge Arts fellow Juan Martinez. Percussionist Zac Brunell will join Akropolis and ride/play the tricycle which will make familiar and unusual sounds powered by the gears attached to the pedals.

I interviewed Landry, who is also Akropolis’ executive director, and Juan Martinez, the creator of the musical tricycle for Sprocket, via email to talk about the quintet's work, Together We Sound Festival, and commissioning new compositions.

Q: Your ensemble seems never content to merely repeat successful programs; instead you are constantly commissioning new works and creating new ways for audiences to discover and experience you and your music. Your upcoming world premiere of Sprocket is a case in point. How did this piece come about? Did you connect Snowden and Martinez or did they discover each other?
LANDRY: We made the Snowden-Martinez connection because we knew of both their work. Each of them, within their fields, pushes the boundaries of what definitions we have of musical and visual art. So first, we started thinking of a piece that Steve Snowden could write for Akropolis and percussion. Steve writes for lots of strange instruments, so we thought of scrapped car parts and other things you might connect with the industries of our region. Then, we discovered Juan because of the Kresge Arts fellowship, a prestigious program that gives unrestricted grants to Detroit artists. Juan's infectious and brilliant work making animal bicycles led us to think, how could Juan create something that Steve could compose for? From there, we sat down and hashed-out ideas. Even to this moment, the bike that Juan is building is still evolving as Steve finishes the composition. It's a living process and for us, it's a completely new way of thinking about music composition and collaboration. The piece Steve writes is dependent on what Juan does, and the other way around, and we all get to see our dreams come to life visually and aurally.

Q: Ann Arbor has a couple of other music/bicycle connections. In 2017, U-M professor Stephen Rush contributed a piece to Payton MacDonald's Sonic Divide project -- "making music on the world's toughest bike route" -- and the renowned jazz/blues pianist Mr. B has pedaled around Michigan -- and even the entire length of the Mississippi River -- hauling his Baldwin spinet on a specially constructed giant tricycle and playing pop up and formal concerts along the way. Were you aware of Mr. B and was that part of the inspiration for creating this piece?
LANDRY: We love Mr. B! But honestly, Mr. B was not in our thought process during most of this project. However, as we've gone through this process we've discovered tons of connections with the cycling community. Bicycles are used for so many things, and for some people, it’s their livelihood. The bicycle symbolizes freedom for some groups of people and something different for others. This new piece we're performing, Sprocket, captures the imagination of mechanical devices, the innovation of the bicycle, and also its imperfections. We've found that people who love cycling really love seeing this creation, but everyone connects with it because it taps into the simple joy of pedaling, turning it into amazing new sounds.

Q: Tell us about the other pieces on the program at Kerrytown Concert House.
Landry: We will perform an award-winning new work by Stacy Garrop called Rites for the Afterlife. It takes the audience through four stages of the afterlife as practiced in ancient Egypt. Stacy was recently awarded an American Academy of Arts and Letters Music Award. We'll also perform Seed to Snag by Theo Chandler, a piece about life cycles. Percussionist Zac Brunell, who is joining us to perform on Juan's new bike for the Sprocket premiere, will be performing a piece on an amplified cactus. Believe it or not, if you place contact microphones on a simple barrel cactus, it makes amazing sounds. Steve Snowden has actually composed for amplified cactus, so we're tying the program together by featuring one of his previous works, alongside the premiere of Sprocket.

Q: The pictures on your website range from traditional classical concert formal to whimsical, even occasionally zany. You have impeccable classical credentials and chops, and prestigious awards to spare, yet you’re going to have a bicycle on stage! No one could possibly think you’re dilettantes, relying on gimmicks, yet you’re certainly expanding the stereotypical notions of what classical music -- and musicians -- look and sound like. Tell us about your thinking behind this.
LANDRY: We don't think too hard, if at all, about public notions or stereotypes of classical music. We're guided by a drive to engage audiences; to fill them up with meaningful, nutritious art. There are a lot of ways to do that. We think that quality should be the focal point of all of it, that we bring world-class artistry to whatever we play. That's probably why we started our career playing "traditional" chamber music and going after major chamber music awards. Over the past three, four years, we've had the privilege of being able to take quality and trust we've built with audiences and infuse it into more creative, outside-the-box collaborations. New things engage new people. New colors attract new flavors of fans. We think that classical music should be presented as hip because it is! Our concerts are fresh, exciting, and thoroughly enjoyable, so why not make them look that way? And why not come up with ideas and concepts that make people excited, wondering what will happen?

Q: What’s next on the horizon for Akropolis?
LANDRY: We're celebrating our 10th anniversary! So, this coming season we're doing a 10-composer commissioning project, including a piece inspired by the Charles H. Wright Museum of African American History, and much more. We're premiering a concerto with the U-M Symphony Band, doing a two-week run of shows with BodyVox Dance in Portland, Oregon, and releasing our fourth album this fall! All this in the next year. 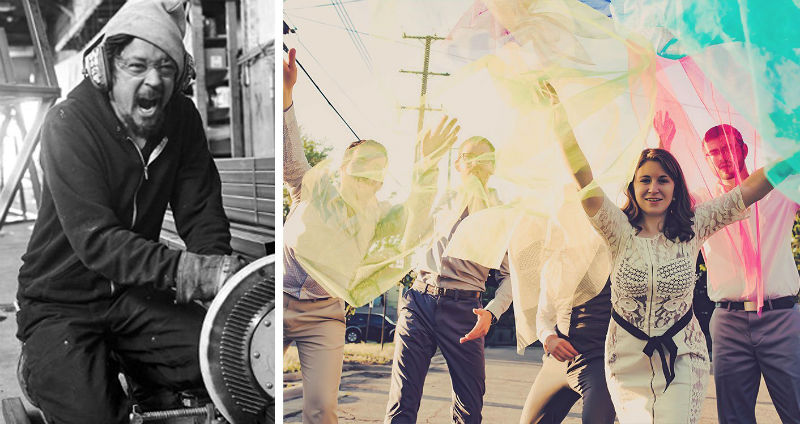 Q: You've collaborated on projects with other artists, including the author, Dave Eggers and his 826michigan youth literacy organization. Have you ever worked with a musician before?
MARTINEZ: This is my first time working with musicians or making any kind of music-related projects.

Q: How did you and Snowden work out what the bike would do, what sounds it would make? Did he tell you what he needed or did you each contribute ideas? Did you meet face to face or work via Skype or how?
MARTINEZ: We had a couple of face-to-face meetings and over the duration of the project I had epiphanies like for example, the analog programmable xylophone which required 32 pieces that each had to be 3D printed and epoxied together. We gradually added a couple more details as the design emerged and we could see the different ways a musician might approach using it or bystanders might interact with it.

Q: What were the most challenging aspects of making the bike for Sprocket?
MARTINEZ: Fitting so many moving parts on a tricycle without crashing against each other, it's really challenging. Everything had to be made to pretty tight tolerances in order to work properly. Also, working through the winter in my cold warehouse was hard. I do run some infrared heating but forget about insulation! The deadline [for this project] also coincided with my first public art piece which consists of two ridable hippo heads that are going on the corner of Lincoln and Holden St. It's been a challenge moving both of these ambitious projects forward at the same time.

Q: On June 8, the day after Sprocket receives its premiere in Ann Arbor, Akropolis will perform it again, this time outdoors in Detroit’s Dequindre Cut Freight Yard. Among your other works, you have created a number of other highly imaginative rideable bike sculptures. Will you be attending the June 8 event with some of your other bikes, and if so, will the public be able to ride some of them?
MARTINEZ: I'll have some of my other bikes there for the debut, and people will be able to ride them.

Akropolis Reed Quintet's Together We Sound Festival runs May 27-June 8, mostly in Detroit and Hamtramck, with a concert at Kerrytown Concert House on Friday, June 7. Visit kerrytownconcerthouse.com for more info.