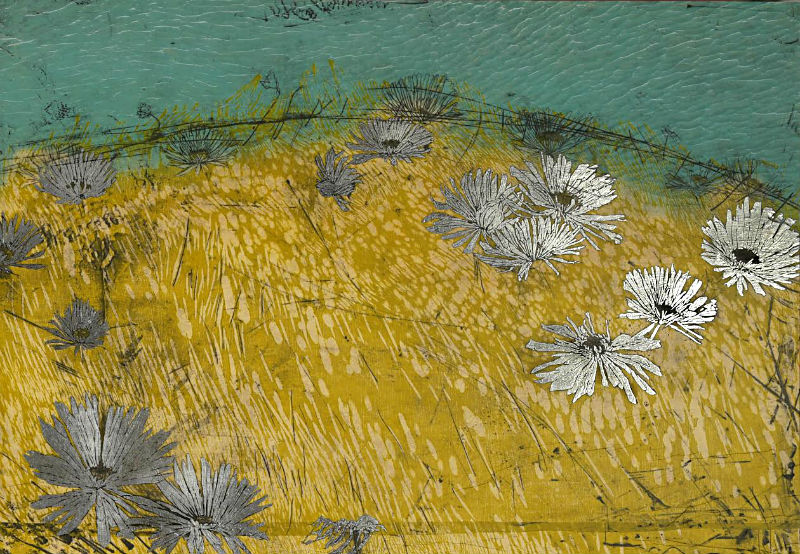 Ann Arbor printmaker Helen Gotlib is a master of the art of slow motion. It’s there in plain sight in her Secret Beaches exhibit at the WSG Gallery.

Gotlib’s vision of such arrested motion is an integral aspect of her mixed-media printmaking. It’s an intricate element of her work that follows apace in her handful of prints from composition to completion.

In large part, this suspended movement is due to the sheer complexity of Gotlib’s art. In any single artwork, there are combinations of woodblock printing, intaglio printing, acrylic paint, India ink and gold or palladium leaf on her carved birch panels.

As Gotlib says in her artist’s statement:

My primary visual concern has always been to document nature by focusing on its strengths rather than beauty. Simultaneously subtle and overwhelming, it confounds us with its infinite system of outwardly chaotic patterns within patterns and uncannily expressive forms.

Concurrent to my expansive beachscapes I have shifted and narrowed my focus to the abstract possibilities of wood grain. By changing the context of the interior of a tree, the connection to the original object nearly disappears, [evoking] the movement of water; [revealing] a hidden aquatic landscape.

The modest diffidence here, of course, is that Gotlib is making the private public. Just as her claim to focus on nature’s strength rather than beauty is also modestly misleading because there’s plenty of both strength and beauty in her work.

The strength is certainly there in the sheer effort it would take to craft any single one of these prints. But an element of beauty is also undeniable as Gotlib focuses intently on the underlying elements of her compositional design.

It’s this honing of strength and beauty in her art that crafts a complementary aesthetic out of the seemingly contrary forces she finds in the natural world.  And it’s through this interdependent that Gotlib finds her signature. 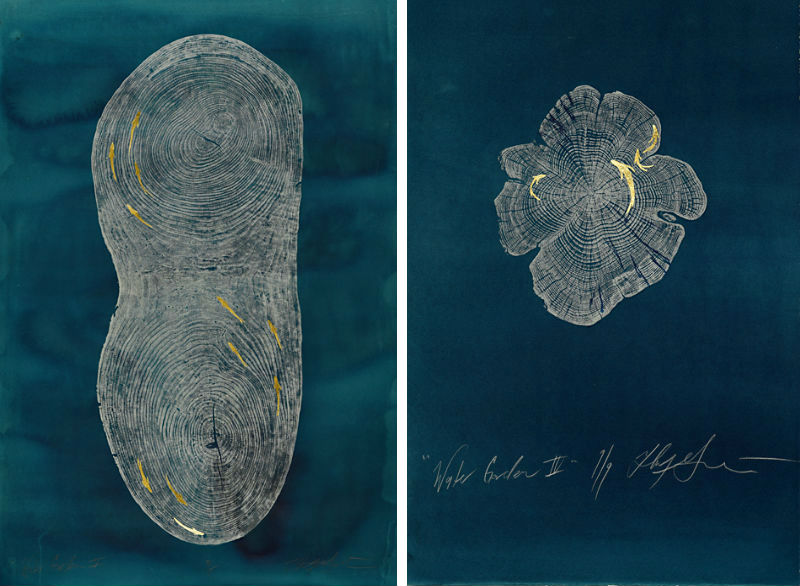 Set on an acrylic ground, this woodblock ring with overlaid writhing gold-leaf fish creates a complexity upon complexity whose multiple visual planes are akin to watching a receding watery depth -- receding, that is, as if the depth was lying flat on a wall surface rather than from underneath. By plotting her aquatic foreground within the striated rings of the wood, Gotlib creates a dramatic dynamism that activates the working surface.

The second compositional strategy in Gotlib’s exhibit is a far more complex set of prints whose motion shimmers on her working surface. Her Sea Ranch Flowers IV is a masterful tetraptych of outsized ambition whose rippled plywood backing seemingly undulates against an adjacent landscape feathered with flowers.

The sweep of the landscape alone makes this print one of a kind as Gotlib’s palladium blossom shimmer on the working surface. The arrested motion of Gotlib’s Sea Ranch Flowers is nothing less than a stunning visual tour de force as her flowers memorably dance across the composition. It’s a subtle treat that must be seen to be fully appreciated.