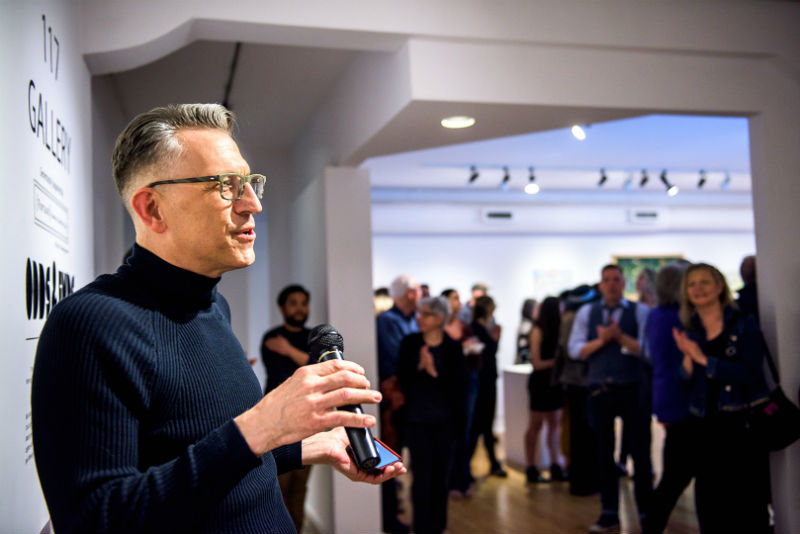 In the 1990s, John returned to his studio with a newfound interest in making art on his own terms, and it resulted in an outpouring of new work. Exploring the media of assemblage (through found objects), collage, printmaking, and installation, he was inspired by the works of Joseph Cornell, Betye Saar, Lucas Samaras, outsider art, Art Brut, and religious art to evolve his own unmistakable style: a perfect mirror for his gregarious, highly animated personality. The obsessive collector in Gutoskey met the trained visual artist half-way.

Gutoskey’s background in assemblage and collage is a perfect match for the content of this exhibition, which includes 2-D collage work, sculpture, mixed media works, and assemblage. Gutoskey selected winners for Best in Show, Second Place, Third Place, and three honorable mentions: 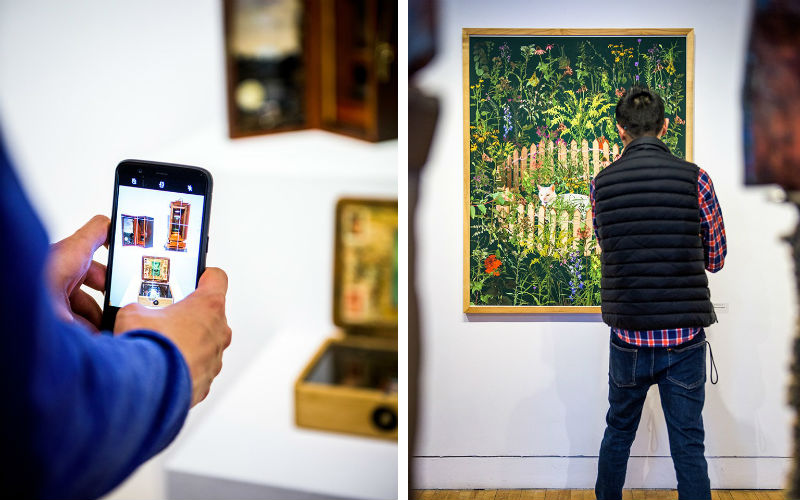 Left: A exhibition attendee photographing a detail from one of Jarrod Houghton's Best in Show entries. Right: A work by Morgan Barrie. Photos courtesy of Ann Arbor Art Center.

Jarrod Houghton’s three-piece installation is comprised of three individual mixed-media sculptures: New Orleans, Moon Shine, and Rock Paper Scissors. The sculptures are each made from wooden boxes that have been repurposed with assemblage.

First, New Orleans is a wooden case with two compartments, each side containing a collage of artifacts related to New Orleans. Moon Shine is a thin, vertical cabinet that displays a glass jar. Beneath the jar is a small drawer that slides out, inside of which is a photograph of men working on, presumably, making moonshine. Rock Paper Scissors contains a smooth, round rock, a piece of paper (a playing card of Devil’s Tower with an alien spaceship that says “We are not alone”), and scissors under glass. The box opens from the top, and the opened inside cover displays another collage, this made from a map, playing cards, and a photo of a young boy sewn into the assemblage with the words “rock/paper/scissors” also embroidered over the photograph in red thread.

In his artist statement, Houghton says these pieces are part of an “ongoing body of work about the human landscape,” in which he is “investigating the visual ideas of human actions creating a dystopian future world.” These dystopian futures are not far removed from our reality, so that the viewer may see themselves in this future and recognize it as an “eye-opening, voyeuristic endeavor.”

Loralei R. Byatt, a Detroit-based artist, won second place with her work Intersections. The three-piece work is made from x-ray boxes, photographs, circuit board schematics, and numbers. Three x-ray boxes stand vertically with a smaller, horizontally placed box in the center. The boxes are lit up and are overlaid with photographic images of power lines printed on a transparent substrate. Numbers, circuit boards, and charts also appear layered on top of one another to create the collage element of the works, which are then illuminated by the x-ray boxes, allowing all layers of the imagery to be seen. Byatt describes herself and her artwork by saying, “A term that is trending now is multipotentialite (a person who has many different interests and creative pursuits in life).” In her practice, Byatt works with a variety of media and seeks to push boundaries between disciplines with her juxtapositions, a few of which she lists: art/science, self-portraits/numbers, fine art/graphic art, and photography/collage.

Don Coulter, an Ohio-based artist, won third place with his piece First Avenue Part II: Urban Decay, a large multi-media work made from leather, suede, denim, fabric, wood, and hair. Coulter generally works with leather and suede as his fabric of choice, as texture plays an important role in the finished pieces. Denim is another fabric of choice, and all can be seen in the complex layering in this particular piece, which is an excellent example of how texture adds to the realism of the urban landscape. Other materials Coulter has employed in his highly detailed fabric works, which resemble paintings, are outdoor grill covers and aluminum pans. Coulter only uses an X-ACTO knife in the production of these complicated works. From a distance, the large fabric collages could be made of any number of materials. Upon inspection, the level of detail achieved with an X-ACTO knife and scraps of discarded fabric is astounding. Coulter cites his influences, which include hip-hop and pop culture, his history of fashion design for break-dancers and hip-hop artists, and jazz music.

Théo Bignon, a French artist currently living in Chicago, received honorable mentions for his two pieces in the show, both archival ink prints of digital collages. The first, Blue (Bulge Series), is an amalgam of cropped, close-up men’s underwear on a blue background. The central composition resembles a flower in bloom. The second work by Bignon in the show that also received an honorable mention is titled Lavender (Bulge Series) and contains the collaged, cropped undergarments, this time repeated many more times across the composition, obscuring the original imagery even more than in the previous work. Bignon describes his work in his artist statement, saying it “explores the intersections of desire, ornament and queer identity.” It also references French Rococo, needlework traditions, and “handicraft textile techniques such as embellishment, fabric manipulation, and piecework.” Bignon uses obscured imagery to comment on recent censorship by online platforms such as Tumblr as recently as December 2018. 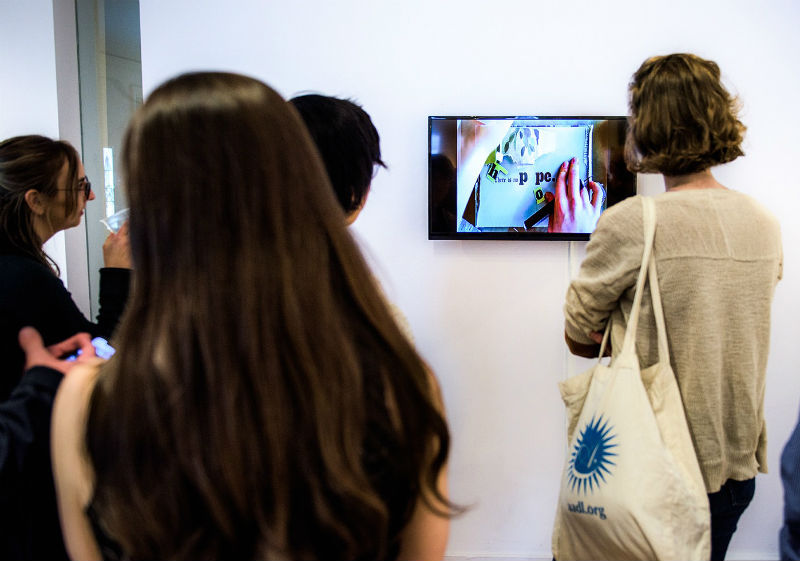 Molly Haig is a graphic designer based in Boston. Her video, A Little Called Pauline, received one of three honorable mentions. The video is created by combining frames of a book and pieces of paper, being arranged, ripped apart, and altered. The work is based on language by Gertrude Stein, and creates a poem through its “paper textures, newspaper-headline-inspired type, and flashes of New York Times clippings -- a sort of choreographed collage, or maybe a collage in reverse.” Haig’s interpretation of Stein’s language is an innovative approach to the idea of collage.

The works in Odds & Ends push against traditional boundaries and ask how collage is integrated into contemporary work in a myriad of ways. These works and artists ask us not to abandon tradition but adapt it in new ways to express current human concerns. In addition to the five artists above, there are 28 artists represented in the show, some of whom contributed multiple pieces: