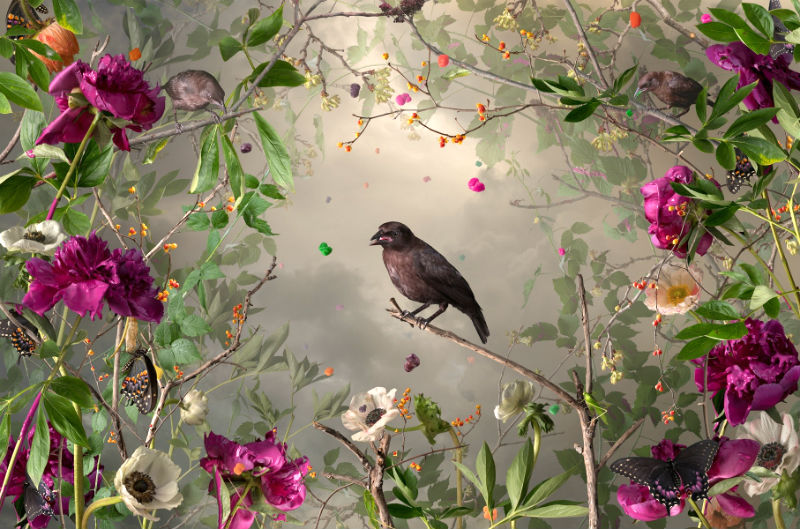 Jason DeMarte's intimate solo show Garden of Artificial Delights mixes the domestic, the “natural,” and the artificial to create a room-sized simulacrum of a still-life at the University of Michigan Museum of Art.

DeMarte takes over the space with his take on classic floral wallpaper, a foreboding gray background with a warm foreground containing peonies, poppies, and female cardinals. The stage of the exhibition is the entire ArtGym, a relatively cozy gallery space that houses DeMarte’s room-sized adhesive wallpaper, and six framed photographs. Each photograph is digitally manipulated and portrays what appears to be at first glance a traditional still life. The color palette and inclusion of floral elements in each photograph echo the wallpaper, with a gray, dreary fog contrasting against vibrant flora and fauna.

Except, it isn’t always flora and fauna featured in the frames of these photographs.

Instead, multi-colored candy floats through the dreary atmosphere, paint drips over a peony and covers a bird entirely, or perhaps canned whipped cream covers wilting flowers from which butterflies are attempting to feast. In the center of the gallery space, there is a square black bench that viewers may utilize in order to absorb the 360-degree immersive experience created by the wallpaper.

Each photograph is a digital photomontage comprised of multiple images, edited to appear “hyperreal,” as UMMA’s Assistant Curator of Photography Jennifer M. Friess observes. The resulting works of art are seductive, pulling us into the dismal yet confusingly bright and vibrant world of the birds and their candy.

Friess notes that the seductive quality of the images mimic the way advertisements seduce potential customers. In these images, however, the enticing quality is met with an equal sense of unease. Looking at the photographs, we see melting flowers and anachronous environments, with consumer goods replacing or encroaching on the unsuspecting natural world. 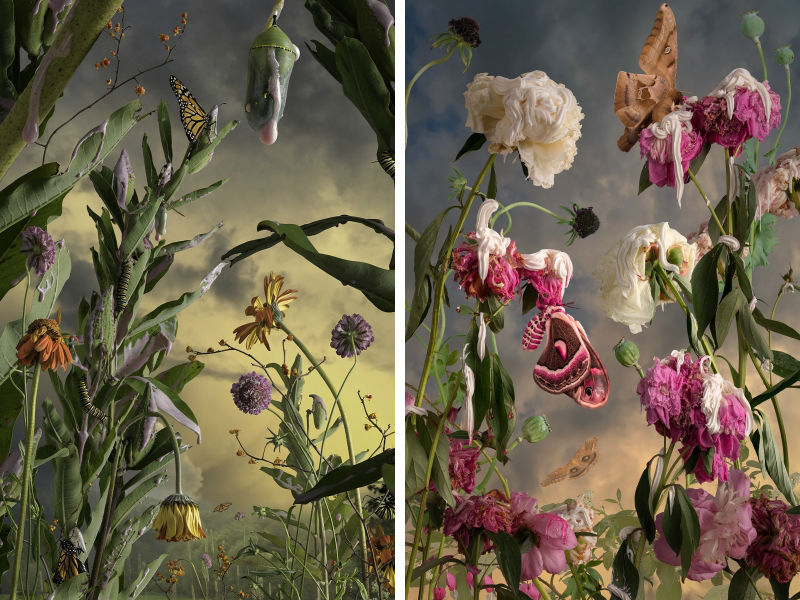 DeMarte’s works immediately reference the tradition of still-life painting. Friess notes that “DeMarte’s illusionistic landscapes recall the long tradition of still life painting in Europe and America, and a rich history of fantasy environments represented in literature and film -- from Alice’s Wonderland to Willy Wonka’s chocolate factory.” The element of fantasy is evident in the inclusion of surreal environments, with candy floating in the atmosphere or a frothy foam emerging from a cocoon.

In the gallery wall text, Friess also likens the works to 15th-century Netherlandish artist Hieronymus Bosch, Frank L. Baum’s #The Wizard of Oz#, and to the work of 19th-century American artist Martin Johnson Heade. Heade’s paintings bear a formal resemblance to the work, sans the sugary sweet imagery, and his work often depicts “illusionistic scenes of decadent behavior, exotic flowers, and strange wildlife,” that both “signify and warn against the excesses and ephemeralities of their time.”

Like Heade, DeMarte captures a similar formal approach in his compositions, and also seems to warn us about the excesses of culture, though they may differ more than 100 years later.

DeMarte’s work raises concerns about the impact that these sweet, commonplace, colorful products might have on the natural world. What will happen to the birds as they ingest the artificial ingredients in the Nerds, the gummy worms? This draws out a few threads with which the viewer can engage with:

What relationship does human production and intervention have on the natural world?

What role does imitation, surrealism, and fantasy play in our image-saturated culture?

What does our current moment of excess look like, and how does that weave into the tapestry of the past?