Art and "Soul": Honey Monsoon's new album looks for the light within 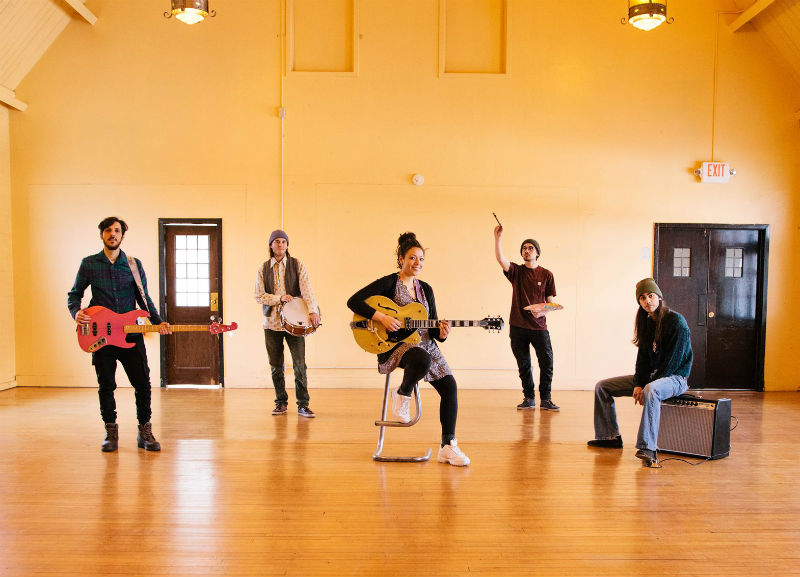 For local band Honey Monsoon, music and art spring from the same well of creativity.

That dedication to artistic exploration comes through clearly on the band’s second album, Opal Soul, which offers an engaging, irresistible mix of neo-soul and jazz with some world-music elements neatly woven in. For the album, Honey Monsoon's core musicians -- Ana Gomulka, guitar, vocals, keyboards, music, and lyrics; Taylor Greenshields, drums, percussion, recording, and mixing; Sam Naples, guitar, vocals, and mixing; and Binho “Alex” Manenti, bass and keyboards -- are augmented by a horn section and other musicians for a full, layered sound.

“Opal Soul is very much about reflection and finding the light within,” Gomulka said. “I'm madly in love with exploration, healing, and the journey back to my higher self. Listening to this music is an invitation for all to make the journey with me.”

Both music and lyrics on Opal Soul reward a close listen. One of the album’s highlights, “Sign of Life,” starts out as fairly straightforward pop, then the horns jump into an avant-jazz groove, followed by an acid rock guitar solo, with all the elements ultimately mixing into a cohesive whole.

All the songs on the album deserve attention, but two other particular highlights are “Cloud,” an irresistible, neo-soul single full of gorgeous hooks; and “Clarity,” a compelling song about finding that precious concept and learning to let go of the past that builds to a rich, extended groove.

Gomulka took the time to answer a few questions about the new album via email.

Q: What’s the story behind the name of the band?
A: I get asked about the name Honey Monsoon a lot. Its origins are very visual to me. Around the time I met Taylor and asked him to collaborate on my songs, I was in a very creative state and I was painting often, and songs were coming out of me almost uncontrollably. And I remember working on some art by myself one day and really trying to think about how I wanted the music to feel. It has never been about any particular sound or style, but rather the emotion that is conveyed and the state your body and mind are in when you listen to the music. So, I'm contemplating all these things, and in my head, I began to see a pink-purple sky in the desert, like the moment before a storm in the driest of places, and golden gooey honey falling from the sky. It felt refreshing and sweet and the name stuck with me.

Q: What about the name of this album?
A: Opal Soul first came into being when the band hosted a drum circle and show at Dreamland Theater in Ypsi in summer of 2017, before Rose Gold was even recorded. We themed the show "Jungle Beach Party" and put together a one-night-only band consisting of a few of our friends and us and named that group Opal Soul. It was a great night and the words continued to resonate, so when it was time to put out our second album, that was what we ended up deciding to use for the title.

The beautiful thing about words is that the more you ponder them, the more they give you meaning in your life. So as we were finishing the album up and in the process of putting it out, we spent a lot of time around opals, basking in their iridescent glow, going to the local crystal stores and drooling over their reflective perfection. The hard rocky outer part, when broken open, reveals the most magical and colorful crystal; similarly to how one may hide their true self, or allow it to be covered up with the muck and toughness of life. In this music, I felt myself breaking the barriers of my external shell and allowing my inner self to shine brightly. The whole album feels like that to me, and I want others to feel their soul shine like opal as well!

Q: Your website notes that Opal Soul is something of a change of pace from your first album. Did you make a conscious decision to move in a somewhat new direction, or was it a natural evolution?
A: I temporarily develop new song styles that evolve as I continue writing. We produced Rose Gold in 2017 and it is very raw. It was our first shot at compiling the sounds we were really only used to playing live. It was one of Taylor's first shots at producing, it was my first time really spending time in the studio and we taught Emory, who played saxophone, the songs the same day we recorded them. I don't think we actually realized what we were doing, or trying to do, and we definitely look back on the album with a chuckle and a lot of good memories.

In Opal Soul, it's apparent we've all naturally done a lot of growth. After reassembling over half of our band members, our sound has become more cohesive, and so the songs were able to develop a lot more. I'm in a totally different songwriting universe right now than I was when I was writing Rose Gold. I'm heavily inspired by world music and neo-soul. With the addition of a horn section, and the incredible music community in the greater Detroit area, we were able to add so many different textures and colors to the production. Taylor, Sam, and Alex are all well-versed in production and we were able to spend more time thinking about the studio version of our songs and it made a huge difference in the sound of this album.

Q: What’s your approach to songwriting?
A: I started songwriting when I was 12 years old. I loved the quietness, romantic-ness, and vulnerability of Americana, and I would write the chords first, then the melody, and usually the lyrics would emerge somewhere in that process. I've diverged and experimented with a lot of different writing processes since then.

I learned I'm passionate about mysterious lyrics. I love to find the meaning in any given song or poem that resonates with me. Often, I don't even know what my lyrics mean until much later down the road. Sometimes I start with a melody and build completely around that, sometimes -- like when I wrote “Fruit and Fire” -- it starts with a bass line and builds upward. The latter is where I'm heading right now with writing, I'm really trying to focus on the groove. So to answer the question, each song is totally different, but my favorite songs --and my best work-- has often been written all at once, like a download to my brain. I can usually hear the entire song, lyrics and all, and it’s very memorable so I can bring it into the real world. Or it ends up as a voice memo on my phone that I forget about, and revisit months later, almost always holding the same creative intensity of "I need to finish writing this right now!"

Q: You are an active visual artist as well as musical. How does your background in visual art inform your music?
A: Visual and musical art are the exact same to me, a portal for my emotions. I spent a lot of time working to convey the same emotion with art and music and it was one of the most fulfilling creative experiences for me personally. Being able to paint a feeling as abstract as confusion, then sitting down at the piano and singing the same feeling is a massive release and healing process for me. I often associate songs with colors similar to an aura, for instance, our song “Hushed Tones” is this beautiful burnt/pumpkin orange and almost every time I play it I see that color. I know, it's super weird.

One of my favorite performative experiences of all time was a four-hour improvisational set we played at Tangent Gallery in 2018 and at one point I got to paint and sing simultaneously to the music happening around me. It was very liberating to experience that live in front of an audience and I want to do it again soon! I've most recently fallen in love with sculpting clay. I really enjoy the tangibility of the art because it makes me feel more grounded and connected to the earth. I'm still not sure how that is going to connect with my music.

Q: Opal Soul feels very much like a proper album, which is becoming something of an outdated concept in today’s musical world. Is there still a place for “albums” in 2019 and beyond?
A: There is a place for every kind of music in 2019 and beyond, regardless of the format of distribution and unrelated to the length of the project. We are living in a time when everything and anything is possible in the realm of creation! Just because people have an increasingly short attention span does not mean people should change their natural process and conceptual ideas for music.

Honey Monsoon plays Top of the Park at 7 pm on Thursday, June 27. Admission is free. The band also plays July 13 at Northern Lights Lounge in Detroit and July 28 at Cultivate Coffee and Taphouse in Ypsilanti with Rachel and Dominic John Davis.